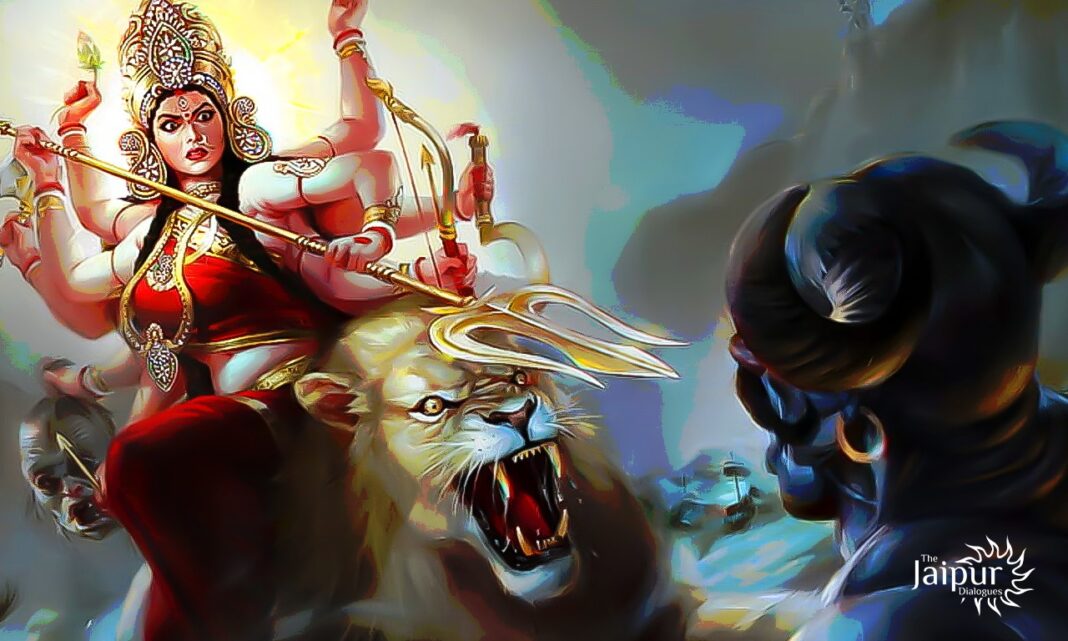 In India, Navratri celebrations are in full swing, a time of gaiety, energy, worshipping, celebration, and positivity. Navratri’s are celebrated differently across states, but the theme remains the same, i.e., worshipping Shakti Swarupa. Sanatan Dharma gives equal worth, respect, and value to women, unlike Abrahamic religions.

‘Maa Adishakti’ is the power source that the Trimurtis draw their power from. Mahadev separated Maa Shakti from himself, to help Brahmadev lend the energy to create the universe. Compared to human energies, the collective energy of divinities lies at a higher evolutionary level. Even though, Trinity Energy stands out from the rest. A synthesis of their distinctive energies is the highest level.

As the Shakti of Ishwara, this energy represents Mother Goddess. Ishwara is known as the awakened Brahman. As a result of their dynamic and creative nature, Brahman provides a space for Shakti.

Prakriti or energy source instills ego consciousness and is thus regarded as a vital tool for an individual. The ego component is driven by the mix of three Gunas: Sattva, Rajas, and Tamas. The activity of the senses and the push of desire nourish and encourage an individual. These factors, when combined, give one a sense of identity, propelled by one’s mental faculties and awareness of one’s body.

Hinduism understands the divine Shakti and the importance of its presence. Navratri celebrates the triumph of good over evil. Navratri festival is celebrated before summer and winter, a tradition started by Lord Rama. Shree Ram also performed Durga Puja before leaving for Lanka and returned victoriously. Navratri refers to nine days, each with its significance. Durga Maa is worshipped here in the form of Kali, Lakshmi, and Saraswati.

For the first three days, Durga Maa is worshiped as Maa Kali, the one who destroys all our impurities.

For the next three days, she is worshipped as Mata Lakshmi, one who bestows abundant wealth.

During the last three days, she is worshipped as Mata Saraswati, one who blesses people with knowledge and wisdom.

The nine forms of Durga which are worshipped are the following:

The festival of Navratri commemorates the victory of Maa Durga over Mahishasura, a powerful demon. The demon Mahishasura was not an ordinary demon, as he had been blessed by Bhagwan Shiva after deep penance. His blessings from Shiv Ji granted him immortality and protected him from death. As a result of receiving this boon, he began the dance of destruction, killing innocent people on Earth. To eliminate this evil demon, Maa Durga was born.

When this destruction took a nasty turn, the trinity, i.e., Brahma, Vishnu, Shiva, and all the other Devtas, combined their power to manifest Maa Durga.

For nine days, Maa Durga and Mahishasura fought intensely. However, on the tenth day, Maa Durga beheaded Mahishasur. It is for this reason that Maa Durga is also called ‘Mahishasurmardini’.

The nine days of Navratri are therefore symbolic of the battle between Maa Durga and Mahishasura.

Another belief holds that Shree Ram worshipped all nine forms of Maa Durga for her blessings to destroy Ravana, the demon king of Lanka. It is considered that Dussehra commemorates the annihilation of Ravana on the tenth day after Shree Ram defeated him.

Throughout India, the Navratri festival is celebrated with fervor and zeal. The goddess is most commonly worshipped as Maa Kali in the East, and various pandals are erected to celebrate her. Western India celebrates this festival with Garba and Dandiya dance forms, especially in Gujarat and Mumbai. A cultural tradition called “Ghatasthapana” is practiced in Maharashtra by women who perform rituals and observe cultural traditions.

Navratri celebrations invigorate people with energy and positivity, and they reinforce their belief in good over evil. Sanatan Dharma isn’t a cult or a sect based on authoritarianism, where one person’s or one organization’s diktats are considered sacred. To attain spiritual salvation, one needs Shakti, which is considered an indispensable part of the Sanatan Sanskriti. To attain holistic growth, the Sanatan Parampara emphasizes imbibing values and incorporating energies from both Shiva and Shakti. While women are treated as mere objects in Islamic nations like Iran, Bangladesh, Pakistan, etc., in India they are respected and worshipped. Unfortunately for a long now, attempts are being to malign Hindus and deliberately misappropriate our cultural symbols and deities. It is vital that Hindus return to their original path and understand the essence of Sanatan Dharma rather than being influenced by the false narratives that are peddled today.