Females and Their Position in Sanatana Dharma 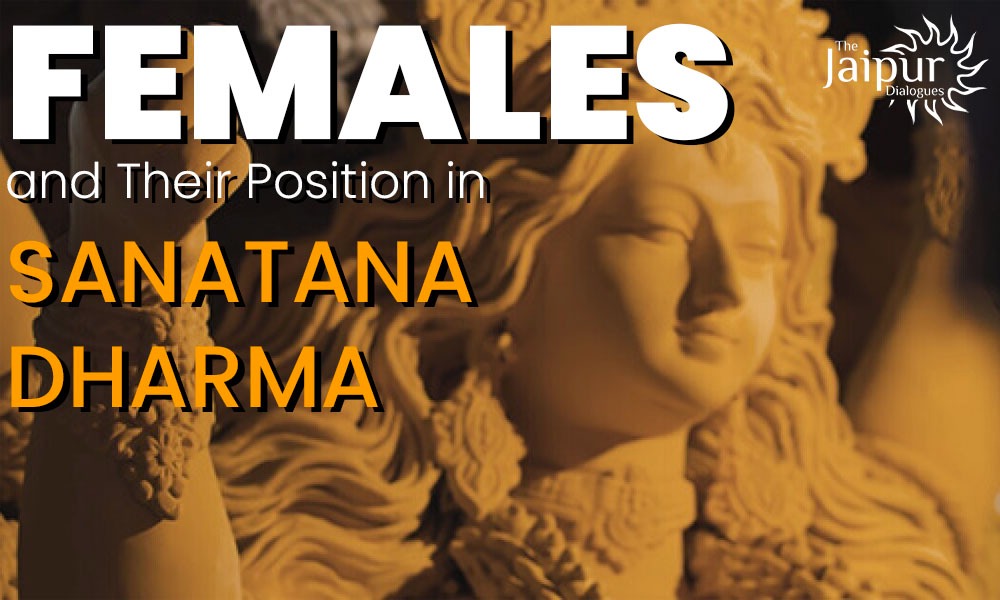 Females in Sanatana Dharma have always been accorded equal respect as males, unlike claims by the entitled liberals. The current ill-practices against females is associated with the invasion of the tyrannical Abrahamic forces.

Sanatana Dharma has always been portrayed by the biased western media as regressive and demeaning to women. Furthermore, they falsely accused Sanatana Dharma, conveniently whitewashing their white lies. Women have had equal status with men in Sanatana Dharma since time immemorial. There is even a deity that represents this, Ardhnareshwar. Shiva and Shakti are worshipped equally in this form.

Women as an embodiment of Shakti

It is believed that Shakti is the female manifestation of nourishment, protection, fertility, growth, calmness, and love. Hinduism is the only large religion that focuses on empowering women. Sadly, because of barbaric Islamic rulers’ attacks on us, our indigenous social practices have suffered. Women’s equality and mutual respect today are not as ideal as they used to be. In Hinduism, women are encouraged to occupy the most revered positions in spiritual leadership.

Hindu scriptures emphasize the qualities of both male and female divinities and the oneness of both genders. In Hinduism, we believe each human has masculine and feminine traits. Women and men have equal rights to perform Vedic rituals under Sanatana Dharma. Vedic culture, which was more than 3000 years ago, had no concept of feminism or feminazism. Despite this, women had a respectable status in society. Women and men enjoyed a level playing field. There was freedom of expression and liberty for women at that time.

The feminine forms of the Hindu goddesses are said to have originated during the Vedic period. Various feminine energies and qualities of the eternal Brahman are embodied in these female deities. The popular depictions of today, i.e Goddess Kali as destructive energy, Durga as protector, Lakshmi the nourisher, and Saraswati symbolize creativity.

Role of Women in Sanatana Dharma

Be it as a human or as a divinity, females in Hinduism have played a significant role since ancient times. The Vedas were written by women sages, who played an integral role in creating them. Lopamudra and Maitreyi composed hymns in the Rig Veda. Sage Gargi played an important role in the Brihadaranyaka Upanishad by posing various questions to Sage Yajnavalkya. She raised pertinent questions regarding the nature of the soul and made Yajnavalkya articulate teachings about the nature of the soul that many male philosophers failed to. Diverse Puranic texts contain stories and symbols devoted only to the feminine divine. Devi Mahatmyam and Devi Bhagavata Purana provide prominent examples of poetry, dance, drama, and worship. The women who chose Vedic studies were called ‘brahmavadinis’, because of their intellectual strength. Women who chose marriage instead of education were called sadyovadhus. In this period, co-education was the norm, and both genders received equal attention from teachers. As uncommon as it is today, Kshatriya women received arms training and were taught.

Certain rites of passage were traditionally designed for both genders during the Vedic era. The sacred thread ceremony, which signaled the beginning of one’s religious education, is now the province of men only. Though now these rites are being conducted for both boys and girls on a smaller scale.

Vedic ages had eight types of marriage systems, of which four were more common. In the first type, a daughter was given as a gift to a learned man in the Vedas, it was known as ‘brahma’. In the second case, when a daughter was given to the priest presiding a Vedic sacrifice, this was known as ‘daiva’. The third type is called ‘Arsa’ where the groom paid to marry a woman. The fourth type is called ‘prajapatya’ (female marriage to a man who promises purity and monogamy).

Two prevalent customs prevailed during the Vedic age. One was Kanyavivaha, in which the girl was married off as her parents had arranged. The second was known as ‘praudhavivaha’ where the girls were married after reaching puberty. The royal families practiced ‘Swayamvara,’ in which girls were free to choose their husband from a pool of eligible bachelors invited to their home.

It is important for everyone to understand that in the Sanatanaa Dharma, ladies have always had a special place. Unlike feminazis, liberals, and pseudo-intellectuals claiming that Hindus mistreat their women, the reality is that these claims have no merit. Whereas women are treated as second fiddle to men in other Abrahamic religions. As per Quran, Qur’an 4.34: “Men stand superior to women in that God hath preferred some of them over others, and in that they expend of their wealth; and the virtuous women, devoted, careful (in their husbands’) absence, as God has cared for them. But those whose perverseness ye fear, admonish them and remove them into bed-chambers and beat them; but if they submit to you, then do not seek a way against them; verily, God is high and great.”

But they are treated equally with men in Hinduism. It should be noted that during the Vedic period, ill-practices such as Sati did not exist. Sati, and many other such practices, crept into the social system following the Mughal tyrants’ invasion. Unfortunately, these Islamic fanatics’ kidnapped, raped, tortured, and used women as sex slaves at the time. Hence, to save females from such humiliation and torture, inhuman practices like female infanticide, female feticide and Sati, became common.

If one wants to see how progressive our Indian society was regarding females, one should visit the Halebidu temple. The murals on the temple’s outer structure depict various female figurines holding telescopes, wearing heels and modern dresses, etc. These are just a few examples, but it goes to bust the ‘false modernity of west’ claims of the western media and India haters. Females are still fighting for their rights, even after so many years of independence. Many freedom fighters and social activists worked tirelessly to assist them in achieving true independence. However, it should be noted that Sanatana Dharma has always been more progressive and tolerant than Abrahamic religions. This propagation of lies of women being relegated as second fiddle to men in Hinduism shall be curtailed and dispelled.