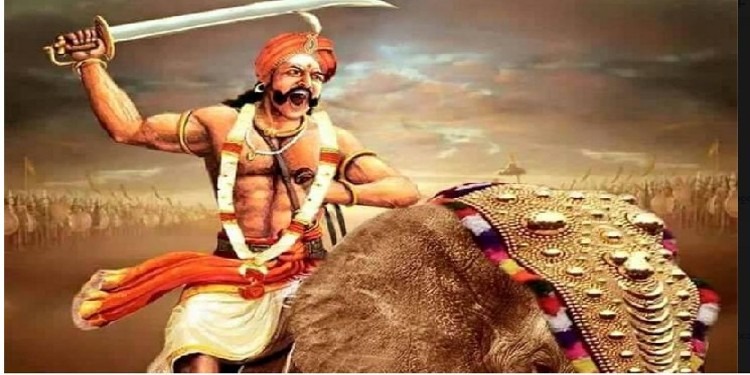 There have been innumerable stories of bravery and sacrifice overlooked in our history due to prejudice and unkindness. Our history had been whitewashed to highlight those whose contributions were negligible or minimal. Fighting for Independence wasn’t just about defeating the British, but also about combating internal enemies. Several unsung warriors fought continuously and struggled hard for this cause in order to achieve independence. One such noble and fearless warrior was Puli Thevar, who was a Tamil King in the 18th Century and fought against the EIC and the Nawab rule.

The earliest revolt against the British and the Nawabs took place under the tutelage and guidance of Puli Thevar, Nelkattanseval. This revolt took place before the revolt of 1857. Puli Thevar was born in 1715 into a noble family to Chitraputra Thevar. Their ancestors received the kingdom from the Pandya King at the start of the 14th century. Puli Thevar’s Palayam (mid-sized feudal kingdom) was one of the 18 Maravar Palayams that were divided under Nayak’s rule. Thevar Puli or Pooli Devar (Puli means Tiger in Tamil) was a Hindu Marava chieftain. He was a Lord Shiva bhakt, and ruled an area called Nel katum sevval or Avudayapuram, located in the Sankarankoil taluk of Tamil Nadu. A just ruler, he pursued equality for all and walked the path of dharma.

It was 1726 when Puli Thevar was crowned. A coalition of Britishers and Islamic Nawabs was formed in the 1730s by Britishers who wanted to expand their influence. The friction and conflicts began when they collaborated with each other and ventured into the south. Puli Thevar was a strong leader who refused to pay taxes & revolted, hence began two decades of bloody war. Puli Thevar forged alliances with other poligars with the aim of declaring independence in 1757.

Puli Thevar was undefeated in every battle against the Anglo-Nawab armies from 1750 to 1766, i.e., 16 years straight. It was unprecedented for an Indian ruler to stand up to the British as Puli Thevar did, especially since the British were allies with the Nawabs.

As a great warrior and tactician, Puli Thevar subdued Mudemiah, Mian & Nabi Khan, the three Pathan generals of the Nawab’s forces. Despite their efforts, the Anglo-Nawab front was unable to defeat him militarily. Therefore, in an effort to counter his growing power, they offered Puli Thevar large land grants if he joined forces with the Nawab against other Bharatiya rulers. However, Puli Thevar refused.

Puli Thevar was at odds with Mohammed Ali, the then Nawab of Arcot and a close ally of the British. Madurai and its southern parts were taken over by the British in 1736 after the Nayaks lost their power. Marudhanayagam, who was a Muslim convert named Muhammed Yusuf Khan (1725-1764), was one of his prominent opponents, and he later rebelled against the British. Yusuf Khan was a warrior for the Arcot troops and later served as Commandant for the British East India Company troops. He was used by both the Nawab’s forces and the British forces to suppress the uprising of the seventy-seven Palayakkarars. These events took place in the late 1750s and early 1760s, long before Kattabomman, another courageous patriot who fiercely revolted against the British, came into the picture.

French and Dutch colonists competed with the British for land at that time. Colonialists knew that Thevar could be an ally in their fight against the British. Despite having just lost his kingdom, Thevar didn’t ally with these forces that harbored ill intentions against Bharatvarsha.

Puli Devar was an exceptional warrior, a fierce fighter, tactical, diplomatic, and known for his impeccable war strategy. He was deliberately maligned and targeted by the British with labels such as ‘deceitful’ and ‘unreliable’. As a matter of fact, he didn’t support the sick and evil intentions of the British against his land. Rather in 1757, these Palayams declared independence and refused to pay land tax or Kisthi to the greedy Britishers.

Thevar remained invincible and defeated a battalion of British and Nawab soldiers on the banks of Thamirabarani. However, Yusuf Khan (Maruthanayagam) managed to suppress the revolt in 1761, but unfortunately, Puli Thevar got trapped by the Nawab and his agents so that the British could capture him. Thevar was arrested by the British and Nawab’s army, and he was subsequently taken to prison. During his journey to the prison, Thevar expressed a desire to worship the deity at Sankaran Kovil. He sang hymns at the temple to praise the deity.

Later, people heard the sounds of handcuffs being broken. They saw only broken chains and handcuffs when the troops rushed in and couldn’t spot Puli Thevar. He escaped without leaving any physical evidence or clues whatsoever and they were left dumbfounded. There is another theory that the British executed him secretly, but kept the news from reaching the public, out of fear of enraging the entire region. At the Sankaran temple, the room where he disappeared still holds reverence. This made the invincible hero an immortal hero, who remained invincible throughout Tamil Nadu’s history and India’s as a whole.

Many people made the penultimate sacrifice and posed a real threat to the British. We still enjoy living freely and independently because of people like Thevar, whose immeasurable contributions to their motherland shall never be unnoticed.