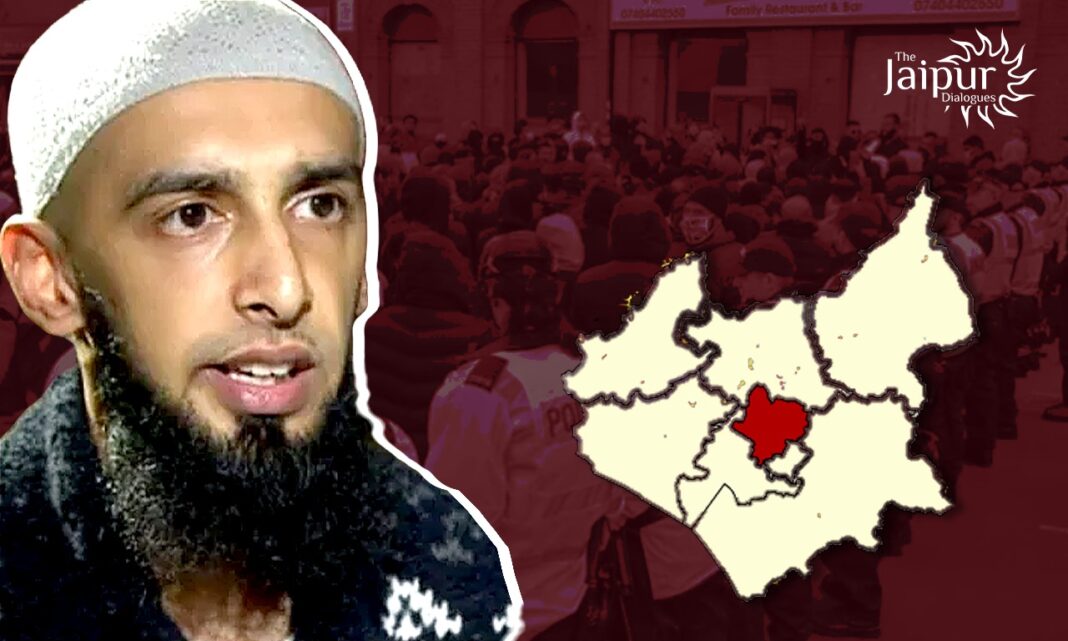 Hindu Semitism is nothing new, and hate against Hindus continues to grow in India and throughout the world. In connivance with each other, the Abrahamic faiths have taken it upon themselves to hurt, trivialize, and damage Hindus. There was no obliviousness to this current situation; it was foreseeable and predictable. For years, Hindus turned a blind eye to the attacks on them because they loved to demonstrate their secular credentials. There is a crisis facing Hinduism today, and controlling the Jihadi and Christian mafias will be challenging.

Recent attacks on Hindus in Leicester by a violent rampaging Islamists mob demonstrate their anti-Hindu mentality. Muslims hate Hindus, not just because they consider them to be ‘Kafirs’ or infidels, but because their religious diktats allow this. A recent cricket match between India and Pakistan sparked an outburst of insanity in Pakistan. Pakistanis are known for their fanaticism, and this match was just a trigger for their madness and hatred. Pakistani Islamists don’t operate on rationality but extremism.

It was Islamists, armed with knives and weapons, picking on innocent Hindu households that escalated the simple typical 'cricket spat' into a full blown crisis in #Leicester

There has been a spike in anti-Hindu vitriol in Leicester. During a normal banter between Indian and Pakistani supporters, one Pakistani snatched and deliberately disrespected the Indian flag, according to a Hindu organization (@INSIGHTUK2).

28th Aug: After a #INDvsPAK2022 cricket match rival fans bantered. Such banter is commonly seen amongst boisterous football fans too, it was non-religious & became serious only when an individual supporting the #Pakistan cricket team snatched and disrespected the #India flag. pic.twitter.com/GsVWalGoVb

Leicester Police took note of the incident. But Chief Inspector Paul Allen falsely implied that the Hindu diaspora fuelled this attack in a letter dated 31st August. All of this just shows the deep hatred buried in the hearts of these Abrahamics, regardless of their nationality. The Pakistani Jihadis were able to unleash their barbarism unhindered as a result of Paul’s irresponsible and unwarranted indirect accusations.

We know there are concerns in the community and we are working to identify those responsible for the disorder and racist remarks after the cricket match on Sunday evening – a statement from the force: pic.twitter.com/nLAaaqV1gP

Despite issuing a clarification the following day, the damage had already been done. There was enough tension in the area as a result of the free hand given to Pakistani extremists and Jihadis.

Hindus of #Leicester suffered immensely due to this grave mistake.

We expect you will do justice to the #Hindu victims by charging the culprits.

Your strict actions can only bring peace & security in the future. pic.twitter.com/PQj03UjPcT

Muslims are brutally attacking Hindus, carrying out murderous assaults, and hindering festive celebrations. Planned and vicious attacks like these seem like a part of a premeditated agenda, one based on Muslim victimhood. The Islamists also attempted to falsely attack the Hindu community, by inserting a communal angle.

The Hindus were alleged to have raised anti-Islamic slogans when in reality they chanted ‘Jai Shri Ram’ and ‘Vande Mataram.’

The sole prerogative of Muslims has been to spread hate and fear through misinformation. In every instance, they misappropriate information, create falsehood, and use one of their favorite tools, blasphemy. A Leicester-based Muslim “activist” with problematic and extremist Islamic views, Majid Freeman, is one such rabid, anti-Hindu radical. In addition to spreading fake news, Majid has perpetrated violence against Hindus. Dog whistling by so-called Muslim activists is a global phenomenon. These activists incite riots by playing the victim card.

It wasn’t too long ago ripped up Quran pages were found on the streets not far from this same road. I hope the people responsible are caught asap before things really escalate. #Leicester

Hindus have lived under constant threat, trauma, and vilification for a long time, and no one can dispute that. There was a recent incident in which a Mandir in Leicester was vandalized by the Muslim mob. They tore down the Bhagwa Dhvaj, showing the tacit support they have from the local authorities.

The ploy of depicting the old hero ‘Bechara Helping Muslim’ has been repeated over and over again. Despite all odds, he stands up for Hindus. There is nothing more ironic and hypocritical than this. Aina J. Khan from the leftist media outlet The Guardians shared a news story about a good imam. This ‘Hindu-Muslim Bhai Bhai’ ruse has been invoked time and again to portray Muslims as peace-loving. No one can deny that this is a far cry from the truth. 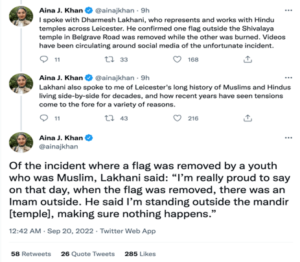 In addition to this entire fiasco, the Muslims have initiated yet another clever drama. To destroy the ‘RSS Hindu extremists’, they have called on Muslims and Sikhs to unite against Hindus. One can smell the hand of premeditated violence and separatists working together to destroy Hindus and Hinduism.

The police did not put this guy in the clink. They must want a race war in Leicester. They knew and did not stop them. Good luck Hindus. Your leadership is not working. pic.twitter.com/1ntFmsI6f6

Indian government officials have condemned the violence through the High Commission. Despite raising the issue, the weak and inept British government and administration have failed to rein in the Jihadi fanatics.

The way these anti-Hindu Indian media outlets have come out in shadow support of violent Muslims isn’t surprising. Publications like The Wire and journalists like Kallol Bhattacharya have described this violence as a scuffle or minimized the role of the perverted Islamists. Whereas, international media outlets, including The Telegraph, Middle East Eye, etc., have portrayed Muslims as victims.

Whether it’s happening in the USA or other countries, such international attacks on Hindus aren’t a one-off incident. The entire Islamic – Christian mafia is hellbent on erasing Hindu identity. However, they should realize that Hindus are not a weak force and that times are changing, albeit slowly. The global treatment of Hindus as pariahs has to and shall change because the irrational dominance and hatred perpetrated by Jihadis isn’t a threat to Hindus alone. The world must wake up to this hate-fueled religious bias. And Hindus should throw away the veil of secularism immediately if they wish to live in peace.