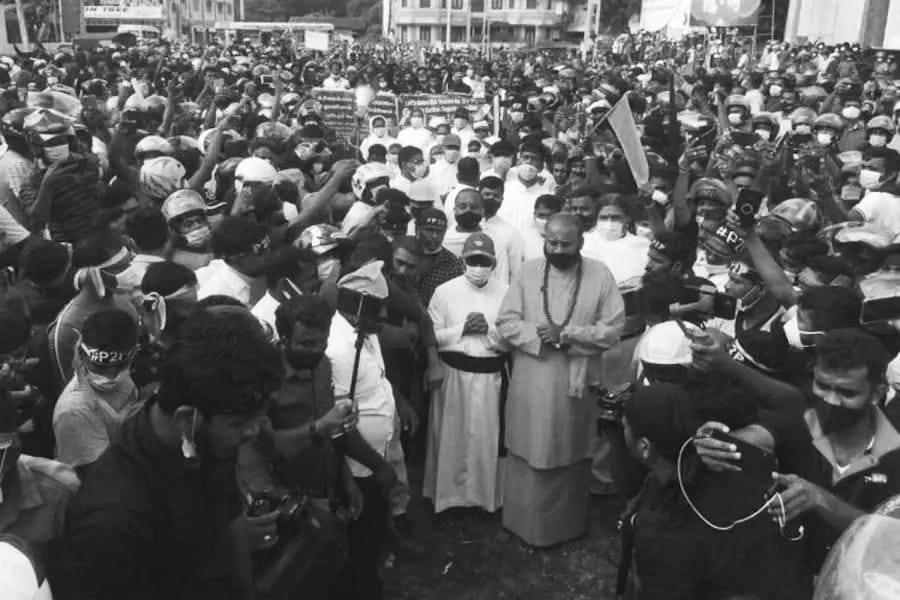 As the “sole representative of the Tamil people”, [1]Tamil National Alliance openly declared LTTE as the sole representative of the TamilsLTTE, Liberation Tigers of Tamil Elam, a terrorist group which aimed for a separate territory for the Tamils of Sri Lanka, also involving Indian Tamils. However, this whole game plan of creating a separate abode for Tamils executed in Sri Lanka, the ultimate aim was to balkanize Indian Tamils, to break away the grand state of Tamil Nadu from Bharat while spreading terrorism.

Separatism and disintegration of India is a common agenda of many world powers, and what mechanisms they use to execute these game plans is a thing to see.

Abrahamic religion and their never-ending lust to perforate every inch and corner of the world with their atrocious ideology, is always played on. And the ploy of Tamil separatism was put by the Church itself, and the Vatican fed NGOs which work as the aids to humanity, become the harbinger of the Christian ideas in the interiors. Most LTTE leaders used to hide their Christian identity, and like a best kept secret it never made the headlines of the big newspapers.

The National Christian Council of Sri Lanka (NCCSL) and its affiliate groups had been working to balkanize Sri Lanka.

This can be proved by the World Council of Churches promoting the concept of traditional homeland theory in 1994 at UNHRC (United Nations Human Rights Commission) in Geneva.

NCCSL never refer LTTE as a terrorist outfit and helped in establishing narratives like, “Tamil Homeland”, “ethnic war”, “Sinhalese Buddhist chauvinism”, “genocide of Tamils” etc.  The Church tried to push the idea of ‘self-determination’ as the idea of creating a new nation state which is sponsored by Church. They tried to escalate the ethnic conflict between Sinhalese Buddhists and the Tamils.

During the Presidential elections of 1999 the Catholic Archbishop of Jaffna requested all Tamil parties to stop opposing LTTE and recognize LTTE as a sole representative of the Tamil people. In an article in the Asia week (21 November 1997) the Archbishop of Jaffna confirmed the position and offered blessings for the so-called freedom struggle.

LTTE Voice of Tigers tied up with Radio Veritas, a Catholic broadcasting station run by the Asian Catholic Bishops Conference based in The Philippines. The Tamil Service of the Radio Veritas is run by the Tamil Catholics of Tamil Nadu. Voice of Tigers had a “coordinating office” inside St. Sebastian’s Church in Mallavi, Wanni; the office was opened by the pro-LTTE Bishop of Mannar Fr. Rayappu Joseph.

Catholic priest Fr. Paththinathan collaborated with Prabhakaran and LTTE to kidnap children and turned them into child soldiers. 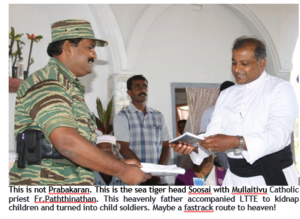 During the terror era of LTTE, Prabhakaran, and its supreme commander killed the entire moderate Tamil Hindus thinkers, leaders, politicians and academics. A great rift was created between Buddhists and Hindus in Sri Lanka. There are many instances of genocide and killings which were done to terrorize the impoverished Tamil Hindus.

A unique ploy devised by LTTE to expand their influence was to create a secular character while employing Christian –Hindu religious symbols to give a façade of their separatist agendas. The martial culture developed by LTTE took form of a quasi-religious propaganda, where they used a personal crucifix or a holy picture within the military camps but never encouraged the institutionalized religious practices. They profusely used Christian and Hindu references and ritual language to show the greatness of the martyrdom for the cause of building a Tamil country.

Targeting India and especially Tamil Nadu for their separatist agenda is very clear with the rampant Christian evangelicals converting Hindus in the state. Media, schools, hospitals and NGOs are all funded and aided by Church societies and promise for a bright future, while coaxing the people into the Christian fold. In 2004, due to the influence of Church, Tamil Nadu Chief Minister had to repeal the Anti-Conversion Law implemented by Jayalalitha herself.

There is a little doubt that the strategy of Church is to turn Tamil Nadu into a Christian State and they have adopted every means to do so. While the LTTE has been eliminated from the Sri Lankan scenario, the project of Christianizing and destabilizing is not coming to an end. The grave atrocities incurred upon the innocent people by LTTE is all in all the agenda of Christianity. The ethnic cleansing has always been the means of the Abrahamic religions to supersede the local cultures and they have been more than successful in that.