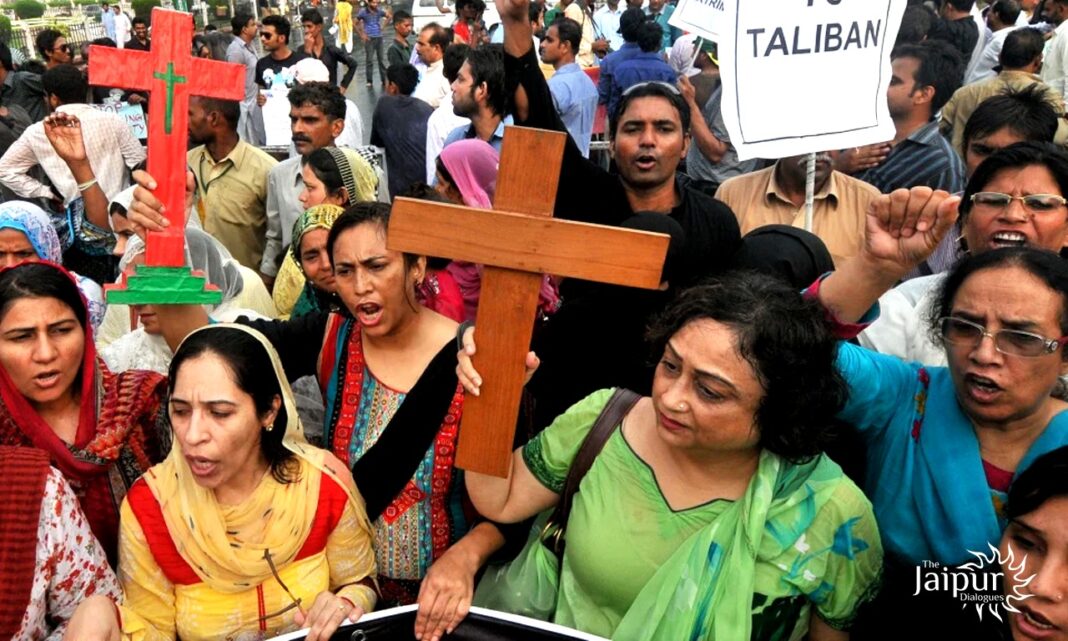 The spread of Christianity around the world has been based on deception, coercion, and lies. Within Christianity, anything rational or true was and is discouraged. Deceptions like these aren’t novel, but they’ve been going on for centuries. This still happens today. In India, Christians are using a sly tactic to fool and ridicule Hindus.

Hindu religious symbols and deities have been cleverly misused by Christian missionaries in India to further propagate their agenda. Hindus’ emotions and innocence are being exploited by Christians today. Symbolism in Christianity is audaciously copied from pagan communities, which they have wiped out. Christians used false propaganda when they were unable to spread Christianity through violence, like Islam.

In an attempt to cheat people, the Vatican adopted pagan symbols as a means of cheating them.

This is basically what Christian missionaries have been doing for centuries, whether in Europe or Asia. Most people who know Mithraism know it was a Roman mystery religion centered on Mithras. Pre-Zoroastrian Iranians worshipped Mithra as the god of the sun, justice, contract, and war. Mithra’s characteristics and rituals are heavily incorporated into Christian rituals. The attributes of Jesus are modeled to a considerable extent on Mithra, including the birthdate. People aware of Isis/Horus[1], Cybele/Attis[2], and Juno/Mars, would be able to draw glaring similarities between their traditions and the story of the Virgin Mary and Jesus’s birth.

Robert de Nobili, a French Jesuit who came to India in the 17th century, started new deceptive practices. Abrahamics, particularly Christians, who target Hindus against Casteism have started adopting the same approach. The concept of ‘Christian Brahmins’ has been introduced recently… a ludicrous and unbelievable idea from the beginning. These attempts to fool Hindus involve depicting ‘Fathers’ as Brahmins or wearing saffron robes.

Various other forms of how Christians are fooling Hindus are:

Hindu culture has been continuously weakened by missionary activities in South India. As one listens to Yeshu Sahastranaam and Yeshu Surya Namaskar, one becomes bewildered and anxious about the deep roots the missionaries manage to establish. They have mimicked our festive processions, whether they are distributing Prasad or leading festive processions. Hindu temple designs were copied by churches in southern India when it came to architectural design. Sri. Sita Ram Goel has written extensively on how Christians copy Hindu Ashrama and Sanyasa traditions. It is impossible to know how deeply and cunningly these Christian missionaries have studied and copied our culture. In South India, it’s not uncommon to see Hindu temple-style Dhvaja stambha (flagpost) and lamps on churches.

Christianizing Hindu practices is the goal of these modern appropriations. Christians are deceiving secular Hindus who are blissfully unaware of their own ancient Hindu traditions and are not well-read about them. All of this is done with the malicious intention of confusing them and/or converting them to Christianity. These misappropriations are caused by Christians’ inferiority complex towards age-old progressive and scientific Hindu traditions.

The deliberate ignorance of Hindus leads to their bullying, mistreatment, and harassment on their land. Missionaries have such a free hand not only because of administrative oversight but also because Hindus are removed from their roots. Hindus have never been conscious of their vast origins, and the tranquility of Sanatan Dharma, but have always sought external validation. Abrahamic faiths have exploited this weakness and lack of knowledge, well. Hindus have become gullible because they wish to remain so and have fallen prey to the tactics of these Abrahamics. Unsurprisingly, the liberals who have perennially ridiculed Hindus unjustly for misappropriating facts, have now fallen silent. Hindus need to realize that their silence, love for secularism, and deliberate ignorance of evil, will one day affect them. As a result, not only will this affect them but also their upcoming generations’ future existence.