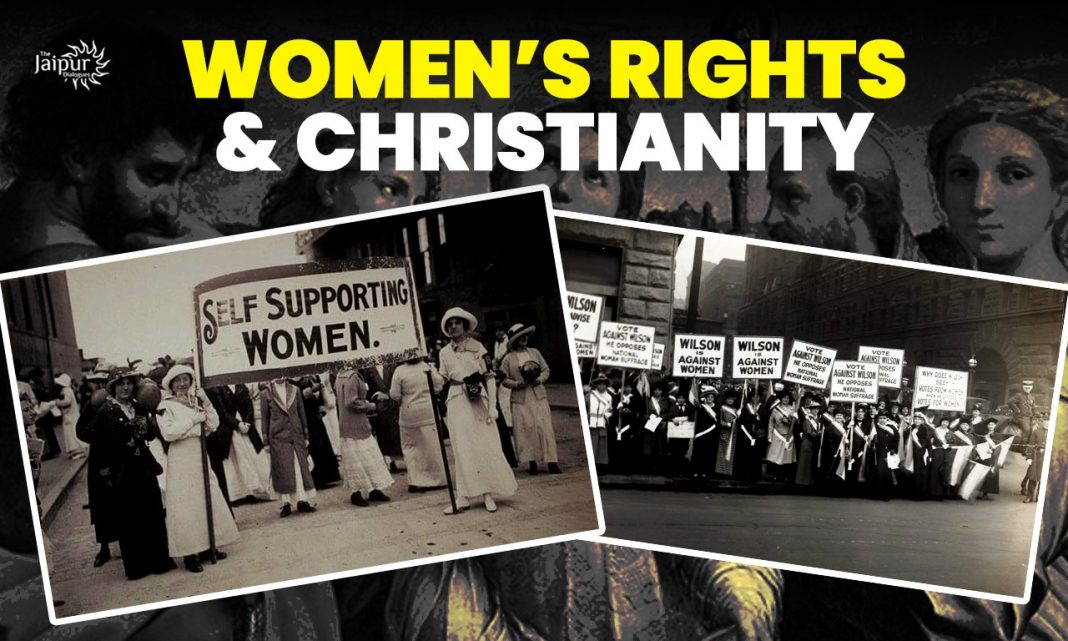 Women’s rights have been conveniently overlooked in many Christian dominant nations. Though, the garb of freedom and equality is maintained, somewhere this continuous onslaught on the womenfolk is a recurring phenomenon. This needs to be corrected soon.

“Let a woman learn in silence with all submissiveness I permit no woman to teach or have authority over a man; rather, she is to remain silent.” 1 Timothy 2: 11-12

Although selective Hindu bashing isn’t a recent trend, it’s always better for society to highlight its ills. Sadly, the Indian society has been rife with domestic abuse for a long time, and change is necessary. We cannot wash away the sins of the past, however. The issues faced by women in Christianity and Islam need to be addressed at the same time. Women are vastly undervalued in Abrahamic religions, whereas in Sanatan, women are equally valued to men.

Despite the image of a Christian society that is free, equal, and inclusive, the reality is very different. Although North America is viewed as a place where women have equal rights and status, violence against women is still rampant. Forty to 51% of women experience some type of violence in their lifetime including child abuse, physical violence, rape, and domestic violence.

In the Bible, there are several references to the pitiful condition of women and their deserved treatment. It was acceptable for horrific crimes like rape to be tolerated.

There are a couple of references in the bible, that highlight these references, for instance in Jacob Meets Esau (Genesis 33, NIV). The mention of the story of the unnamed woman in Judges 19–20 is one of the most disturbing texts in the Hebrew Bible. Rising from Jephthah’s daughter (Judges 11) originates the Israelite tradition that each year the young women of Israel go out for four days to commemorate the daughter of Jephthah the Gileadite. There is another reference in the Bible Daniel 13 RSVCE; KJV – Susanna’s Beauty Attracts Two Elders. There are a couple of misogynist mentions in the Bible, for instance, A woman should learn in quietness and full submission. I do not permit a woman to teach or to assume authority over a man;[b] she must be quiet. For Adam was formed first, then Eve. And Adam was not the one deceived; it was the woman who was deceived and became a sinner. (1 Timothy 2:11–14)

Role of the Church

Although a lot of these references don’t apply today. The idea that the Western world is free and open to women isn’t entirely true. The global media presents India as anti-female, with a convoluted idea of what feminism is. Churches have contributed substantially to imposing these gender-based stereotypes, which’ve been conveniently overlooked. In spite of the many claims made about gender equality in western nations, there is still an understated male dominance. The subordination of women has been subtly promoted. For instance, In the “Rules of Marriage” compiled by Friar Cherubino in the 15th century (Bussert, 1986) we find the careful instruction to a husband to first reprimand his wife; “And if this still doesn’t work . . . take up a stick and beat her soundly . . . for it is better to punish the body and correct the soul than to damage the soul and spare the body” (p. 13). Unfortunately, this doctrine has been viewed as consistent with scriptural passages interpreted to confirm male dominance over women: “Wives be subject to your husbands as you are to the Lord. For the husband is the head of the wife just as Christ is the head of the church, the body of which he is the Savior. Just as the church is subject to Christ, so also wives ought to be, in everything, to their husbands” (Ephesians 5.22-24 NRSV)

Some Facts and Figures

In some cases, the Church, which is an instrumental part of a Christian’s life, has promoted an anti-female perspective. The women have been told that they must be ‘better wives’ and should put up with men’s abuse. As a norm, wives were subject to physical and mental abuse. References to accepting domestic violence can be found in the Bible. For instance, in Ephesians 5:20; prohibition of divorce, e.g. Malachi 2:13-16).

As well as physically and mentally destroying the victim, domestic violence damages her inner self as well. Because of socio-religious constructs, such assaults severely damage the victim’s self-esteem. A few references in the Christian texts highlight justice for victims and sufferers. For instance, Isaiah 58:6-7; Christian Scripture, Luke 17:1-2. In many western nations, the Church clergy is not supportive of these incidents. Instead, they seek to suppress them. They do so out of concern for their carefully cultivated reputation. In Australia (ABC Media), a media outlet ran a report on the role of the Church and subsequent domestic abuse. The synopsis of the report stated the following; “Research shows that the men most likely to abuse their wives are evangelical Christians who attend church sporadically*. Church leaders in Australia say they abhor the abuse of any kind. But advocates say the church is not just failing to sufficiently address domestic violence, it is both enabling and concealing it.”

When it comes to lecturing others, the western and developed world are always on the front line. They do so even when their own house is in disarray. Are women’s rights irrelevant to them? Many times, women don’t report harassment to maintain a false façade, so that they do not appear weak to others.

It is widely accepted by abuse experts (and validated by numerous studies) that evangelical men who sporadically attend church are more likely than men of any other religious group (and more likely than secular men) to assault their wives.”

Defining and addressing domestic abuse isn’t a joke, and we need a major course correction worldwide. It is pitiful to see women suffering after so many years of struggle and awareness. It is unfavorable and bad for any society to hide abuses using the veil of religious orthodoxy. Egalitarian principles are applicable to all women, regardless of their ethnicity or nationality. It is prudent to rectify any religious beliefs or systems that encourage such practices as soon as possible without any ill intention of superiority. The other half of humanity deserves to be given their due. Hence, when the majority of the population practices Christianity, reforms have to and should be adopted, especially related to women.