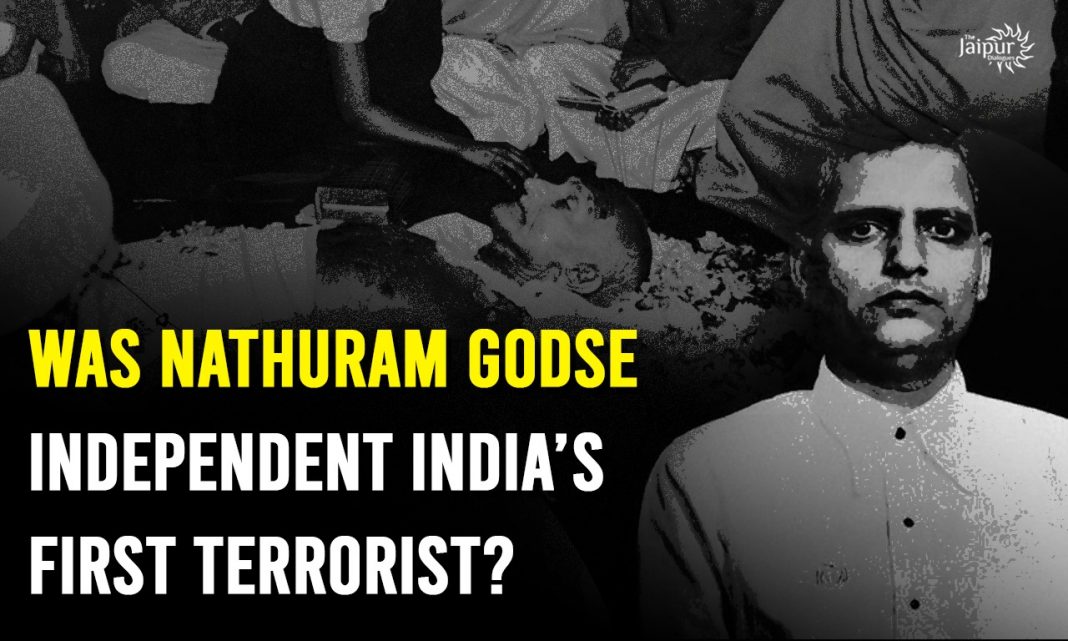 An ideologically convenient lie that overlooks terrorism of the Kashmir invaders and Razakars in Hyderabad State, both of which preceded Gandhi’s assassination by Godse

A statement on Nathuram Godse has become lately popular – Godse was the first terrorist of independent India. Using Godse to beat Hindus is an old ‘secular’ trick, but this particular allegation is new. The allegation is traceable to a speech given by Kaamal Haasan during the 2019 general election, where he said India’s first terrorist was a Hindu, referring to Godse. It is possible I have missed an earlier origin.

There is no doubt Godse was Hindu. For the moment, we will not inquire into whether Godse was a terrorist or not, but proceed from the hypothesis that he was one. The question we will take up is: was Godse the first terrorist of independent India?

India became independent on 15 August 1947. On 22 October 1947, two months and a week after independence, Pakistani lashkars invaded Kashmir under the guidance of Pakistan’s army. They rampaged over a largely unguarded population. If terrorism can be defined as ‘unlawful use of force and intimidation against a targeted population to achieve political ends’, the lashkars’ actions certainly fulfilled the criteria. They indulged in murder, loot, arson, kidnap and rape of the civilian population with a definite political aim in mind.

During the same period, the armed wing of pre-partition Majlis-e-Ittahadul Muslimeen, popularly known as Razakars, was terrorising Hyderabad State’s civilian population to resist integration into India. The Razakars’ actions also fulfil the criteria of terrorism. We will quote just one eye witness account here to make our case, though the evidence for terrorism is abundant. On 2 September 1947, two weeks after independence, Razakars and police opened fire and killed 22 people in Warangal district because they had defied the Nizam’s order not to hoist the national flag. Though Jalianwala Bagh is remembered as state-sponsored terrorism, this event has been forgotten.

Godse shot Gandhi on 30 January 1948. An earlier aborted attempt was made by Godse and accomplices on 20 January 1948. The aborted and successful attempts to kill Gandhi came a full three months after the lashkar invasion of Kashmir and close to five months after flag-hoisters were shot and killed by Razakars. From the first day of independence to the 17 September 1948 when Hyderabad state acceded to India, Razakars’ terrorism continued unabated.

The allegation is an ideologically convenient lie with no basis in reality. Why has the lie been manufactured? The stark reality of Islamic terrorism leaves no ambiguity that can be harnessed to shield Islam from scrutiny. Previously reliable statements like ‘terrorism has no religion’ and ‘no true religion can support terrorism’ have lost credibility. The new game is to blame others for things Islam does to level the playing field, exemplified in the ‘secularist’ invention of “saffron terrorism”. Declaring Godse as the first terrorist serves a novel chronological purpose. The original sin of terrorism is ascribed to a Hindu, implying that all subsequent Islamic acts of terrorism are reactions provoked by Hindu terrorism. In the aggressor-victim calculus, this chronological element is extremely important for the continuation of the Muslim victimhood narrative on which Indian ‘secularism’ is founded.

Having established the chronological falsehood of holding Godse as independent India’s first terrorist, let us cast a brief glance on whether Godse was a terrorist. The definition of terrorism given above is ‘unlawful use of force and intimidation against a targeted population to achieve political ends’. A terrorist therefore is a person who undertakes actions motivated by the desire to terrorise and intimidate. Godse’s testimony primarily cited Gandhi’s betrayal of Hindus as the chief cause of anger against the Mahatma. His eventual resolve to assassinate Gandhi was occasioned by the fear that if Gandhi continued to live and lead, Hindus would be compelled to compromise further and accept increasingly unfavourable deals. His most pressing fear was Gandhi could hinder military operations against the Nizam state of Hyderabad, then engaged in terrorism against its subject population to preserve independence from India.

According to Godse and accomplices, these circumstances were avoidable if Gandhi ceased to exist. His assassination was undertaken with the motive of killing one man, albeit an extra-ordinary Mahatma; it was motivated by the desire to remove one thorn. A case for terrorism could have been made if ‘Godseites’ went on a spree against Gandhians, fulfilling the criteria of targeting a population, but nothing of the sort happened. Thus, without concluding definitively, the case can at least be made for questioning and re-assessing the grounds on which Godse has been branded a terrorist.

‘Secularists’ use Godse as a weapon to brand the large and diverse Hindu movement as a violent terrorist-worshipping movement. The taboo imposed by ‘secularists’ demands unqualified acceptance of Godse’s evil status and active participation in propagating it. Starkly reminiscent of Orwellian ‘2-minutes hate’, the slightest divergence provokes a cacophony of charges of Godse-love and Godse-worship. As a result, Godse has been treated as an untouchable in sober and impartial scholarship. This ideological blackmail is wholly unjustified and must be rejected, for it is possible to assess a man’s actions and motives without raising him to hero status.