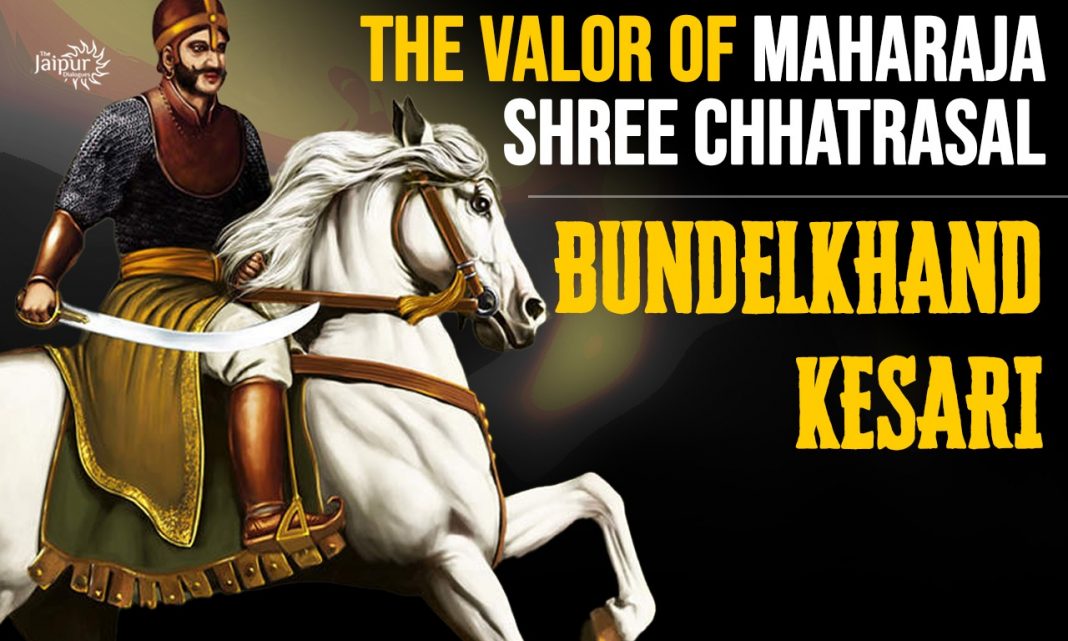 The valor of illustrious warrior kings like Maharaj Chhatrasal is the reason why Hindus are still existing in their homeland. Their identity is in crisis today, all because of their secularism. It’s time we pay heed to the heroic history of our ancestors.

The savior kings of Hinduism played a major role in Indian shaping history. Sadly, their valor and bravery have not been given the proper recognition in the modern age, as they rightfully deserve. Bharat remains a land of Hindus because of these great warriors. Megalomaniacs and fanatics like Aurangzeb would have succeeded in their perverse agenda if it were not for their brave hearts.

On 4th May 1649, Champat Rai and Lal Kunwar gave birth to Bundelkhand Kesari Maharaja Chhatrasal. As a Bundeli warrior, he took up arms against Aurangzeb and fought against the tyrant ruler. It was his ambition to establish his own kingdom in Bundelkhand. His father raised the banner for freedom but was unfortunately killed in battle with the Mughals. However, his efforts were not in vain, since he was able to kill the notorious Abu Fazl. A mere 22 years old, Chatrasal raised an army of 5 horsemen and 25 swordsmen in 1671. He defeated many noted Mughal generals including Rohilla Khan, Kaliq, Munawwar Khan, Sadruddin, Sheikh Anwar, Sayyid Latif, Bahlol Khan, and Abdus Ahmed.

A large area was conquered by him, from Chitrakoot and Panna on the east to Gwalior on the west. Within ten years of taking the reins, he was able to accomplish all of this. Shri Pran Nathji was Chantrasal’s guru, and the latter embraced Pranami Dharma. Chhatrasal made Panna the capital of his kingdom following the advice of his Guru.

During the Mughal Empire, the Hindus were subjected to what was called the Jizyah tax. The Bundelis responded to this tax with a brave backlash. This kind of courage is, unfortunately, lacking among Hindus today. The brutality of the Islamist fanatics would be curbed if we became like our ancestors. The heads of Maulvis who collected Jizyah in Orchha, the capital of Bundelkhand, were severed. Not only that, but they also stuffed Quranic pages into those heads and sent them back to the ruler. This was an open demonstration of the Bundelas’ disdain for the Mughals’ fanaticism. The fanatic ruler led an army against the Hindus in Bundelkhand in 1684 but was forced to retreat without achieving his goal. They caused destruction and trails of horror and destruction, but they were unable to subdue Chhatrasal and the Bundelas.

There followed a deadly struggle lasting nearly half a century. A wave of Mughal and Pathan attacks followed, but they were always repulsed. With each successive attack, the barbaric Muslims desecrated Hindu temples and assaulted Hindus. Civilians were killed cold-bloodedly, women were raped, and children and women were captured and made slaves. These experiences only made the Bundela even more determined to fight for freedom.

During the 15th century, the Marathas attacked and shook the Mughal empire. Following Aurangzeb’s death, the Bundelas began to trample on their Muslim adversaries. The finest of the Mughal generals were sent to subdue the Bundelas, but they all ended up failing. Earlier, Maharaja was recruited into Aurangzeb’s army to support his Deccan campaigns. But he was unwilling to serve the Mughals, who brought chaos and misery to Bundelkhand. Due to his father’s constant struggle against the Mughals, he was inspired to fight for the Bundelkhand cause.

Noted historian Jadunath Sarkar wrote in his book ‘Shivaji and his times’ that Maharaja Chhatrasal who fought from the Mughal camp subsequently tricked them. Chhatrasal fooled them with the ruse of hunting and reached the capital of the Marathas to serve Raje.

Shivaji Maharaj advised Chhatrasal to wage a revolt in his kingdom to distract the Mughals. Nevertheless, it was difficult, because Aurangzeb was trying to crush every revolt. It was worrisome to learn that several Hindu kings had indeed submitted to Aurangzeb.

Mahoba was captured by Maharaja Chhatrasal in 1680 following a successful campaign. Mastani was Chhatrasal’s daughter from a marriage to a Shi’a Muslim woman. Mastani was married to Peshwa Baji Rao I since Maharaja was very close to him and treated him like his son. Upon Maharaja’s death on the 20th of December 1731, Peshwa Baji Rao I was given the reins of Mahoba and the surrounding region in recognition of his exemplary valor.

Attempts were made by the Mughals to capture Bundelkhand. It was the Pathan warrior Muhammad Khan Bangash who led his fighters into a final confrontation in 1730. In a battle with the Pathans, Maharaj Chhatrasal fought with his sons and warriors. Their final victory over the Mughals in 1730 was made possible with the help of Peshwa Baji Rao.

Chhatrasal waged continuous warfare against the Mughals in Bundelkhand. His bravery and wisdom earned him great respect. His sense of honor, his undying love for his motherland, and his indomitable spirit made him one of the greatest leaders ever. Bundelkhand was kept away from the Mughals because of his persevering resistance and sacrifice. Despite raging Mughal barbarian forces, Maharaja Chhatrasal’s accomplishments centuries ago can be an inspiration to Hindus today. Hindus should realize that the freedom they enjoy today is the result of our ancestors’ relentless struggle. The Hindu community has, unfortunately, failed to rise above the lens of secularism and grasp what is actually happening. Despite imminent doom at their doorstep, they haven’t yet awoken from their deep sleep.

The leftist historians have distorted the heroic history of the Hindu kings and warriors. When times like this strike, we need to look back at history and appreciate our kings’ indomitable spirits’. In the past, our ancestors fought with tyrannical Mughals but did not lose hope as they faced the tyrants. Rather than becoming meek, Hindus must fight back against the forces that oppose them.