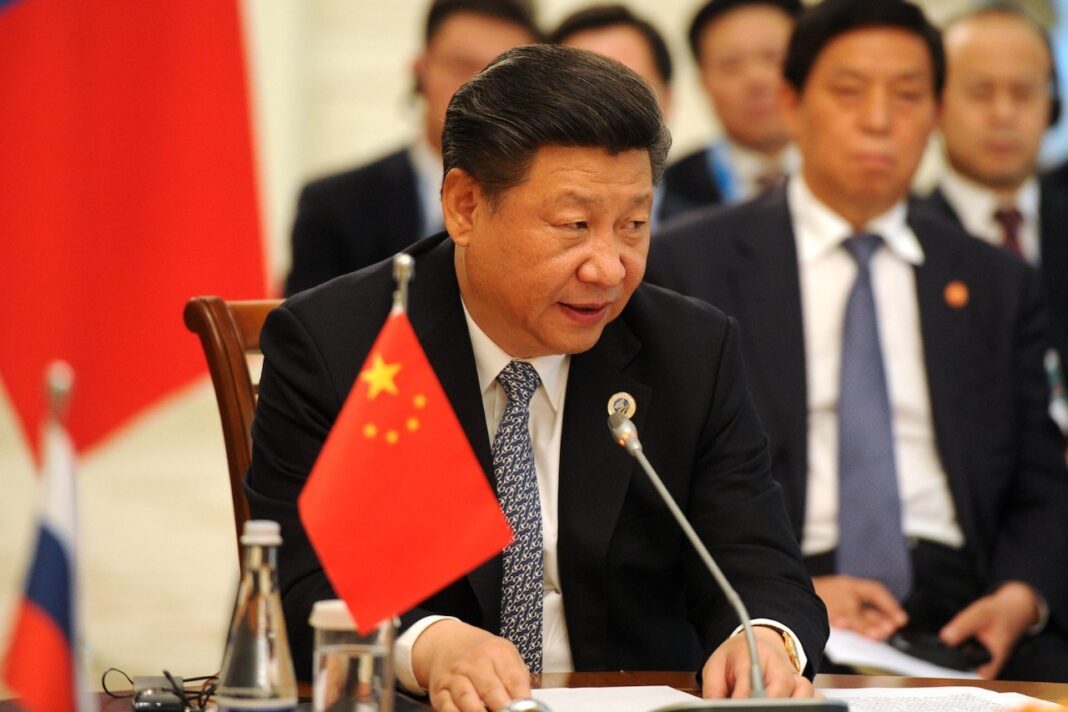 China is not the middle kingdom

It is the middle-aged kingdom

Why is China doing what it is doing? Two recent articles highlight the dichotomy of the situation. The article ‘China Talks of US Decoupling and a Divided World’ highlights the views of Zhou Li, a high ranker in CCP. He cautions China to prepare for – shrinking external demand, disruption of supply chains, coexistence with coronavirus over the long term, an outbreak of a global food crisis(in China?) and a resurgence of international terrorism (Tibetan and Uighur?). The Chinese economy is painted grim due to reduced exports, stalled production, blocked international logistics, raw materials lacking, and low productivity. Stable growth and job security are under high pressure. The other article talks of China’s Unconventional Levers of Power in World Affairs . The unconventional levers include building and exploitation of economic dependence, unfair practices, influence operations, capture of the elite, coercion through minimal force application but maximum reprisal promise, capture of international communication enterprises and creeping territorial expansion. 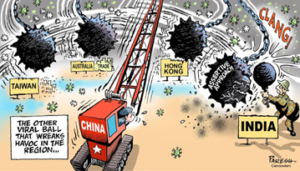 Things do not add up. A wannabe superpower with a grim economic outlook does not go around antagonizing its neighbors without a reason. We need to look elsewhere.

Standout Issues. Chinese sense of superiority is historical. It spurs the national ambition of attaining Superpower status. Deng set that to happen in 2050. The current cycle has seen extraordinary expansion of Chinese economic, military, and political power. The ‘China Dream’ of being a superpower was preponed to be achieved by 2030. Prima facie it seems over ambitious. Till one sees the demographics.  Also, the popular thinking that China has long term strategic view of things is a myth not borne by its history. The past century has been cycles of self-humiliation, internal strife, and revisionism where the state has promised prosperity and nationalism for surrender of personal liberties.

China’s large population, is aging fastest due to falling birth rates and rising life expectancy (see graph). Chinese birth rates are the lowest for 70 years despite easing the one-child policy. China has approximately 24 million marriageable males without brides. It explains bride trafficking from Pakistan! Its population is predicted to peak at 1.4 bn. Working hands and taxpayers are decreasing.  Overall dependency is increasing (see graph). A smaller working-age population must support a bigger, retired population. Social security net is minimal in China. Every working Chinese must support two parents and four grandparents. Commonly known as the 4-2-1 phenomenon. China’s economic growth was based on labor-intensive manufacturing . The drop in labor force, increases labor costs, makes goods less competitive. The Middle-Aged Kingdom will get old before it gets rich. Beyond 2030, China’s economic growth faces a cap, when the overall dependency ratio starts spiking. If China must be a superpower, it must get rich before it becomes old and decline sets in. It is a race against time to 2030.

The ‘get rich before old scheme’ has four drivers. One. Productivity-enhancing reforms to snare the rich and lazy as well as the poor and unable.  Create inalienable dependence througha data driven manufacturing web. Two. The BRI and CPEC; which debt trap poorer countries.  A slumlord mentality to garner money and power at the bottom of the heap. Three. The ‘Made in China 2025 Plan’, which envisages transformation of a low end ‘Made in China’ label to the high end ‘Create in China’ symbol. Ten core areas were targeted for technological ascendancy and high value returns. Huawei was part of this drive. Four. Build a world class military to protect its interests and sort out rivals. The first driver is the basic one. The others rest on that. Incidentally the only two big economies with better demographics are USA and India. They are China’s chief threats! Logical so far? 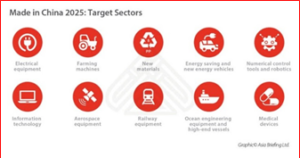 Everything was going great. Purring smoothly on track barring the small blip of a ‘Trade War’. Till the Wuhan Virus hit everyone for a six.

China realized the lethality of Wuhan Virus by mid-January.  China was being setback irretrievably. On 25th Jan they curtailed internal travel. Something was planned when Xi Jinping was out of public view for about ten days. They ensured International travel continued to carry the Virus out; to flatten the field.

When global supply chains were disrupted, everyone realized that China had surreptitiously created dangerous dependencies. Clamor for decoupling commenced.  As the virus spread, the BRI came to a grinding halt. ‘Made in China 2025’ was endangered by an anti-Huawei campaign. Plan Superpower was being broadsided by the Virus.

By third week of Apr there were calls for hard decoupling. India and ASEAN were at the forefront to reap the relocation dividend. How to save a falling economy?  Plan 1. Gobble up attractive assets affected by global stock market crash. That was resisted internationally. Plan 2. Undermine decoupling. Enable relocation through Chinese investment and tutelage. Only countries like Bangladesh agreed. India was vying for Global Leadership also. Hence Plan 3. India and ASEAN had to be forced into submission to re-establish global dependency on China.  Isolation would then automatically end.  India, a prime competitor, had to be dealt militarily. Australia, Hong Kong, Taiwan, and others needed different levers. The key – derail relocation/ decoupling through coercive control taking advantage of a weakening USA and a divided Europe. The BRI and Made in China 2025 would eventually recover. The ‘Superpower 2030’ plan would go through with some delay.

However any conflict with India could escalate and slow down the economy unacceptably. Hence the Chinese aggression had to be low key, calibrated, but belligerent to assert strategic control politically and economically. The hallmark of the current Sino Indian standoffs is that even till date Chinese deployments are not tactical. All they have tried is to demonstrate force, manufacture victory, talk peace, and re-establish economic control so that India cannot rise. Once that was achieved, the rest would follow suit. In this context, China’s Unconventional Levers of Power in World Affairs makes immense sense. If Galwan action had gone their way, China’s aim would have been achieved. However that was not to be. India stood up and inflicted a bloody nose. China has realized that it has miscalculated. Its superpower ambitions are at stake. It started talking peace.

An isolated China is in a two-front situation with its biggest competitors. PLA is negotiating with the Indian Army after the bruising it received at Galwan.  Substantial PLA forces will be tied down till status quo ante is achieved. Three US carrier fleets pivoting around Taiwan in South China Sea are an overmatch for PLAN. The USA is determined to not let China claim South China Sea as its own. Other nations are aligning to this. Floods in central China, periodic surfacing of the Wuhan Virus, Swine flu and Bubonic plague outbreaks are adding to economic and social problems. Hong Kong situation is still volatile. Banning of apps by India and Huawei’s ouster from UK and USA will have a wider effect on the Chinese information game.  Bank runs are surfacing. Bank withdrawals are being limited. Combine it with Zhou Li’s views on economics – jobs, production, exports, logistics, weak consumption. Problems galore.

Back to the Virus. It is still raging. As the virus continues some decoupling is automatically happening. People’s habits are changing. In addition, big players like Apple and Microsoft are gravitating towards India. Others will follow. It may appear that other countries are highly infected by the virus and China is better off. However other countries and communities have started coexisting with the virus better. The bulk of the Chinese population is still not affected. Chinese strict lockdowns just kick the can down the road. The problem is still ahead.

In May, Xi Jinping exhorted China to be prepared for the worst-scenarios and  PLA to prepare for war. The ‘Chinese Century’ and superpower status by 2030 is receding. This was what he had in mind. Decline of an aging China will be accelerated by lack of international trust. Xi Jinping knows this. That is why he has now written to Global CEOs to say that fundamentals of China’s long term growth will not change.  Xi Jinping has not given up on his dream. His last gambit?

If China declines India must rise. So it is in India’s interests that an aging China declines. Prepare and act accordingly. The odd finger at Pangong Tso is irrelevant. Think beyond that.

India rises despite setbacks and chaos. This is its history. Virus, China, Pakistan, Floods, Earthquakes et al, affect India but cannot stop it. India underestimates its greatest strengths – diversity, vitality, soft power, democracy, assimilation, and trust. India has the skill set to rise. We the people along with the government must capitalize on this.

The Indian Armed Forces are strong enough to hold China at bay to let India grow. If they are strengthened, India will grow faster. Respond accordingly.

Dealing with The Middle-Aged Kingdom

While Chinese comprehensive national power, is much greater than India’s, it is not overwhelming. On the contrary, India has the power to derail the Middle-Aged Kingdom. The following needs to be strategically conveyed and executed.

Altering the status of LAC unilaterally by China is simply not acceptable.  We should not step back. China cannot afford war and is not prepared for it.

Do not give any trade concessions to China to appease it. Do not be in a hurry. Do not buckle.

Dry out Chinese seepage into our society. Deny data and information to China.

Ensure Atma Nirbharta and relocation through wise policy and implementation.

We have heard many veterans talk on TV shows. This different view of a couple of strong and silent senior veterans merits consideration: –

…. keep the temperature high in Ladakh. We have tied down three Chinese divisions and some amount of his mechanized and air resources. Keep creating tactical situations should he try to thin out.  This will make it difficult for him to create too much threat elsewhere. Many countries will be eternally grateful to us. We are used to living and working with sparse resources. Not China…  by now all our neighbors, among others, know that China can at best make small tac gains against us…as regards degrading China’s national power we are sitting pretty…