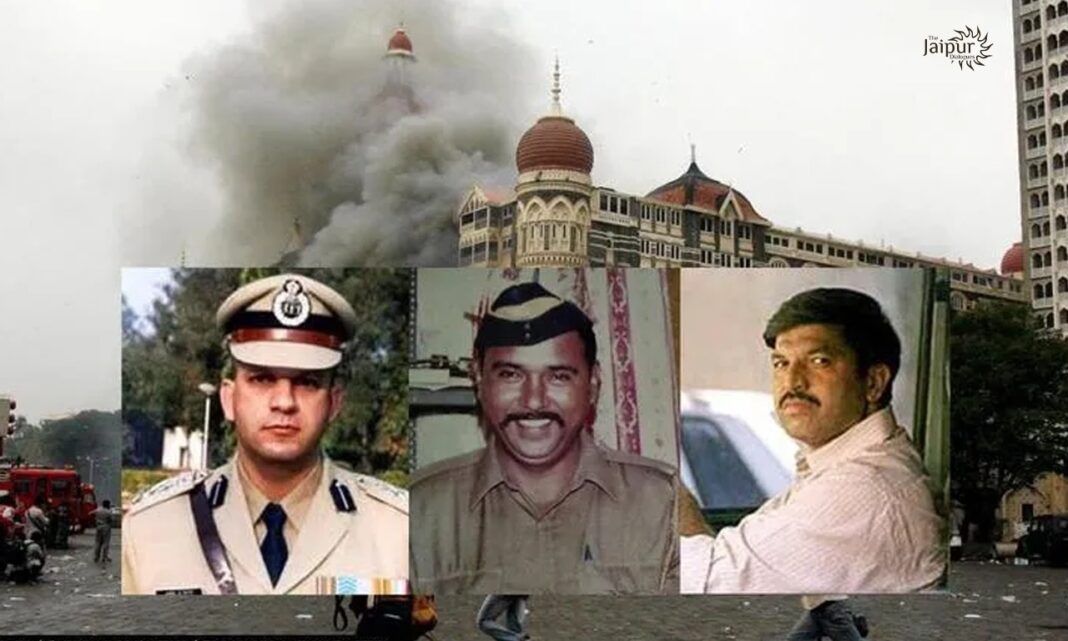 Indians observed the solemn date of 26/11 (2008) recently, a date they will never forget, like the 9/11 USA attacks. It wasn’t just Mumbai that was brutally attacked, but a larger message was sent to Hindus as a whole. The purpose of this terror attack was to destroy Hindu identity and portray Hindus in a negative light.

The Terror Plot to Malign Hindus

The Security lapses were evident in the way the two Pakistani terrorists entered Mumbai and caused havoc. However, it was not surprising that the state and the central government maintained a baffling silence. A fact that can be gauged is the fact that the then Home Minister appeared in different attires for media appearances. The terrorist attacks led to the death of many innocent people, ruined hundreds of families, and terrorized thousands of Hindus. The brazen manner in which two Pakistani terrorists entered Indian territory showed their specific training and pre-planned attack on Hindus.

It was evident from the unabated shootings at the landmarks of Mumbai that these terrorists were unfazed by anything. Their attitude, rather, was one of ‘We can do what we want, and nobody can stop us’. From CST Terminus to Girgaum Chowpatty to The Gateway of India, their route demonstrated how well-versed they were and how two-gun-wielding terrorists could bring down a city. Though Ismail Khan had already been killed, Kasab was able to survive because of his Jihadi training. The Jihadis are trained to live only for Allah and to spread Islam, so they are blinded by hatred and don’t fear death.

Although both terrorists were believed to be dead, Kasab survived and pretended to be dead. At this point, he charged at Tukaram Omble, who had approached him cautiously. Tukaram Omble served as a human shield to capture the terrorist and protect others. During this entire scuffle, Omble took 40 bullets, all so that Kasab could be captured alive. Omble’s unparalleled bravery, valiance, and smart thinking saved the lives of so many innocent people, who could have died as a result of the Jihadi’s maniacal drive. The ultimate sacrifices of Bravehearts such as Unnikrishnan, Omble, Ashok Kamte, et al saved Mumbai from these brutal terrorists that night.

After the plot was discovered, Abu Jundal, from Beed, Maharashtra, was identified as the person who handled operations. He had been involved in the higher levels of LeT that wanted to attack India.

An entirely concocted story was told, where Kasab was sent to malign Hindus, and the act was described as ‘Hindu terrorism’. This lie gave ammunition to Congress leaders like Digvijay Singh, Kapil Sibal, Salman Khurshid, etc to blame and target Hindus viciously. Kasab’s Pakistani nationality was vehemently denied by the Pakistani government, whose background check was specifically denied. As part of their vicious planning, the terrorists were taught to speak Hindi instead of Urdu. In addition, they were forced to wear Kalavas on their hands to portray themselves as Hindus.

The disgusting and vile plot to propagate Hindu terror would not have been discovered without Omble’s ultimate sacrifice.

Upon the capture of Ajmal Kasab, the sinister conspiracy was busted, where Jundal and Kasab were able to identify each other. Kasab served as a dispensable instrument for the LeT, among many other ‘Fidayeens’. Having identified each other, Pakistan’s involvement in the dastardly attacks became evident. After Jundal’s arrest, a can of worms opened up in which he revealed that it was an attack on Hindus intended to boost terrorist propaganda. Jundal himself promoted the idea of Hindu terrorists, which was supposed to show the attack was retaliation for the arrest of Sadhvi Pragya Singh and Lt Col. Prasad Purohit.

A deep plan was put in place, where terrorists were trained to speak Hindi and bore identity cards with names like Sameer Chaudhary. Hindus would have been treated like pariahs in India and around the world if Kasab hadn’t been caught.

The entire issue of the false theory blaming the Hindus fell flat on its face. The speed with which this was brushed under the rug was astonishing. A former civil servant, RVS Mani, spoke about the nefarious links between Congress and the ISI. In his book, Hindu Terror: Insider Account of Ministry of Home Affairs 2006-2010, he stated that the then government was fixated on ferociously pushing the narrative of Hindu terrorism. The 26/11 terror attacks were a fixed conspiracy between Congress and ISI, he said, and nobody was willing to debate the facts.

Every time Kasab was questioned, he presented a different narrative, which showed that he was not only confused but also trained not to reveal any information. However, what was shockingly shameful was that he was treated to delicacies like Biryani and other non-vegetarian dishes as if he wasn’t being punished but honored as a state guest.  Adding to it was the interference of the leftist cabal and some irresponsible media houses, who left no stone unturned in denigrating Hindus, by adding salt to the injury. Arundhati Roy stated in an article in the Washington Post regarding the attack on The Taj Mahal hotel that, it’s an “icon of the easy, obscene injustice that ordinary Indians endure every day”.

The sad thing was that no one talked about the Hindu lives lost. No one batted an eyelid at the grave injustice. This has scarred many for the rest of their lives. Many families were broken, and many kids were rendered orphans, all thanks to the perverted ideology of spreading Islamic fanaticism. 26/11 is not just a date, but an event full of poignant memories, reflecting the inefficiency and audacity of the previous government. It was evident that they were complicit with anti-Hindu forces from their inactions and connivance. Hindus should not simply mark 26/11 as a sad event but understand its significance and avoid falling prey to such perverse agendas in the future.