Legend of Lord Dhanwantari – THE BORN OF UNBORN 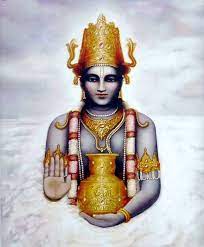 The knowledge of Ayurveda (science of life) is eternal and is revealed in each of the cycles of creation of the universe. When needed, Lord Vishnu himself incarnates as Lord Dhanwantari and re-establishes the tradition of Ayurveda in the world to help relieve some of humanity’s suffering.

Thus it is said;
“One who remembers the name of Dhanwantari can be released from all disease.”

So let’s see the tale of ‘Dhanwantari- GOD OF HEALTH’ on the auspicious occasion of
Dhanteras.

Lord Dhanwantri is said to be first appeared during the great churning of the cosmic ocean of milk (samudra-manthan) He was young and strongly built, his chest was very broad and his complexion bluish black. He had strong arms, reddish eyes, and moved like a lion. He was clad in bright yellow, his curly hair was anointed with oil and he wore shining earrings made of pearl. As he emerged, he was holding a conch, leeches, healing herbs, a chakra (one of the divine weapons of Lord Vishnu’s), and the long sought pot of ambrosia (amrit). It was the same event when Lord Vishnu took a female avatar, Mohini.

At the time of the churning, Lord Vishnu foretold that Lord Dhanwantari would appear again in the world to teach men the science of Ayurveda.

And so he did, when Devaraja (Indra) took a look at this world and saw the people suffering greatly from diseases, this sight made his mind filled with compassion and he addressed Dhanvantari.

“You Dhanvantari the best of gods, the worshipful, listen to my words, you are the best person to help the people of the world, even Vishnu, Lord of the three worlds, did (help the people) by his ‘matasya-rupa’ and other incarnations in the past ”

So you go to the world of men, become a king in Kasi (kingdom/city), propogate Ayurveda in order to destroy diseases.

Listening to God Indra, Dhanvantari came to this world and took birth in the house of the king. He was named as Divodása. When he was still a boy he became an ascetic and worshipped Brahma by hard penance. Pleased with it, Brahma made him the king of Kasi, then he became reputed as Dhanvantari the Käsi-räja. He composed a treatise of his own (name) for the benefit of the people and taught it to his desciples also.

In his incarnation as king of Kashi, Divodasa, he was approached by a group of sages (including Susruta, the great Indian surgeon) with the request to teach them the science of Ayurveda.

In Sanatana-dharma, praying to lord Dhanwantari is supposed to bring sound health for
worshippers, so the birthday of Lord Dhanwantari is celebrated On the day of Dhanteras in an enthusiastic and delightful atmosphere, it marks the beginning of the Diwali festival.