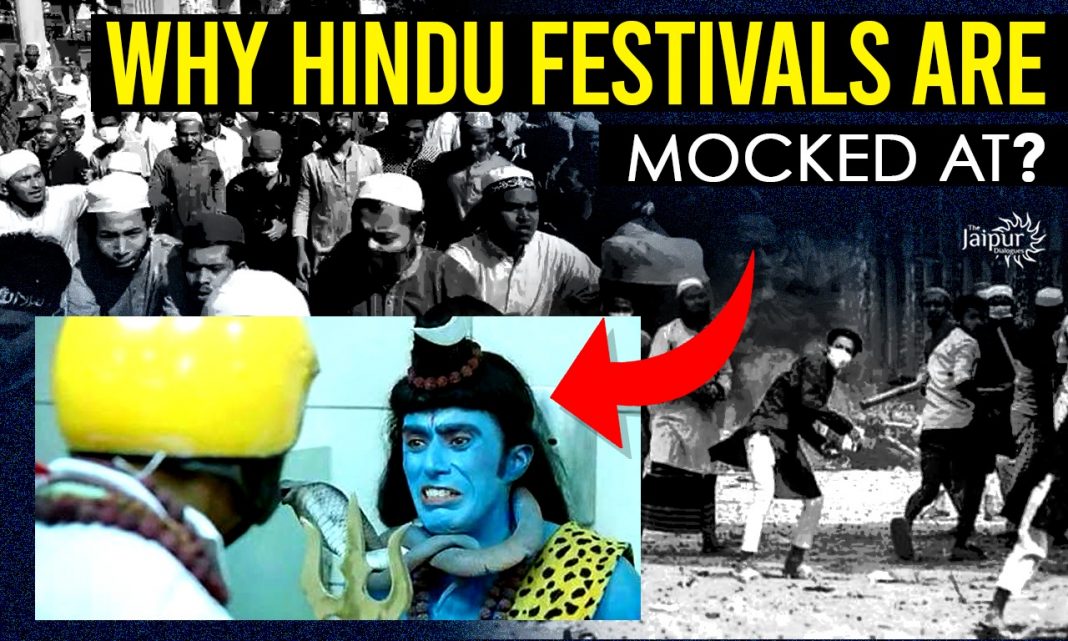 The selective targeting of the Hindu festivals is nothing new, but this unfortunately has weakened the roots of our upcoming generation by distancing them from the Sanatan practices.

Hindus and their festivals have always been targeted no matter what the situation is. Abrahamics have always treated Hindu festivals unfairly in a systematic manner. Every religion has various festivals that are celebrated year-round, across the world. In India, festivals have been scientifically planned and have yielded impressive results. Our ancestors planned the festivals in a thoughtful, and a scientific-systematic manner. Our festivals promote physical, mental, and social health, as well as nurture and balance the environment.

Western society mocks our customs, practices, and beliefs yet they slyly copy them for their own benefit. In a few years we may hear that Ayurveda has western roots!!! Westerners have patented Curcumin (haldi), are offering different Yoga kriyas and are now taking on Indian fasting rituals. The Indians will eventually pay a price for their blatant ignorance and overdependence on the west. The western world is aware of the fallacies present in their beliefs, and hence is attacking our indigenous beliefs.

Hindu festivals are maligned to the hilt by the ‘secular-liberal’ media. Moreover, they have raised the ante in order to further demonize and degrade Hindus. Various Hinduphobic organizations and MNC’s actively propagate anti-Hindu sentiments. In addition to spreading hatred, they conveniently ignore the ills of other religious festivals.

As if the caste based division during colonial rule wasn’t sufficient damage, this agenda seeks to further divide Hindus. A major objective of the vicious forces is to disparage Hindu culture. One may wonder why? It’s because our festivals and customs unite all Hindus, celebrate life and the environment, add value to the economy, promote unity, and brotherhood.

It is crucial to understand the motives behind the selfish motives of these few individuals, organizations, political parties, and celebrities. Their ulterior motive is to stay in power, limelight and authority. All is done to garner votes based on caste by helping conversion of the locals, most importantly misleading our youth into nefarious activities to away from the Sanatani roots.

Media and its Anti-Hindu rants

Among the usual suspects, The Quint, The Wire, and Scroll have selectively targeted Hindu festivals. The ‘supposedly neutral’ media outlets spread lies by targeting children playing holi on the streets, for causing terror on the roads, or wasting water. It is actually a vicious propaganda fueled by the patronizing attitudes of the west towards India. These lies are disguised in the guise of community welfare. Hindus who celebrate these festivals are being misled by these lies. In regards to the slaughter of animals on Eid, how often does PETA or other media cite their concerns? Or how many people react when Christmas trees are cut to be used and decorated? In reality, this hypocrisy is strictly reserved for Hindu festivals. Period.

These lies have distorted the sanctity of our festivals and those responsible should hang their heads in shame. The Wire had come up with the dirty theory of semen filled balloons theory and created a post that said, “The festival of Holi perpetuates rape culture”

Diwali is their favorite festival, so let’s talk about it. It’s a usual rant how crackers spread pollution or how animals are threatened and disturbed by loud noises during Diwali. Diwali is frowned upon by the so-called champions of secularism. By bursting crackers, they claim Hindus cause pollution and significant harm to kids and adults alike. This woke culture has been very successful in invading our dharmic roots and beliefs, unfortunately. Both the current and upcoming generations are affected by this woke mentality. Festivals are no longer celebrated with proper rituals, instead, the emphasis lies solely on superficial aspects. Those who speak about pollution should come out of their AC rooms, chambers, and cars to see the damage they’re causing all year round, rather than focusing just on one day of a festival. Furthermore, why aren’t these pseudo intellectuals concerned about the use of crackers every Fourth of July in the USA? Does anyone ever talk about how much greenhouse gas is released when goats or sheep are slaughtered on Eid?

These wokes fail to realize that by targeting Hindu festivals, they also target the livelihoods of many associated with it. These secular liberals and pseudo-intellectuals are elitists who are insensitive to those from society’s weaker sections. Festivals are a driving force for economic growth; therefore, what do they gain by derailing the economy? Fireworks are typically set off for 2- or 3 days, with the majority being burnt on the day of Diwali.  It appears to contribute roughly 4% to 5% of total pollution. According to experts, the main sources of pollution at the time were stubble burning, vehicular pollution, and industrial pollution, etc. These pollutants make-up nearly 95 percent of the total pollution, but how many people are willing to reduce it by coming out of their ivory towers?

How many celebrities or so-called influencers, who hold placards on every anti-Hindu issue, have addressed the problem with a substantial impact? The hypocrisy of all those with vested interests can be seen with the way treat those who support them. Political parties and celebrities must not forget that their success and accomplishments are due to the support of common people. By raising unnecessary contentious issues, they are belittling the feelings of those who have supported them.

Hindu rituals and festivals always focus on positivity and discourage hatred towards anything or anyone. Rather the focus is on wishing for the well-being of everyone, irrespective of their personal wishes. Every ritual designed to promote holistic positive impact on physical, mental, and social health. These festivals perpetuate a feeling of community oneness and harmony, developing a grateful attitude, and celebrating as per Satvik practices. A worrying trend has emerged due to these ‘secular’ media outfits that intend to show the Hindu practices and sacred beliefs in a negative light. The modus operandi of such media outlets entails denigrating Hindus about the supposedly ill-practices associated with their festivals and vice-versa. Deliberate attempts are being made to make Hindus feel guilty and ridiculed about their way of life. Such connivance has crushed their self-belief that instead of taking pride in their culture, Hindus feel ashamed of practicing them.