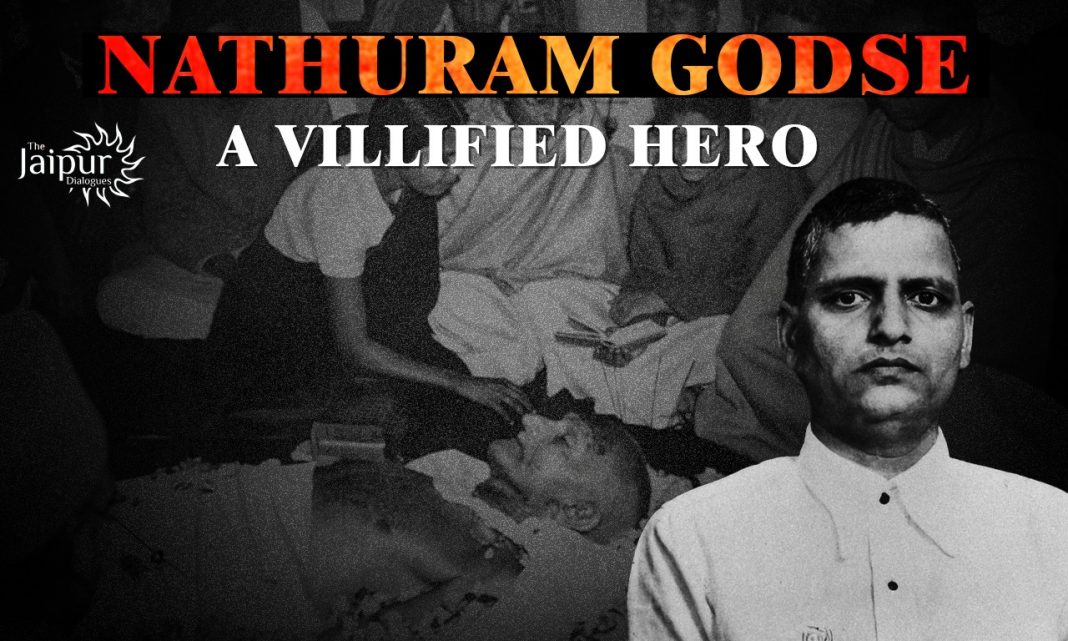 As the date of 30th January approaches every year, vilification of Nathuram Godse picks up pace, one where the pseudo-liberal and the secular gang start their cacophony around how idealistic a man Mohandas Gandhi was and how evil, disgruntled, and irrational a man Nathuram Godse was. Let us accept that this shall continue apace for some more time to come, following this theme, the secular brigade tries to remain in limelight and stay relevant.

It is sad and unfortunate for a Nation with such a rich past, a man has been forced upon millions of Indians to be accepted, revered, and loved as the so called Father of the Nation…. a choice which many Indians do not wish to accept. Mohandas Karamchand Gandhi has been eulogized to a God-like status, one who is above human virtues and criticisms, in short is blemish less. Gandhi is epitomized to an unnatural extent or fatal obsession, not only in India but worldwide. Therefore, anyone holding contra view is ostracized and denigrated in the eyes of the public.

Gandhi’s role in the Indian freedom struggle is over hyped; it has been shown time and again that Gandhi’s efforts in our Independence struggle have been tremendous. This is far from the truth, as his role was minimal, to say the least. His plan for freedom struggle was defeatist in nature and lacked any purpose.

How is Gandhi hailed as the unparalleled hero of Indian Independence is beyond comprehension and what is more astonishing, is the fact that real heroes like SC Bose, Shaheed Bhagat Singh-Sukhdev-Rajguru, Lala Lajpat Rai, Ashfaqullah Khan, Shishir Sen, Bhikaji Cama, and the sacrifice of countless others have been cleverly sidelined. The other major contributing factors towards Indian Independence were the impact of World War Two and the subsequent gradual weakening of the British Empire.

Unfortunately, despite all the truths unearthed about Gandhi’s real life, he still is worshipped as a saintly figure but Nathuram Godse is constantly vilified. We are encouraged to hate, spew venom and denigrate a person who openly shot a person but we cannot ever
criticize Gandhi, a man responsible not only for the death of thousands of Hindus and freedom fighters but also for the painful partition of India? Isn’t this absolute hypocrisy? Indeed, Nathuram Godse was ideologically motivated but he was a man of stable mental faculty, so what prompted him to shoot Gandhi and that too in the entire public purview? Isn’t it unfair
that Godse’s side of the story hasn’t ever been brought to the fore for general discussion? Doesn’t his side of the story also deserve to be heard?

But to understand Godse’s action on 30th January 1948, we need to see the reality behind what prompted him to take such a decisive step? One whose reactions and fallout he had anticipated earlier. But unfortunately, the resultant fallout was not limited to him but the entire Chitpavan Brahmin community suffered a cruel fate, at the hands of the ruthless
Congress Goons. The massacre started as soon as the news of Gandhi’s killing reached Mumbai, this gave an impetus to Congress so that they could implement their sinister plan of assassinating Chitpavan Brahmins, in short, commit genocide against Hindus in the garb of exhibiting anger against Godse and his community. The coming few days were nothing short of horror for the Chitpavan Brahmins, where the ladies were subjected to Mughal era type of
killings, rapes, torture, whereas men and children were physically brutalized and mentally tortured. The massacre was a well-planned event and can be compared to the Sikh Pogrom of 1984, this can be seen from the fact that the unruly goons who were out to destroy the Chitapavan Brahmins were well armed. The anarchy can be gauged from the fact that they didn’t even spare Nationalist freedom fighters, for instance not only Veer Savarkar’s properties were damaged but also his brother Veer Narayan Savarkar was stone pelted to death by the mob.

The Congress-sponsored, friendly media didn’t even bat an eyelid and chose to steer away from this horrific and traumatizing incident. To be fair, it’s nothing new even in today’s era because that is how Lutyen’s media reacts when Hindus are killed and bullied by the peaceful minorities in our own homeland. It is highly unfortunate that the Chitpavan Brahmins have always faced the ire of anti-Brahmin communities’ specifically anti-India forces, irrespective of their immense contributions and sacrifices for the Bharat Varsha. History is witness to the innumerable contributions of Chitpavan Brahmins for protecting and preserving our Sanatani Dharohar, starting from The Peshwas who were the backbone of the fierce Maratha Empire to the eminent freedom fighters like Lokmanya Tilak, Veer Savarkar, Gopal Krishna Gokhale, Mahadev Ranade amongst countless others. The Brahmins of Maharashtra have always been at the forefront of spearheading the protection of Hindus for centuries, this has led to them creating enemies on multiple fronts.

We have initially brought forward the aftermath of what followed post Gandhi’s death, but why? It is imperative to understand that media vultures and anti-Indic forces capitalize on the death of Gandhi to vilify Godse, and in the garb of attacking his ideals, they demonize the entire Hindu religion. Therefore, the question arises if the killing of Gandhi can’t be justified and is treated as an unpardonable sin, then what about the brutal massacre synchronized against the Chitpavan Brahmins in Maharashtra? How can the reaction to Godse’s action become so destructive, disturbing, and cruel? To put it fair and square, it was no retaliatory action against Mahatma’s death but was a perverse covert agenda pushed by the Congress and its goons, and lastly didn’t Gandhi say, “An eye for an eye will leave the whole world blind.”

We shall bring forth to our readers what exactly prompted Godse’s action, why did he bring himself to shoot Gandhi in public purview, a man once he was close to? Was Godse really a criminal or was he hyped to be one by the pseudo-secular gang to defame Hindus? What Godse did isn’t justifiable by any measure but doesn’t one deserve to be heard? It always takes two of a hand to clap and here too, Godse definitely deserves to be heard.