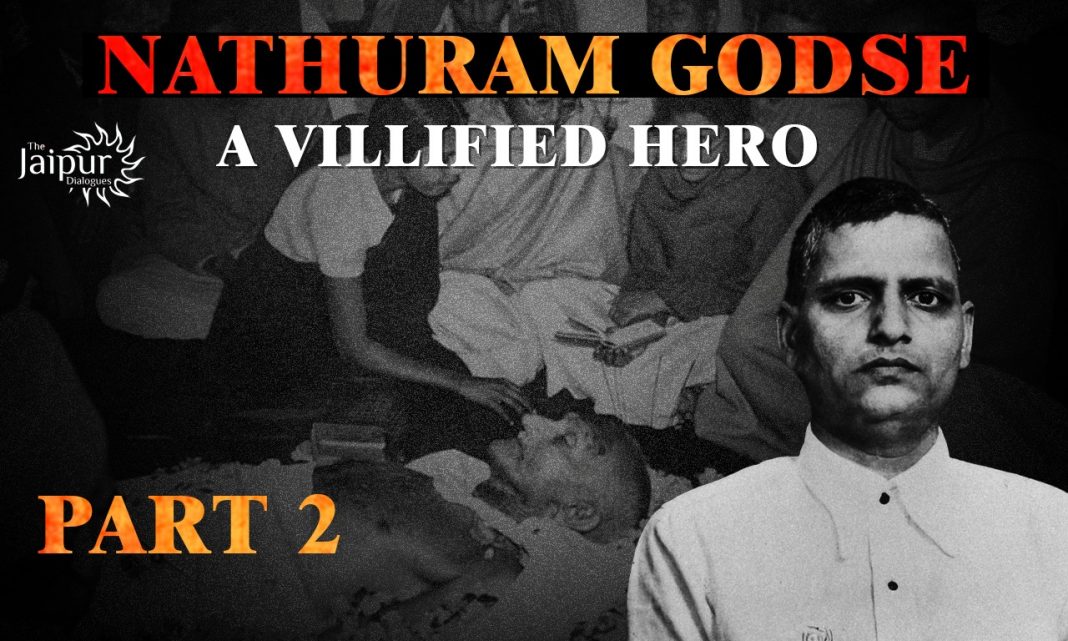 Those of us familiar with history know what happened to Gandhi on 30th January, when he was shot dead by Godse on the grounds of Birla House, located in central Delhi. There can never be a valid justification for killing anyone, but what exactly led to a hinsak death for someone who advocated following ahimsa throughout his life?

Nathuram Godse, a right-winger by ideology and a proponent of Hindu nationalism, was both a member of the Rashtriya Swayamsevak Sangh (RSS) and the Hindu Mahasabha. It is unfortunate that even after so many decades, Godse is still portrayed as a zealous Hindu bigot by people who malign his image. Nathuram Godse and his assassination of Gandhi are misunderstood by the public, which further underscores the need to unearth the facts. People have been fed false narratives that have clouded their ability to assess the incident impartially. For Godse’s trial, a special court had been established to hear the case against Godse and his co-accused. Among the three trials held at Red Fort in Delhi, it was one of the quickest trials in the Indian legal history. Godse was one of the twelve people accused of varying charges; however as protocol, counsel was enlisted, but quite surprisingly, the accused themselves were supposed to respond to the charges leveled against them. Before this, both the prosecution and the defense submitted written statements, where 149 witnesses appeared for the prosecution but none for the defense. Ultimately, both Narayan Apte and Nathuram Godse were found guilty and given the death penalty by hanging, following the verdict.

Those charged as accused had appealed their convictions and sentences to the upper court, but Godse chose not to do so. Godse accepted the death penalty but appealed against the lower court ruling that found him guilty of conspiracy. During oral arguments in the High Court, he maintained that there was no conspiracy, and he should be held liable for his own actions, and everyone else was innocent. Except for Dattatraya Parchure and Shankar Kistayya, the High Court confirmed the decision of the lower court. As a result, they were both acquitted of all charges. Both Godse and Apte were sentenced to death by hanging. Interestingly, two of Gandhi’s sons, Manilal Gandhi and Ramdas Gandhi, appealed for the commutation of their death sentences, but their appeal was refused by India’s then Prime Minister Jawahar Lal Nehru, Home Minister Vallabhbhai Patel, and Governor-General Chakravarti Rajagopala Chari. Godse and Apte were ultimately hanged at the Ambala Jail on November 15th, 1949. According to the book written by Jay Robert Nash Almanac of World Crime, at the hanging which took place Apte died instantly, but “Godse died slowly by the rope” and he choked “to death for fifteen minutes”.

The popular image of Godse has been characterized as a violent, hot-headed, right-wing fanatic, which is far from truth. Truth be told, Godse was a soft-hearted person who cherished the nation’s interests, and this is why he was perturbed by Gandhi’s policies. He firmly believed that the Hindu community suffered from tremendous amount of pain and trauma because of Gandhi’s flawed policies and his allegiance to the Muslim community. Gandhi’s insistence on paying Pakistan Rs. 55 crores post independence added fuel to fire. This being an economic burden on India’s financial resources, was also a flawed way to appease Muslims, and the even the then Government was not convinced to pay the sum. Congress was torn between surrendering to Gandhi’s will or carrying on without agreeing to his demands. Eventually, Gandhi faced no opposition in Congress, and everyone there backed his primitive and myopic vision, coupled with his threats to go on a fast unto death. Famous authors Larry Collins and Dominique LaPierre of the book Freedom at Midnight wrote about Gandhi Ji’s stand that “It was intolerable to him that so soon after her birth India should be guilty of so immoral an action.” Gandhi proved himself more to be the Father of Pakistan, by granting it unnecessary favors, irrespective of its anti-India stance and subsequent activities. Gandhi was blinded by his love for Pakistan and overlooked the immoral actions pursued by them; this was too much not only for Godse per se but for the entire country.

Godse did not agree with Gandhi’s policy of Muslim appeasement, proving that he was not against Gandhi, but against his policies. He had decided to kill Gandhi because he felt Gandhi had prejudices against his community. It was for this reason he bowed in reverence before Gandhiji prior to killing him. Godse spoke the following during the trial, which proved the above-stated fact …

“It was not so much the Gandhian Ahimsa teachings that were opposed to by me and my group, but Gandhiji, while advocating his views, always showed or evinced a bias for Muslims, prejudicial and detrimental to the Hindu Community and its interests”.

According to Godse, Gandhi was a selfless patriot whose contribution to nations’ freedom struggle could not be understated, but the painful and bloody partition could have been avoided if Gandhi hadn’t been biased in his demands and had been more considerate of the Hindus, Sikhs, Sindhis, and other minorities in former Pakistan. Godse believed a person shouldn’t be too authoritative to go so far as to sacrifice national interests and divide it because that would be a painful, traumatic, and an overwhelming event; Gandhi belonged to India and not vice-versa.

Gandhi’s shooting by Godse might have severe implications, and Godse was conscious of them as evidenced by his statement in the court, “I thought to myself and foresaw I shall be totally ruined, and the only thing I could expect from the people would be nothing but hatred … if I were to kill Gandhiji. But at the same time, I felt that the Indian politics in the absence of Gandhiji would surely be proved practical, able to retaliate, and would be powerful with armed forces.” Nathuram Godse’s preparedness and awareness can be seen in the way he presented his arguments in front of Justice G.D. Khosla, who tried Godse with two other judges in the East Punjab High Court and sentenced him to death. The judge was highly astonished and influenced by Godse’s reasoning’s that he wrote the following in his book, The Murder of the Mahatma, “I have, however, no doubt that had the audience of that day been constituted into a jury and entrusted with the task of deciding Godse’s appeal, they would have brought a verdict of not guilty‟ by an overwhelming majority”.

Certainly, Godse has been successfully portrayed as evil and rogue, who displayed utter disregard for Gandhi’s sacrifices, since he was ‘supposedly’ a bigoted Hindu fanatic. So far the story has been conveniently one-sided, but what about Godse’s version of the truth? Why was it not brought out in public, especially in a democracy like India where Freedom of Expression is considered fundamental? This was because Nehru’s administration muzzled the free voice of the press and didn’t allow Godse’s statements told to the judges to be either broadcasted or printed. There is no way to know the exact reason behind such a biased step now, but it is clear that Godse adequately justified his action.

Under unfortunate circumstances, both Nathuram Godse and Narayan Dattatraya Apte were hanged even before the Supreme Court of India was created. Nathuram Godse’s family members had petitioned the then Governor General for mercy after Godse was sentenced to death for Gandhi’s assassination. Although Godse did not seek clemency, members of his family did not tell him about their subsequent requests for mercy. The Privy council ultimately denied the request for mercy to the families of the accused, including Godse’s.“They had refused to grant leave on the ground that even if they did admit the petition, it would not have been decided before January 26, 1950 when the Indian Supreme Court was to be born.” Moreover, if the Supreme Court of India was functional at that time, it would have had the jurisdiction to hear the Special Leave Petition. Sadly, and in violation of Godse and others natural rights, Godse and other accused were denied the chance to file their last appeal, eventually leading to his and Apte’s hanging. Considering that Gandhi and his followers preached ahimsa and its ideals, how fair was the treatment meted out to Godse, in the eyes of the latter? Contrast the above scenario with that of Yakub Memon’s and Afzal Guru’s case, the travesty of the same would be painfully apparent.

It is high time that we need to understand that Godse’s side of the story that has always been suppressed in our country. The analogy of ambivalence upon understanding two different aspects for the same situation remains intriguing. We all need to ask ourselves, did Godse deserve to die like this? Didn’t he deserve fair justice? The answer is known to all, but now is the time to bring it before the public domain.