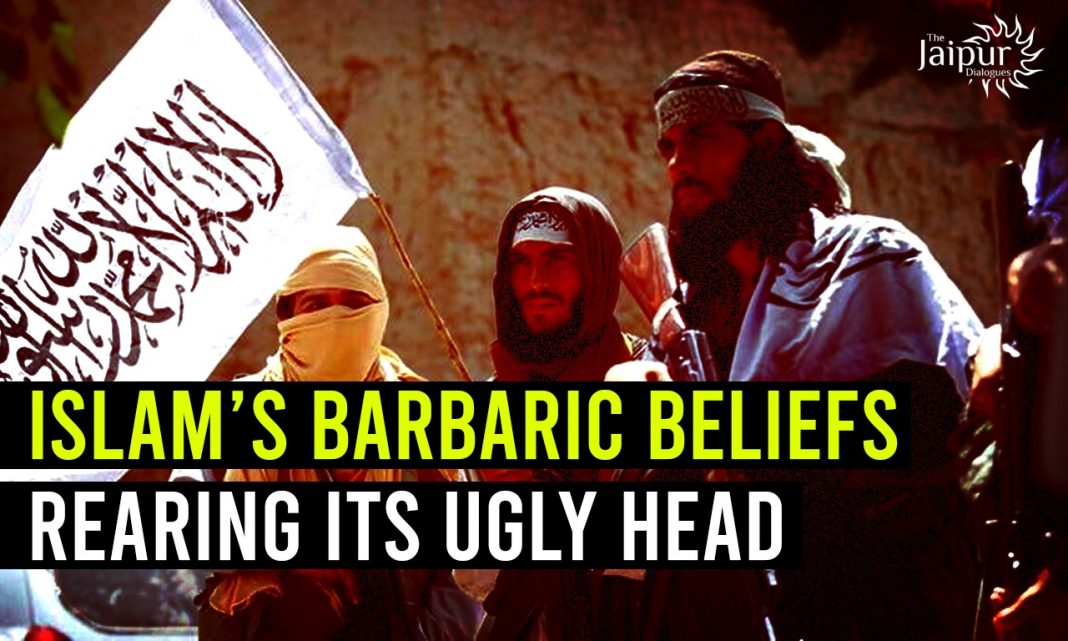 The hard-line beliefs and customs of Islam, adhered by its followers are not something new. In the past few years, the Islam ‘ists have worked forcefully to not only follow it but perpetuate it upon others. Islam ‘ists first portray themselves as weak, then cry for rights, gradually build power, and then either force others to embrace their religion or wipe them off the face of the earth. This is what they have been doing for centuries, and it’s what they will keep doing. Sad and unfortunate is the fact that Hindus are yet to wake up to this obvious reality; by alienating themselves from actual life on the ground, they have conveniently wrapped themselves up in an opaque cocoon.

Muslims are always working to advance their agenda. The agenda hides behind the pretense of protecting their own customs and traditions. However, ultimately, they seek to force their religious beliefs on others, leading to social unrest and extremist movements. The sad reality is that even after the atrocities of Muslim rulers have been brought to light by history, Hindus are still unaware of the seriousness of their designs. In a world where people maltreat adages such as Vasudhaiva Kutumbakam and Servo Jano Sukino Bhavanthu, it isn’t something to be proud of when Hindus follow them. After such a traumatic past of violence and slaughter during the partition struggle, Hindus need to wake up from their deep slumber of secularism. Hindus must act now to prevent what has happened and is still happening in Pakistan, Afghanistan, Bangladesh et al from happening here. Many members of the so-called peaceful community living back in India have acted as ‘Trojan Horses’ at the expense of national interests, unity, and cultural values.

As elaborated earlier, Hindus fail to realize that these purported actions taken by so-called ‘minorities’ are all part of a setup drama and a false act of victimization.  The pseudo-liberals and the secular brigade of India, which support anti-Hindu activities on the basis of equality and expression, further fuel this propaganda.

Hindus are going to be in grave danger in the near future, if they do not wake up. What is happening in Karnataka is not an isolated incident, but rather a preview of what Hindus Muslims are capable of. It is crucial for these peaceful to understand that they are part of a secular setup and not a nation ruled by the Shariah laws. As usual, all those who were crying hoarse for the Hijab here in India and that every girl has equal rights to study did not raise their voices when atrocities were meted out to young girls under the Taliban rule in Afghanistan or the ISIS rule in Syria… What happened to the rights of those girls?

Irony is that wearing a hijab becomes a ‘fundamental right’ for Muslim girls, yet wearing Saffron Gamchhas and Dupattas becomes a threat to democracy? Every normal or civilized society stipulates a conduct code for the people living there and it is in their interest to follow it. Else, the country would turn into a lawless and anarchic state, like that of Pakistan, which is not at all an ideal condition. Islam ‘ic cultures have always been against idol worshipers and Kafirs. They work on a holistic agenda in order to spread their footprint across the globe.

It is with heavy hearts that we note the passing of the Swar-Kokila Lata Mangeshkar ji. Not only had she rendered some timeless and memorable music, but had also gained immense respect on a global platform, both for herself and for India. Unlike most singers, Late Lataji was not just a singer, but an institution unto herself; one whose talent and melodious voice reverberated through the generations and found a connection with people of all ages, an achievement few can achieve. People across the globe were still teary-eyed when bidding her adieu, but unfortunately for her, a few rabid haters could not control their secular emotions and posted some unsavory and banal comments about her. She was attributed with insensitive terms, unbecoming on such a somber occasion.They attacked her religious beliefs because she stuck to her Sanatani roots, unapologetically. This is not a one-off incident, but a symptom of a chronic rot of antipathy these ‘Sickculars’ hold against Hindus. Had some infamous ‘Sickculas’ Hindu-bashing figure passed away, the story would have been different.

When fanatic Islam ‘ists project their dominance, many of their dark faces emerge. Wearing a Hijab, even if is a sign of freedom, should be restricted to their personal space and not forced upon others to tolerate it. Hindus should realize that two hands make a clap, and respect is a two-way street, being subservient always welcoming, doesn’t do any good especially when dealing with extremists. They should be aware that Muslims have a Mazhabi right to kill polytheists, infidels, and non-believers as stated in Sura 9- Verse 5.29, 123 of the Koran. In chapter 3.28 of Al-Imran, it states not to associate with disbelievers and to give preference to believers, and guard against the former since they don’t believe in Allah.

Rather than being few and far between, these references are far too plenty and reflect the barbarous and rudimentary beliefs that define Islam and its adherents. The savage incursions in India, and other locations, in the past, bear testimony to the fact that Muslims don’t believe in peaceful co-existence, but violence and greed. The Hindu population ought to stop being blindsided by their love and empathy for those who wish to kill them and wipe out their existence; otherwise, they are endangering not only theirs but the future of their upcoming generations, which is destined to be filled with bloodthirsty, cruel and heartless barbarians.