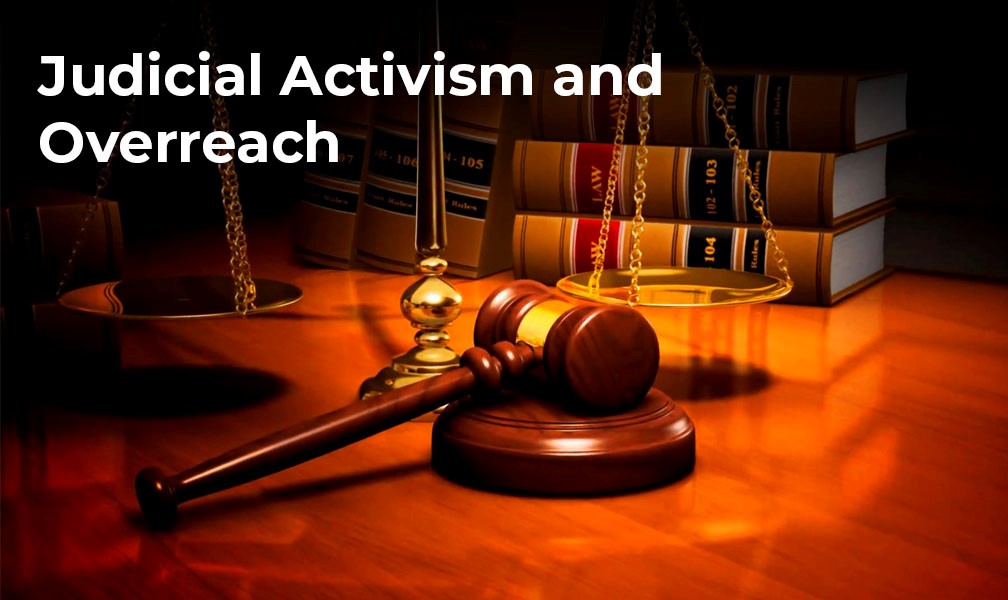 Soli Sorabjee an Indian Jurist and former Attorney-General of India had commented that “Judiciary should only step in if the fundamental rights of people are affected by the executive or legislative inaction.” Judiciary is one of the most respected institutions in the country. However, it is also true that the actions have consequences and people hold the executive accountable. Judiciary may have good intentions in passing an order, but it holds no accountability for it. As observed in the Union of India vs Deoki Nandan Aggarwal case (1991), “The power to legislate has not been conferred upon courts”. The courts should refrain from venturing into policy decisions.

The recent example of the decision of Allahabad HC to impose lockdown in 5 districts of Uttar Pradesh till 26th April, seemed arbitrary as there was no empirical evidence to suggest why lockdown was imposed till 26th? Why not 23rd? Why not 30th? The judiciary has repeatedly shown its disconnect from the ground where it gave orders which looked almost impossible by the executive to implement it. Even the order to ban liquor shops around 500m from the highway looked something which was a bit poorly thought order which did not consider any ground reality of the people depended on the shops and their livelihoods and the possible impact of the decision on the economy. Even in the Arjun Gopal vs Union of India case (2017), the judiciary passed an order to fix the timings of bursting fireworks in India and prohibit the use of non-green fireworks although there is no law to such effect. This decision had an impact on the 6,000 Crore firework industry which also employed 5 Lakh people. This was an area of a policy decision, and the respondents had argued that there was no sufficient evidence to prove that burning crackers was responsible for noise or sound pollution and whether it was a serious problem that required a ban.

At the same time nonetheless, Judicial activism has also had some positive impacts on society like the Vishakha guidelines. Scholars like Upendra Baxi had held that the activism of SC was chemotherapy for the carcinogenic politics of India, which ensured rule of law and did a good job of deepening democracy and protection of liberal order. Justice Bhagwati held the opinion that- those days are gone where the judiciary was expected to stay in its mandate, now if the judiciary is not active, it is seen to escape from its responsibilities. Indian sociologist and scholar Kalpana Kannabiran held that “the era of pedantic legalism is over and the era of judicial activism has started”.

However, judicial activism is seen more in a negative light than positive light by most scholars. Pratap Bhanu Mehta in his article “ Indian Judiciary: The promise of uncertainty” held that the decisions of the judiciary are self-perpetuating, and highly paradoxical. In his book ‘Public institutions in India’, he held that- Judiciary has protected the constitution, but in the process, it went beyond the constitution. He also held that the judiciary in India is a political institution and most of its judgments are not based on legal principles, but political balance.

Bhiku Parekh also commented on the state of the Indian judiciary that India is becoming a case of ‘Judicial Co-governance’. It is becoming a judicial democracy like the US.
The judiciary recently also stayed the decision of implementing the farm laws, which was seen completely in the domain of the executive. Attorney-General of India KK Venugopal had questioned the intervention of the judiciary on 3 grounds:

The Attorney-General questioned the decision of staying the law without even hearing it.
In Ram Jawaya vs State of Punjab (1955), the judiciary held the view that there should be a separation between the 3 organs of the government and that one organ should not encroach in the domain of the other, else this can upset the delicate balance of the constitution. However, in recent times, the judiciary is seen to emerge as a parallel power to the legislature. According to Justice FJ Katju, “Judges should tell the law if there is one, not make it if there is none.”

There should be a separation between judicial review and judicial activism. Judicial review is the ordinary functioning of judiciary, but when the judiciary goes beyond that and states what the law should be, it is seen to be activism by the judiciary. One of the extreme examples of such activism has been the basic structure doctrine invented in the Keshwanand Bharti case, where judiciary went ahead and assumed the role of not just the legislative assembly, but constituent assembly. Late Arun Jaitley had cautioned legislators against ceding more powers to the judiciary and that it is a timely reminder of the courts’ increased intrusion into the government’s actions. “Step-by-step, brick-by-brick, the edifice of India’s legislature is being destroyed.”

There’s always a tussle between the 3 arms of the state to prove their supremacy, but we should keep in mind that in a democratic country, the constitution and the rule of the law is supreme. The Judiciary has had an overall good track record as compared to the other 2 branches of the state. It has protected the sanctity of the constitution at times by stepping in and being active, but what is an exception should not be a norm. Judicial activism has benefitted the country, but it doesn’t mean the country should be run by the judges. The judiciary acted as a safety valve in the era of decline of the parliament, but it should try to restrain when the law is passed by Parliament with due procedure and does not seem to impact the Fundamental Rights of the citizen. The line between judicial activism and judicial overreach is very narrow. When the judiciary oversteps its powers, it may interfere with the proper functioning of the legislature and other executive organs of government. Judicial overreach destroys the spirit of separation of power and is undesirable in democracy. The judiciary can be medicine but cannot become a piece of daily bread.