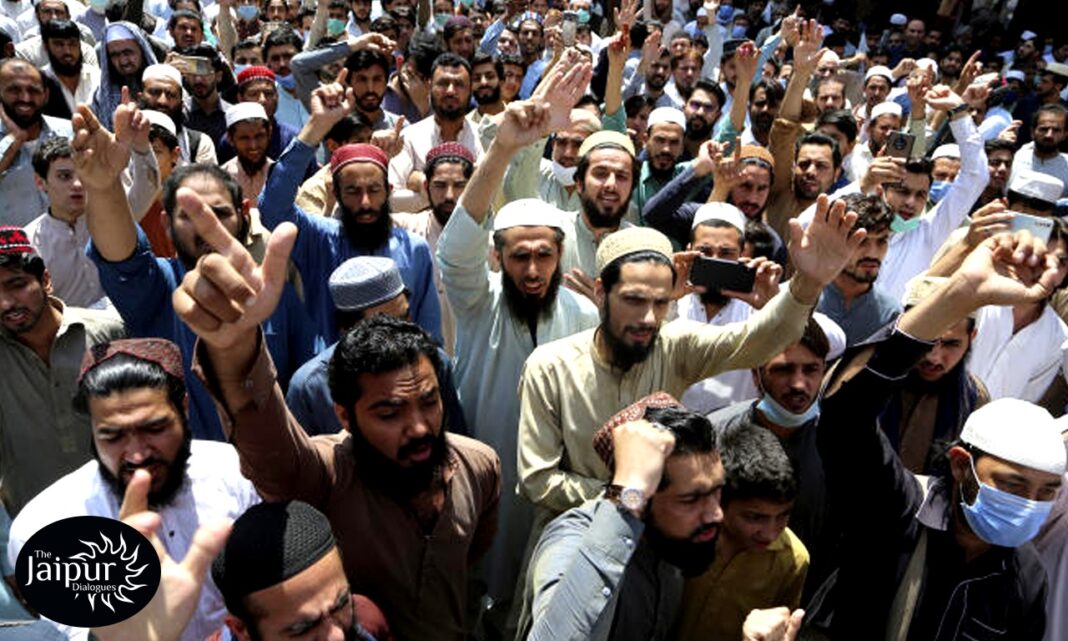 Pakistan was removed from FATF’s terror-financing grey list this year, in a not-so-surprising move. Because the USA has an active role to play, it’s not shocking, and it was an opportune time for it to happen. In a recent speech, American president Biden criticized Pakistan as a global hub for terrorism. A week has passed and one wonders what has changed suddenly!

Internationally renowned Islamic terrorists have been sheltered in Pakistan, a terror hub. Hafiz Saeed carries a $10 Billion cash reward and Pakistan isn’t turning him over to America. The removal of Pakistan from the Grey list will further embolden its nefarious plans throughout the world. America’s love-hate relationship with Pakistan is a big mystery to the entire world.

Pakistan 🇵🇰 exiting the FATF grey list is a vindication of our determined and sustained efforts over the years. I would like to congratulate our civil & military leadership as well as all institutions whose hard work led to today's success. Aap sab ko bohat bohat Mubarak 🙂

The Financial Action Task Force (FATF) is commonly referred to as the world’s “terrorism financing watchdog”, which means it is the author — and custodian — of an international regime that works to ensure that the flows of money in the global financial system are not misused to fund terrorist activities.

FATF describes itself as an inter-governmental body that works to “set standards and promote effective implementation of legal, regulatory and operational measures for combating money laundering, terrorist financing and other related threats to the integrity of the international financial system.”[1]https://indianexpress.com/article/explained/explained-global/pakistan-off-fatf-grey-list-what-this-means-8224280/

Being on the Grey list means “jurisdictions under increased monitoring”. Countries placed on the list have to comply with certain conditions laid down by the FATF. If these countries fail to comply, then they run the risk of being “blacklisted” by the FATF. Their compliance is reviewed continuously by the FATF. According to the FATF, “it means the country has committed to resolve swiftly the identified strategic deficiencies within agreed timeframes and is subject to extra checks”. 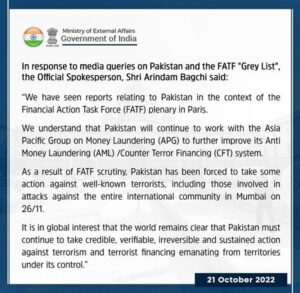 According to FATF, Pakistan has been removed from the list after being included in June 2018. On October 21st, 2022, FATF announced “Pakistan has strengthened the effectiveness of its AML/CFT regime and addressed technical deficiencies to meet the commitments of its action plans regarding strategic deficiencies that the FATF identified in June 2018 and June 2021, the latter of which was completed in advance of the deadlines, encompassing 34 action items in total.”

According to India’s special prosecutor, Ujjwal Nikam, Pakistan’s removal from the FATF grey list was unfortunate. He stated, “It’s very unfortunate that FATF has removed Pakistan from the grey list. FATF gave points that Pakistan has worked on improving lists. But I disagree with FATF. FATF must rethink their decision. Pakistan must be put in the ‘black List’. “While talking to ANI, he said, “we gave proof to Pakistan at the time of 26/11, but they didn’t take any action on it. Dawood Ibrahim, Kasab, and Zakir Rehman conducted terror acts in India.”

Because of Pakistan’s ill reputation, which is ten steps ahead of it, this is a threat to world security. Globally renowned Islamic Jihadists and terrorists all descend from Pakistan. As a result of their removal from the FATF grey list, they will have easier access to enhanced funding through which they can easily summarize their terror activities. India will bear the ill effects of the same via cross-border terrorism, putting our soldiers and Jawans at risk. This tacit support of the USA doesn’t smell well-thought-out but is rather selfish, designed to put India further under pressure and at risk. A hypocritical stance on a global platform against India is a desperate attempt to curb India’s growing power, and Pakistan is nothing more than a pawn in this game.