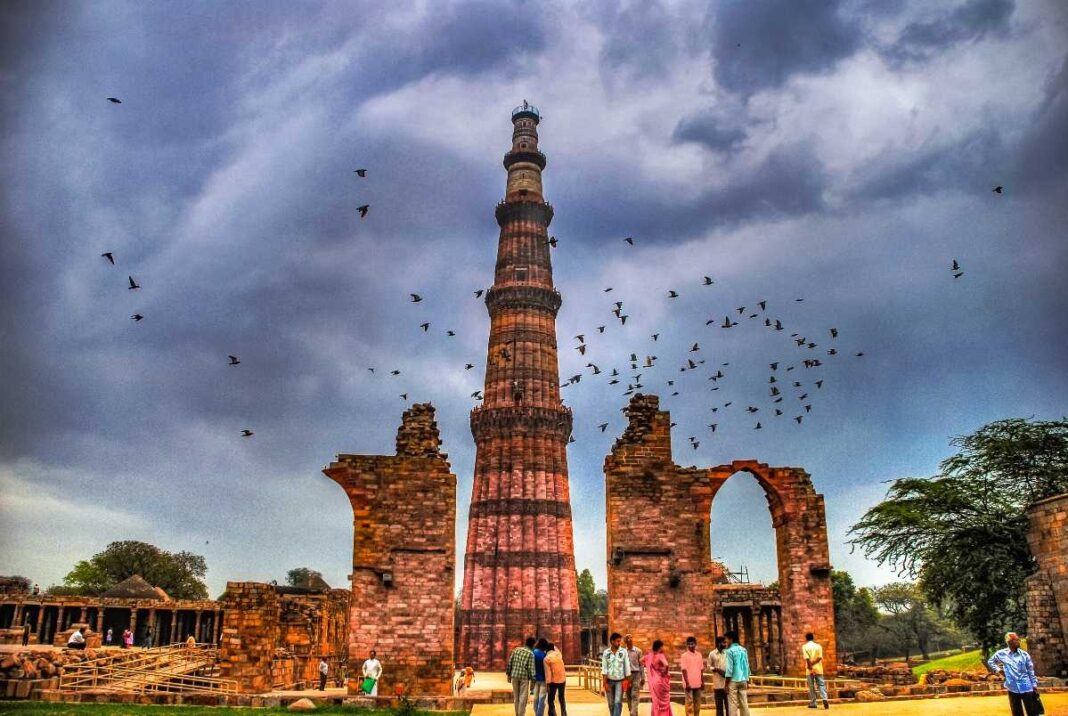 Incessant hardwork done by the left-liberal cabal to disprove the true history of Bharat is commendable. Even after being proved wrong multiple times by the Indic wing and Sanatanis, there is no end to the propaganda by Romila Thapar.

The Qutub Minar attributed to be built by a slave dynast Qutb-uddin Aybak, is originally a Vishnu Stambh, built inside a Hindu Temple Complex. But the propagandists never stop claiming the false narratives as true history.

Veterans of all leftist intellectuals Romila Thapar again raised the issue of Qutub Minar at the recent IIC, Delhi lecture.

At the said lecture, Romila Thapar commented on the various inscriptions found in the Qutub complex, that the inscriptions prove that those people were neither forced labourers nor converts. She is pointing towards the architects Chahada Devapala and mason Lakshman, Nana, Solha whose names are mentioned and they used to invoke lord Viswakarma. So, according to Romila Thapar this justifies that Qutub Minar was built by Hindu artisans but was commissioned by an Islamic ruler.

Ample amount of destruction has been done by the Nehru-centric secular history retelling in India. Morale of the country has been smashed several times and in the name of ‘professionalism’, the kind of pseudo-historians sprang up through Hinduphobic academia has now been brought to the forefront.

Vinod Bansal, a national spokesperson for the VHP, asserted that the 73-meter-tall tower was constructed on top of a temple dedicated to Lord Vishnu that was erected during the reign of a Hindu prince. “When the Muslim ruler came, some of its portions were reconstructed with the materials obtained after demolishing 27 Hindu-Jain temples, and renamed as Quwwat-ul-Islam (Might of Islam),”

“An inscription over its (Quwwat-ul-Islam Mosque) eastern gate provocatively informs that it was built with material obtained from demolishing ’27 Hindu temples’.”

Focusing on the various Hindu architectural elements found in and around Qutub Minar, BJP leader Tarun Vijay demanded the Archaeological Survey of India that, “The idols are currently placed at the most disrespectful place, upside down at the feet level of visitors. The idols should either be removed or placed respectfully inside the Qutub complex,”

There are various facts surrounding Qutub Minar which are never answered by these ‘professional Historians’ and they go silent over the real aspects of History.

In research monograph by M.S. Bhatnagar, dated 10th, 1977 a detailed description of what actually is Qutub Minar and how it got converted to an Islamic complex.

This was actually a central observation tower of an ancient Hindu Astronomical Observatory. The tower looks like a 24-petalled lotus flower each representing a Hora (hour). This lotus structure is an integral part of Hindu architecture. Around the tower you would fine 27 pillars which represent 27 constellations (Nakshatras).

The Iron Pillar present in front of Qutub Minar specifically invokes Shri Vishnu and the greatness of Vishnu devotee Chandragupta.

All these important facts directly establish Qutub Minar was never an Islamic building rather a Hindu astronomical observatory and a magnificent work of Hindu brilliance.