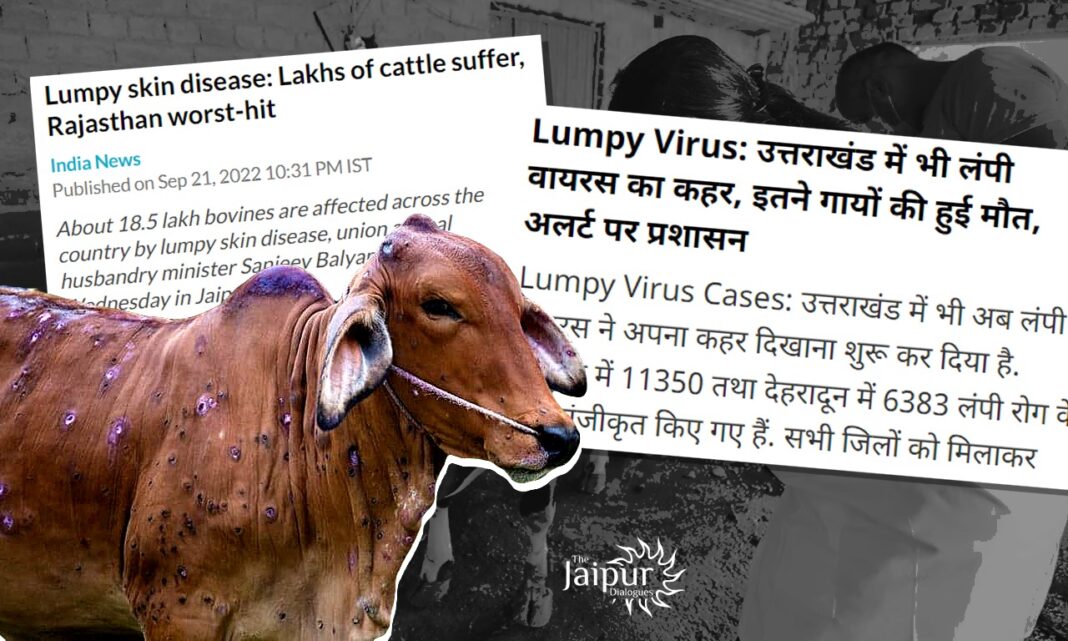 The Lumpy Cow disease is affecting the global economy and impacting thousands of farmers’ livelihoods. The repercussions of this disease have to be understood by all, also what shall be its impact and its severity.

What is the Lumpy Cow Disease?

Lumpy Cow disease is a dangerous contagious disease affecting cattle in India. It is proving to be a deadly disease that poses a serious threat to cattle’s lives. It is caused by a virus called lumpy skin disease virus (LSDV). This virus belongs to the genus ‘capripoxvirus’, a part of the poxviridae family. Humans cannot contract this virus, as it is not a zoonotic disease. Some vectors spread this disease, such as mosquitoes, flies, and ticks, which usually affect cows and water buffaloes. Either direct contact with the vector or contaminated water and feed can transmit the disease. Furthermore, some studies have shown that artificial insemination can spread it through animal semen.

Animals affected by this virus develop lumps on their skin due to the growth of lymph nodes. The name of the disease is derived from this. The nodules might later develop into ulcers and scabs over the skin when the disease spreads. Many symptoms may appear in animals, including high fever, decreased milk yield, nasal discharge, salivation, depression, damaged hides, emaciation, infertility, and abortions.

The disease originated in Zambia in 1929 and spread to various countries. In 2019, it reached Bangladesh, and in 2022 it reached India. It is due to India-Bangladesh’s porous land borders and frequent cattle trade that this occurred.

As of now, it hasn’t been confirmed whether the milk of the infected cattle is safe to drink or not. However, the economic consequences of this disease can be fatal for nations, especially India. With 210 million tonnes of milk produced annually, India is the world’s largest milk producer. Approximately $1.45 billion was estimated to be the economic loss based on the FAO’s risk assessment from 2019-2020.

Animals suffering from the disease lose their appetite as ulcers form in their mouths. Additionally, it affects the farmer’s income because of weak growth, infertility, and the lack of semen for artificial insemination. In Rajasthan, U.P., and Punjab, small or marginal farmers have been most affected by this disease.

Rajasthan and Gujarat were the first states to experience an outbreak, followed by Punjab, Himachal Pradesh, Andaman & Nicobar, and Uttarakhand. The virus spread quickly to J&K, Uttar Pradesh, and Haryana. This virus has been reported in Maharashtra, Madhya Pradesh, Delhi, and Jharkhand recently.

The situation in Rajasthan is appalling as the administration has turned a blind eye to the disease’s economic catastrophe. To combat this disease in U.P., actions are being taken on a war footing. In a recent address, PM Modi showed utter seriousness in addressing the issue. In a significant step, two institutes under ICAR have developed indigenous vaccines against this disease. These vaccines shall be promoted by the central government as they have promising results. In addition to boosting India’s name and prowess in the pharmaceutical market, these vaccines will also help other nations with similar problems.

The disease isn’t only harmful to cattle but also to their farmers, who are at a loss for how to combat it. To minimize the economic damage caused by this, the citizens, public authorities, and the government must work together. Governments should come together, regardless of their differences, since the farmers and the general public bear the brunt. India should be able to eradicate this disease and become an example for the world to follow.