In the guise of secularism, Bollywoodians, aka Urduwoodians, cheat and befool Hindus. A sad reality is that Hindus have willingly funded their own hatred and vile behavior against themselves by these self-entitled celebrities. A number of times, Bollywood has blatantly displayed hatred toward Hindus, hurt their religious sentiments, and unfairly degraded them. Hindus have become the target of all jokes and constant vilification by the ‘Nepotistic Bollywood Gang’. Urduwoodians continue to be vile and hateful towards the majority unapologetically and shamelessly.

Hindu culture and practices are sometimes portrayed as regressive, corrupt, criminal, orthodox, and sexist, sometimes subtle, sometimes blatant. The hatred and bias have existed for decades, whether it’s depicting greedy priests, bloodthirsty revenge-seeking devout Hindu dons, or rapists. Characters like these were deliberately used to affect the subconscious minds of Hindus, who started to hate themselves. Essentially, it was a masterstroke played by the Urduwoodians with utmost connivance to weaken Hindus and turn them into self-haters. A dirty agenda was at play in the film industry, but Hindus were blinded by the glitz and glamour.

An overall healthy societal culture has been eroded due to the gradual and sublime decay of Indic and Sanatan values. We have misappropriated our cultural identity by blindly following these so-called celebrities and following the wrong ideals. Excessive love, adulation, and wealth have inflated the egos of these ‘celebrities’, who treat the audience like a pariah. As a result of this, these celebs continue to fool Hindus and disrespect them openly, thinking the latter to be imprudent. These ‘celebs’ have resorted to hypocrisy as Hindus unite and realize their power. Due to their visible frustration, in recent times Alia, Karan Johar, Vijay Deverakonda, and Arjun Kapoor have each blasted the audience. Their inability to grasp the reality of the situation shows their level of entitlement. 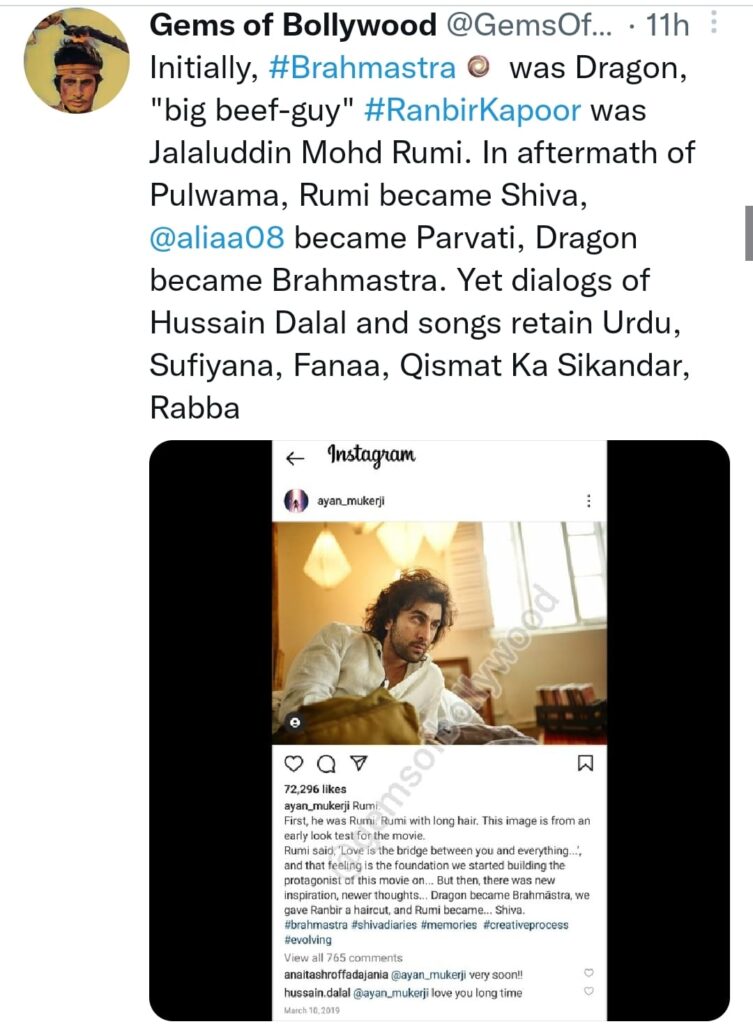 With regard to Brahmastra, one wonders why these actors are portraying their newfound love for Hinduism. Considering the film’s blatant Hindu-centricity, one wonders what’s behind the change. It has been a gradual but deliberate change by the Bollywood gang in order to protect their livelihoods. Ultimately, it’s business for them, without any consideration of Hindu concerns.

The plot of Brahmastra was conceptualized some years ago, where Ranbir was originally to play a character inspired by Rumi. So how did Rumi suddenly transform into Shiva? It is nothing but hogwash by the filmmakers to associate themselves with Hindu culture by spreading outright falsehoods. Rumi, a Sufi poet, was the inspiration for the movie’s original plot. What these Sufi poets and preachers preached is well known. Propagation of vicious Shariah laws disguised in sweet, romanticized, and amiable stories and songs, all to divert attention from the hardcore violent realities of Islam. A concept in opposition to Hindu beliefs, Monotheism or Tauheed, was promoted by Rumi.

A movie based on Rumi’s works, originally called Dragon, is now called Brahmastra. What is the reason for this sudden affinity for traditional Hindu symbols? It is also crucial to realize that by changing the names of the lead actors, one cannot fool the audience. There’s no fooling when it comes to Urdu words laced throughout the songs in the film, such as Ishq, Khair, Husn, Mausam, Fikr, etc. in Kesariya.

Karan Johar’s overconfidence and lack of appreciation in his interview illustrate his contempt for Indian audiences. The brazenness stems from a sense of entitlement and excess wealth, which he enjoys because of the hard-earned money of cinemagoers. The audience must understand that these Urduwoodians hate and despise them. The reason for his open call to boycott Brahmastra is their bulging coffers and overconfidence.

Due to its inability to understand and connect with on-ground realities, Bollywood’s entire ecosystem is a failure. These Bollywood professionals live in a cocoon, oblivious to the needs of ordinary people, a disconnect reflected in their conversations and movies, eventually. Arjun Kapoor and Karan Johar’s recent frustration over boycott calls is a clear example of this. Clearly, the Bollywood industry is lacking in self-awareness and understanding of its roots and true identity. Muslims have the advantage here since they are not just aware of their roots but also of their goals. While Muslims have framed their ideology clearly and simply, Hindus have taken the mantle of defending secularism. Sadly, Hindu filmmakers are conveniently unaware of their roots and past struggles, while Muslim actors and writers are able to exploit false victim stories.

Thousands of Pakistanis came into India as refugees and have had a significant influence on Bollywood. Numerous actors, producers, and directors have their roots in Pakistan, such as Kapoors, Chopras, and Dutts. They are trying to create an atmosphere here that their ancestors fled from Pakistan, which is ironic. Bollywood is popularly known as the Hindi industry, but nothing could be further from the truth. Urduwoodians are not only embarrassed and hesitant to interact in Hindi but there is a marked Hindi disconnect as well. Bollywood celebrities display an elitist and classist style that does not reflect respect for the language. The promotion of Islamic practices in an attempt to display their secular credentials by demeaning Hindus is nothing new. In order to demonstrate their open-mindedness, they will eat beef or visit Dargahs at any cost. This is all part of their freedom of expression, but when audiences do the same, they are mocked and labeled as trolls.

The leftist ecosystem has degenerated the entire Bollywood industry and created social unrest and cultural degradation. Hindus have gathered as a force to be reckoned with, and this momentum should not be lost. In the end, it is the Hindus who should decide what happens to Brahmastra. Hindus should not fall victim to the fallacious marketing campaign for the movie and understand the deceptive ploy involved. Unless Urduwood celebrities respect their audience and treat them with dignity, they’ll have to face the consequences of their arrogance.