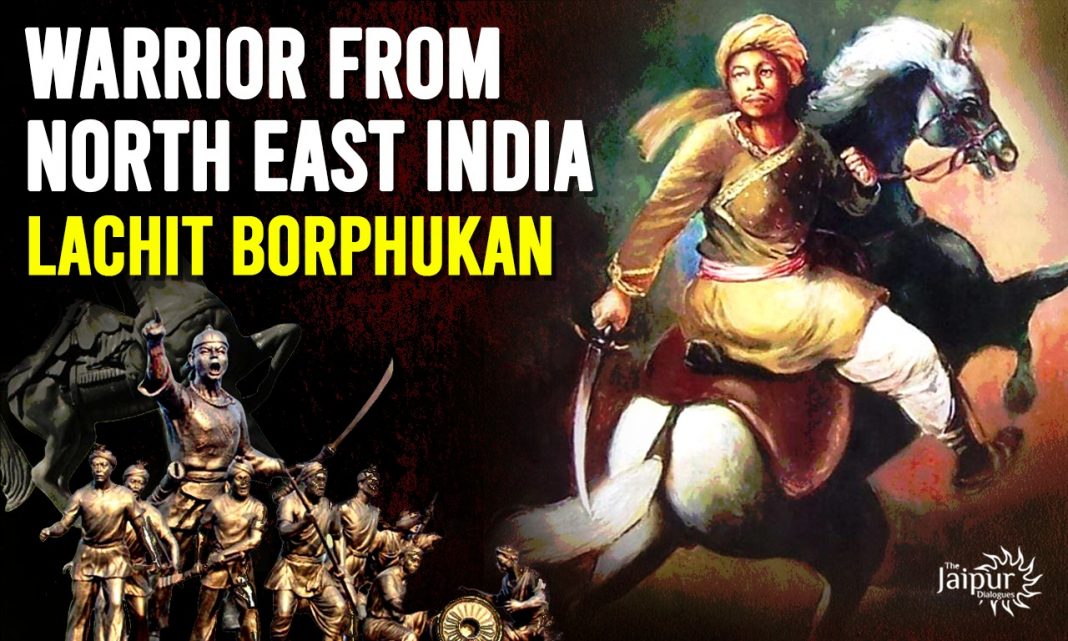 Lachit Borphukan was not only an outstanding and an astute soldier, but a true son of the soil. He displayed valor and grit against the tyrannical Mughal army and protected his motherland, despite odds.

Since time immemorial, Bharatvarsha has been a land of warriors. Whenever the need arose, the brave sons of the soil defended their motherland. The land has produced great sons including Chhatrapati Shivaji Maharaj, Guru Teg Bahadur, and countless others. Those with vested interests have attacked Bharat, not only for its wealth but to forcefully establish their faith. The fierce and fearless warrior Lachit Borphukan foiled the evil designs of the barbaric Mughals. Thee Ahom king Prataap Singha appointed Lachit as commander of the Ahom army.

Background of the Relationship between Ahoms and Mughals

The Ahom kingdom dominated Assam and North-East India and successfully repelled the Mughal army’s attacks. Aurangzeb was a ruthless ruler who treacherously expanded his territory throughout India. Clearly, he was a fanatic Islamist whose sole purpose was to disturb Hindus by imposing Jizya, destroying temples, torturing Hindu women, etc. Ahoms and the Mughal Empire had a long history of animosity. Ahoms had a decisive victory in the battle of Itakhuli in 1682 when the Mughal Army attacked the Ahom Kingdom. This led to a Mughal retreat. One of the main reasons is their alliance with the Koch Behar kingdom, as well as Mughal imperialism’s expansionist intentions in the North East, starting with Assam. Mughals considered the territory east of Barnadi up to Singri to be part of their empire. By 1615, the Mughals entered Assam via Kajali, which turned out to be a disaster for them. After reuniting after losing an initial battle, the Ahoms defeated the Mughals and retook the area. Under Shahjahan, the conflict resumed after a brief pause.

Ahom king granted asylum to the hill chiefs of Dhanikal, who fled from the tyrannical Bengal subedar Qasim Khan Chisti. The Mughals eventually captured Kamrup in December 1636, but the residents of Samdhara fort displayed brave resistance. Asurar Ali Treaty between Momai Tamuli and Allah Yar (1639), put the entire Western Assam, up until Guwahati under Mughals. Shahjahan eventually fell ill, and his sons engaged in a bloody succession war. By taking advantage of the situation, Ahom king Jayadhwaj Singha was able to recapture Western Assam.

Momai Tamuli came from humble origins and was noticed by Pratap Singha. As a result of his hard work, Singha appointed him as Bar Tamuli, or the superintendent of the Royal Gardens. Tamuli’s real name is Sukuti; his later name comes from the position he held, i.e. Tamuli. Moreover, the name Momai means maternal uncle in Assamese. Due to his bravery and foresight, he became a prominent figure during the Mughal wars.

He also played an influential role in the Treaty of Asurar Ali, that a Mughal envoy remarked, “If the Ahom ruler is a veritable Mahadeva, Momai Tamuli is his Nandi, and with them together, it is impossible to conquer that land”. Tamuli played a key role in Ahom’s administration and governance. Lachit Borphukan, a fierce and young warrior was born to Momai Tamuli. Saraighat was one of the most notable naval battles in Indian history. A war was fought on the banks of the Brahmaputra in Guwahati. Having an expert understanding of strategy, the Ahom king chose Lachit Borphukhan to be Commander-In-Chief. Lachit Borphukan was well acquainted with the area’s geography and knew how to take advantage of it. Using tactics like guerilla warfare and clever use of local geography, Lachit won a battle they were expected to lose. Highlights of the battle are as follows:

The Mughals got bogged down in mud and got isolated from each other due to flowing streams. The Ahoms were at an advantage. They were more used to the terrain and accustomed to the climate. They carried out extensive guerilla warfare, causing heavy losses to the Mughals. Ram Singh was very contemptuous of these operations and called it a “thieves affair”. He challenged Lachit Barphukan to a duel. He also offered a bribe of 3 lakhs to Lachit to abandon Guwahati defences. When this did not work, he tried a ruse.

An arrow was hosted into the Ahom camp with a letter addressed to Lachit, attached to it. According to the arrow, Lachit was given one lakh to evacuate Guwahati as quickly as possible. When the letter reached the Ahom King of Gargaon, he became suspicious of Lachit Barphukan’s loyalty. Fortunately, the Prime Minister realized it was a Mughal conspiracy and convinced the King it was a ruse to cast doubt on Lachit’s loyalty. Nevertheless, the King developed doubt and insisted Lachit come out of his defenses and fight the Mughals publicly. Lachit was forced to follow the King’s order despite his objections to the suicidal act. In an open battle on the Allaboi plains, Lachit came out of his defenses and attacked the Mughal army. It was the fourth phase of the battle.

Ahoms successfully resisted frequent attacks on their motherland from Muhammad Ghori’s time, which totaled as many as seventeen invasions. Lachit, unfortunately, became very sick during a crucial stage of the battle. Doctors advised him to stay off the battlefield. As the Mughal army advanced and Lachit’s health declined, the warriors of the Ahom army became discouraged and disenchanted. Considering the situation, Lachit realized that protecting his people was more critical than his health. In lieu of the above, he said:

“When my countrymen are suffering from invasion, and when my army is fighting and sacrificing its life, how can I think about resting my body due to a mere illness? How can I think about going home to my wife and children when my entire country is in trouble?”

Borphukhan knew that fighting on land would be difficult and challenging. Thus, he asked for seven boats to be brought to him loaded with bows and arrows. After that, he prepared for war from the riverfront.

Lachit had dug a defensive line at the back of the advancing army as a tactical move. Strategically, this was intended to be there as a fallback in case of emergency. As a result, the Mughal army faced an onslaught of sudden attacks along with the charging Ahom warriors. These warriors were inspired by valiant Lachit and fought bravely till their last breath. Having been defeated and having suffered massive casualties, the heavily disoriented and beleaguered Mughal army ended up retreating.

It is essential for everyone in today’s world to acknowledge and value the bravery of individuals like Lachit Borphukan. Warriors like him are the reason we have our freedom. It’s unfortunate that many folks in today’s world are unaware of his sacrifices. Lachit not only fought valiantly against the tyrannical Mughals, but also played an important role in defending the Sanatan Dharma. Assam and other Northeastern states owe a lot to fighters like Lachit. The awarding of the Lachit Borphukan gold medal to the best graduating cadet at the National Defence Academy, instituted by the Assam Government in 2000, is a proud step. It is a fitting tribute to a valiant soldier and a brilliant tactician, inspiring youngsters today to emulate his footsteps. Its time his story his majorly highlighted and brought to the fore, often.