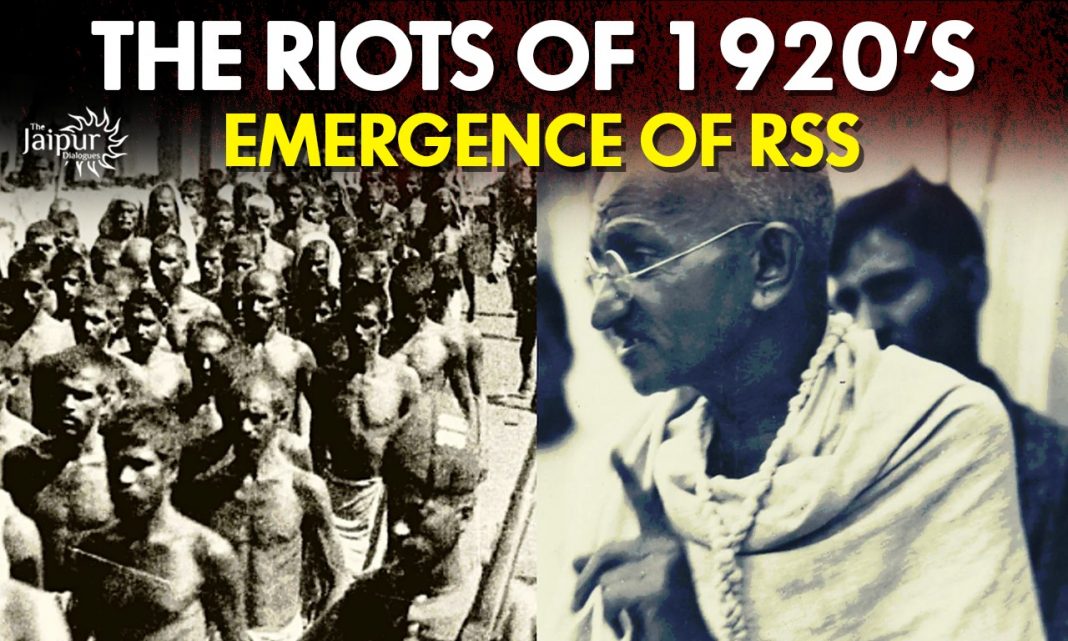 The history of Muslims attacking Hindus has been going on since centuries. How RSS was formed in the wake of these attacks forms an integral part of Hindu history, one which should be known by all.

Pre-independence, India was in turmoil. So, the polarizing politics played by the likes of Mohandas Karamchand Gandhi, Jawaharlal Nehru, and others in favor of Muslims were deliberate attempts to create polarization and keep Hindus on the back foot. In 1920, our Great ‘Bapu’ started the Non-cooperation movement in India to overthrow the British Empire, and rightfully so, he is the person who has been attributed the responsibility for creating a so-called secular society based on fabricated ideals. In his utopian world, he conjured up the irrational idea of supporting the Khilafat Movement to gain the trust and faith of Muslims of the Indian subcontinent, which actually did not work and ultimately proved to be a failure. Even though he understood the on-ground reality of Hindu-Muslim differences and how Hindus wanted Poorna Swaraj and Muslims the establishment of an Islamic caliphate in India, he believed in the concept of Hindu-Muslim unity. As a result of Gandhi’s deliberate naiveté, not only did he make Hindus pay for his miscalculated move but he also allowed Muslims to exploit their victim status in order to foist their intolerance upon the nation.

Gandhi lived in his utopian dystopia in which he believed Hindus and Muslims were brethren and could advance the non-cooperation movement. But then the Moplah uprising took place, which was called a revolt of peasants, in reality, was a massacre perpetrated by the fanatic Islamists on the local Hindu population, which occurred in the Malabar region of India. Gandhi was forced to break from his illusions after the Hindu Genocide, resulting in the cancellation of the Non-cooperation movement.

Every dark cloud has a silver lining, it is said. Ultimately, this led to the creation of the RSS (Rashtriya Swayamsevak Sangh) by Dr.Hedgewar. Prior to the Non-cooperation movement, Hedgewar was an active member and contributor of the Congress party. He also participated in the Anushilan Samiti movement against the colonial rule, for which he was arrested several times. Veer Savarkar and Bal Gangadhar Tilak had a profound impact on Hedgewar, but he was severely disappointed in the later position of the Congress Party, which espoused forced Hindu-Muslim unity. This led to his departure from the party and his pursuit of creating an organization that would promote national growth, peace, and stability, along with standing for national unity, which led him to lay the foundation stone for RSS in Nagpur.

As Muslims displayed their brazen attitude of intolerance along with violence and displays of dominance, the RSS became increasingly influential in Indian politics. Hindus, who had been made weak and meek by Gandhi, Nehru, and others of their kind, found a voice in the RSS. It was in 1923, when Hindus celebrated Lakshmi Pujan and led a joyful procession accompanied by drumming and dancing. En route they passed a mosque, where the local intolerant Muslim youth were angered by the sounds of Bhajans and attacked the people leading the procession. It was a brutal attack where some of the victims were grievously injured and others succumbed to their injuries… All for the sake of secularism in India!! Hard-line Islamists were responsible for this massacre, which led Hedgewar to take a decisive action.

In contrast to the Muslims who always stood united, despite internal differences, Dr. Hedgewar was concerned about the lack of unity and cohesion among Hindus. Throughout history, Hindus have faced multiple differences in castes, religions, beliefs, etc., which has made them vulnerable to attacks by Muslims, despite being the majority. The Hindu population had been a majority in Nagpur. Yet, they were brazenly attacked by the Muslim goons who knew the Hindus would never retaliate, and that is what strengthened their vicious attacks on Hindus.

Following this incident, Dr. Hedgewar decided to create an organization that would act as a catalyst for Hindu unity, and after much deliberation, the RSS was established in 1925. To train Hindus and bind them together as one unit, he opened RSS Shakhas in every locality of Nagpur. RSS attracted local, energetic and keen Hindu youth, who practiced self-defense techniques with each other regardless of their internal differences. Within two years of RSS Shakhas’ establishment, the organization grew rapidly.

To challenge the Islamic dominance, Dr. Hedgewar led a celebration of Lakshmi Puja in Nagpur’s Mahal area on 4th September 1927 with 100 swayamsewaks. Muslims once again showed their defiance by refusing to let the procession through. Following the event, when Hindus were resting in their homes during the noon-hours, Muslim rioters came out shouting Allahu-Akbar chants on the streets of Nagpur, armed with weapons like daggers, javelins, knives, etc. Even Dr. Hedgewar’s house was attacked by the Muslim goons while he was out of Nagpur that day. After such brutal attacks, the RSS workers began attacking the savage Muslim mobs in retaliation armed with lathis while the latter was ill-prepared for the response. As a result, there was an intense situation of riots, and the Muslims who were now facing defeat were successfully routed, causing them to flee the city.

A new chapter in India’s history began with this act of defiance by the RSS swayamsewaks. The Hindu community was not only buoyed with renewed hope and vigor, but they also gained a collective identity to fight against the Muslim dominance by reclaiming what was rightfully theirs. Yet that was just the beginning as envisioned by Dr. Hedgewar, the problem that still afflicts Hindus today is that of being a true-blood secular and this disease has ravaged countless Hindus over the decades and continues to do so. The situation hasn’t changed on the ground, and it won’t change until Hindus learn the value of collective unity and become stronger in their fight against their enemies. Recent attacks by the frenzied Muslim mob on the Hindus in Begusarai (Bihar) on the eve of Holi further prove that little has changed on the ground and this fanatical Islamist mob will persist in exterminating the Kafirs until they are abolished entirely from the face of the earth. This is an alarming situation and Hindus should get out of their merry world and face the reality.