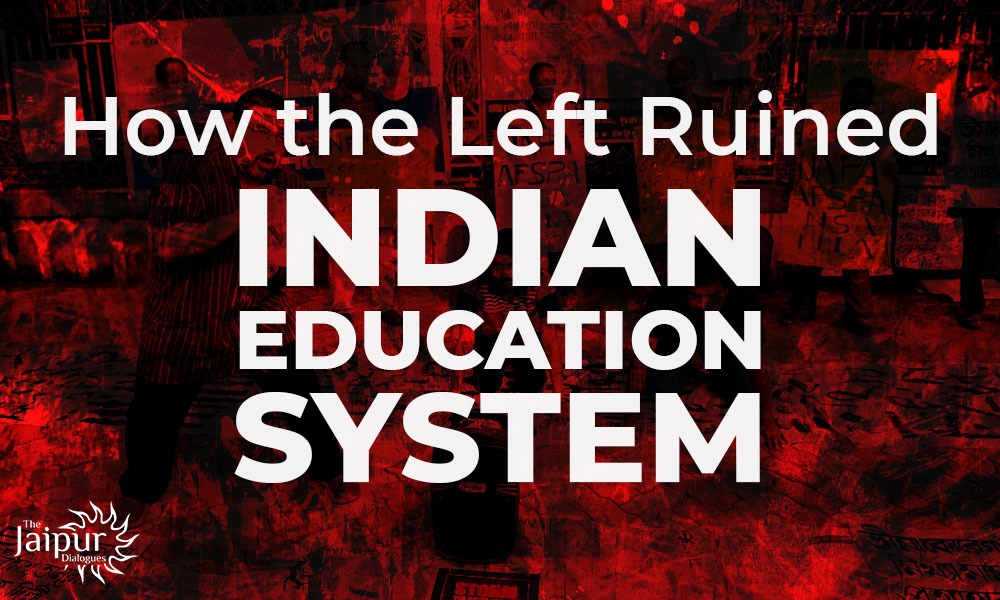 Leftists have systematically weakened our Indian education system by promoting falsehood. Such ill-designed deliberate practices have created a negative resounding impact on successive generations and this needs to be rectified, immediately.

Leftist ideology has profoundly affected our Indian education system and has contributed to the current state of affairs in the country. It’s no surprise that India is producing secularists day after day. Left-wing ideology’s promotion of Communist policies despite their flaws has led to a distorted view amongst youth. Our educational system is flawed and biased, and it fosters rote learning over analytical thinking. It is unfortunate that the cognitive abilities of the children have been suppressed by an intentional design. As a result of deep patronage and support from the civil society, the leftist lobby possesses overwhelming power. Thus, they have built up extensive sway in academia, and employ a viciously intolerant attitude towards different viewpoints.

Sanjeev Sanyal states, “The Left dominance over the intellectual establishment has its roots in the systematic ‘ethnic cleansing’ of all non-Left thinkers since the 1950s…the result of the systematic cleansing was that there were no non-Left academics remaining in the social sciences field in India by the early 1990s.”

Across India, leftists dominate major educational institutions, with notable examples being JNU, Jadavpur University, Osmania University, and AMU. Systematic erasure of contrary views has become a hallmark of the left-dominated world. This promoted liberal notion is a hoax, as leftists won’t accept any dissent. The erasure of old Hindu texts and the glorifying of Islamic and Christian brutality are examples of the same phenomenon.

It’s truly disheartening that these self-declared intellectuals have trampled over our traditional and progressive cultural practices. Who in our time has heard of Thiruvalluvar’s Kural or Shanti Parva from Mahabharat? The sad truth is that there are only a few people who realize such invaluable ancient texts exist. As per Dr. Abhay Firodia, “We have veered extremely toward the leftist and jettisoned our cultural values. The history taught today is malicious, synthetic and fabricated, which is trying to break our affinity to our land, destroy our confidence and make us hate ourselves. Conservative thought should reach all university students through this book as it presents a well reasoned and non-violent counterpoint.” These ideologically motivated exclusions produce stark results. It leads to unequal representation as well as a skewed perspective. Whether at Jadavpur, AMU, or JNU, it is important to listen to the voices of the students. What makes this the case? This is due to their open embrace of political violence in the name of Islam, freedom of speech, or Leftist extremism. They are those who use half-truths and innuendos about any national development activity to instigate communal tension in order to fulfill their political agendas.

Everyone knows how well our school curriculum is designed. A unique kind of exaltation has been conferred upon the oppressive British colonial rulers and the barbarian Mughals. Sanatani practices are made to seem intentionally weak and inferior in comparison with these plunderers because of a whitewashed history. NCERT’s history books were cleverly manipulated to distort our understanding of our proud history and society by their design. As a result, successive generations of Hindus have become brainwashed and debased. Leftist historians such as Romila Thapar, Irfan Habib, Yogendra Yadav, etc., have designed the NCERTs. Regardless of how much these historians try to paint a rosy picture, the truth can’t and shouldn’t be forgotten. The Mughal barbarian rulers starting from Babar to Aurangzeb plundered national wealth, raped and killed Hindu women, razed Hindu temples, and tried to eradicate Hinduism. We are taught that Mughal rulers like Aurangzeb and Shahjahan gave grants to maintain and repair Hindu temples which were demolished during wars by NCERT historians. The question is, in which wars were temples destroyed? The Hindu temples were destroyed as part of the so-called wars waged by the Muslim rulers against the Kafirs.

Here is an excerpt detailing the same “All Mughal emperors gave grants to support the building and maintenance of places of worship. Even when temples were destroyed during war, grants were later issued for their repair – as we know from the reigns of Shah Jahan and Aurangzeb”, as written in the Part II of NCERT’s Theme of Indian History textbook’s page 234.

Sadly, the minds of young children are poisoned from a very early age. In turn, they have become catalysts for the propagation of leftist ideologies. Textbooks prepared by communists to spread propaganda have no evidence to support their claims. Books like this portray the rapacious and barbaric Mughals as tolerant and big-hearted rulers who liberated Hindus from the oppressive rule of the tyrannical Hindu Kings.

Patriotism related to constitution isn’t an absolute moral philosophy that exists in silos—rather lies in conjunction with Indian Constitution. Truth be told, that our Constitution by design is not that liberal as falsely promoted by our “leftist liberals”. There are feasible restrictions on absolute freedom of speech. Though, our favorite Indian liberals continuously rant as per their convenience and present a façade of being constitutionally patriotic.

The perverse ideology and bias of Macaulay are systematically embedded in left-influenced education. In the name of promoting elite education, Marxists continue to dominate the education system. The position stands in opposition to what communism actually preaches, but who is to counter it? Our traditional knowledge and cultural systems continue to be criticized by left-leaning intellectuals. This is a trend affecting western nations, too. It is past time to liberate future generations from the clutches of Nehruvian-Marxist education policy. The damage caused by a flawed education system and methodology has already resulted in a generation that is ultra-secular and liberal. Not only it has weakened our Sanatani principles and values, but it has also put Hindus on the defensive. The Central Government must immediately correct the syllabus, which has been pending for long. If corrective measures are not taken immediately, it does not bode well for our future, and that is the reality.