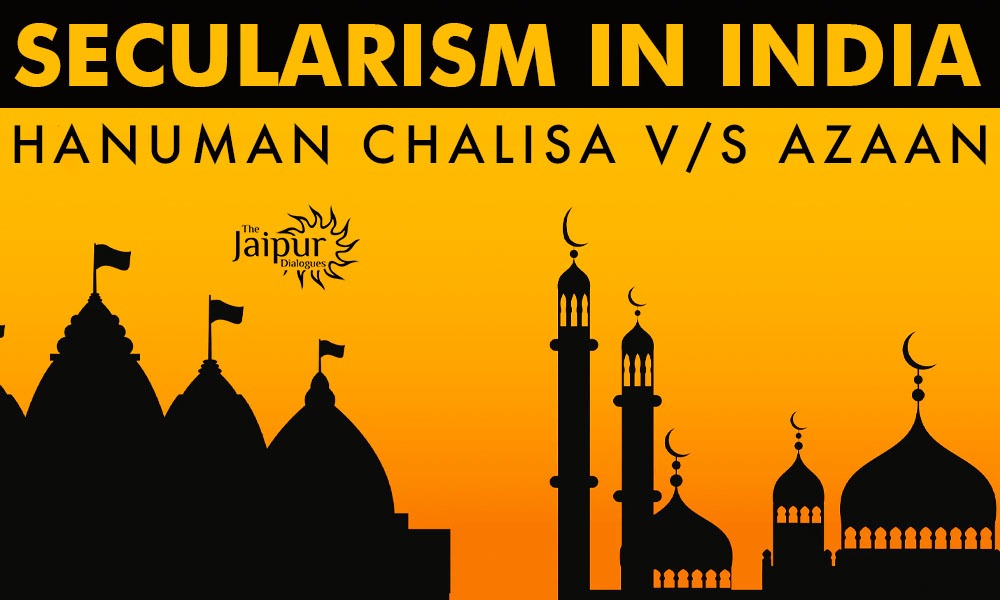 Let’s examine the history of Indian secularism. By enacting the 42nd amendment in 1976, ‘secularism’ was inserted into the Indian constitution with deliberate intent. The Preamble of the Indian Constitution affirms India’s secular character. In 1994, however, the Supreme Court of India ruled in S.R. Bommai v. Union of India that India was a secular state since its formation.

Throughout Indian history, secularism has been a part of Indian ethos, be it under Ashoka or Harsha, who ruled 2000 and 1400 years ago, respectively. Under the ruler’s patronage, ancient Indians were free to follow any religion, whether it be Hinduism, Buddhism, or Jainism.

There should not be honour of one’s own (religious) sect and condemnation of others without any grounds.

Isn’t it strange that Indians, especially Hindus, are being characterized as intolerant and non-secular today? Bhartiyas, who practiced secularism and inclusivity before the advent of Abrahamic religions, don’t need education from the West. The oppressed have been portrayed as oppressors and intolerant by people with vested interests. ‘Secularism’ is the weapon of choice for propagating victimhood. In India, secularism has become a threat to Hindu existence and identity. In the name of secularism, these so-called minorities perpetuate hate, violence, conversion, etc.

In order to create a successful vote lobby, politicians used secularism to divide voters and create divisions. By virtue of secularism, Hindus have been made gullible and have been divided into factional societies. Freedom of religion is a fundamental right in India, guaranteed by Article 25-28. But, we all know and understand the truth about the Hindus’ freedom of religion.

Currently, Hindus in India are treated as pariahs and are targeted and harassed for practicing their religion. Hindus do not bother others deliberately, unlike those from the peaceful mazhab.

Muslims indulge in blatant violation of the Supreme Court verdict. The SC had banned the use of loudspeakers and music systems in public places between 10 p.m. and 6 a.m. (except in cases of public emergencies) in July 2005, citing the serious effects of noise pollution on the health of those who live in such areas.

Islamic Shariah laws are the only ones followed or believed by Islamists, not the law of the land. Fanatical Islamists believe in imposing their own belief systems, countering the same Raj Thackeray announced public recital of Hanuman Chalisa. Evidently, this didn’t sit well with the self-declared secularists aka Maha Vikas Aghadi.

Clearly, Shree Balasaheb Thackeray’s ‘Shiv Sena’ has strayed from the path he envisioned and carved. The Maharashtra government received an “ultimatum” from Raj Thackeray to remove loudspeakers from mosques by 3rd May. Hanuman Chalisa would be sung in front of mosques if the demands weren’t met. Raj Thackeray embraces the same views of Hindutva that Uddhav Thackeray has abandoned to further his political ambitions.

Following the protest at Matoshree, independent MLA Ravi Rana and MP Navneet Rana were arrested. Mumbai police arrested them and the Mumbai High Court has not quashed their FIR.     Dismissing the plea, the court said: “Such a declaration that a person would recite some religious verses either in the personal residence of another person or even at a public place is certainly firstly a breach of personal liberty of another person…”

“…Secondly, if a declaration is made that a particular religious verse will be recited on public streets, the state is justified in carrying apprehension that such act would result in disturbance to law and order,” the judges marked.

In light of the above judgment, it is vital that all those who block highways and railroads are arrested. Why isn’t the law the same for everyone? In Barabanki, why were the namazis who prayed openly at an HDFC bank branch not arrested? Don’t those actions violate the personal liberty of others who don’t believe in Islam? Moreover, NCP leaders held a pooja at a Hanuman temple, but is it possible to organize poojas at mosques? Secular society will be in danger and minority existence at risk if the latter happens. Apologists and sympathizers of Islam have found gullible targets in Hindus, who are made escape-goats to fulfill their perverse desires.

Hindus are awakening and this blatant appeasement has to end. Political opportunists need to realize this. Hindus are realizing their collective identity, and hence their unity should strengthen even further from here. There is a time for Hindus to assert more than their political identity; the awakening of Hindus will force others to re-examine their strategies. It’s time for a well-planned Hindu Renaissance, which would be perfect for rediscovering their lost identity.