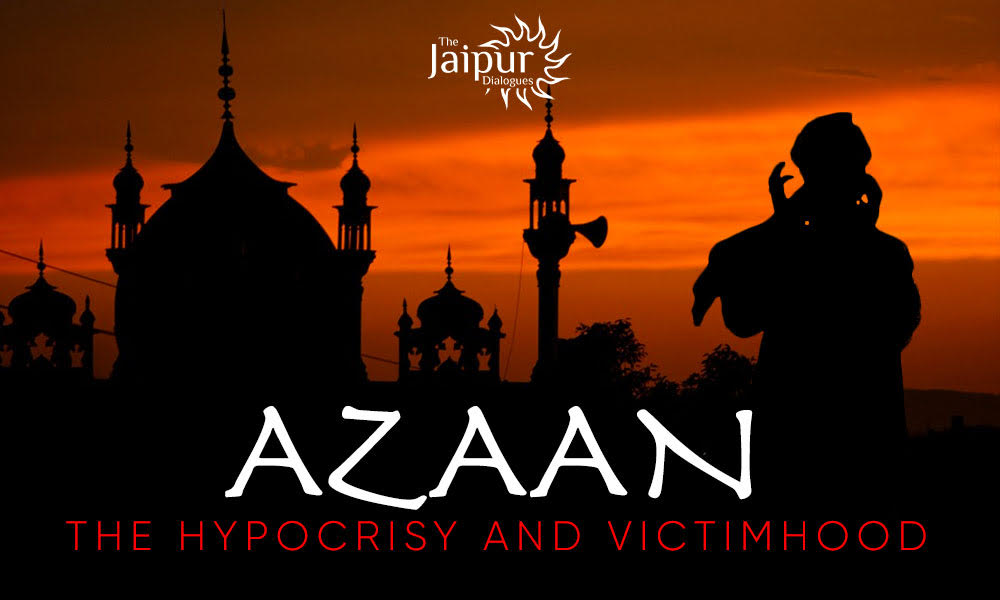 The loud blaring noises from the loudspeaker due to Azaan, aren’t only disruptive but infringe on others privacy. This practice of deliberate imposition of one’s beliefs on others must cease, immediately.

Azaan’s sound at odd hours is not only troublesome, and irritating but also an intrusion into another’s privacy. So-called minorities have crossed the lines of basic humanity and tolerance as a result of India’s forced secular politics. Due to unhindered minority appeasement, they have had unequal access to both our nation’s resources and general laws. Azaan isn’t just about making loud noise and causing hindrance, it is also about the imposition of Islamic laws upon others. How can this be considered an imposition? Because Azaan clearly means;

For the pre-dawn (fajr) prayer, the following phrase is inserted after the fifth part above, towards the end:

The Azaan and what it entails

Clearly, Muslims believe in no god except Allah and promote this belief by blaring loudspeakers atop Masjids. Do you not think this is a flagrant violation of other people’s religious beliefs? Can we forget the whole hullaballoo regarding secularism? Isn’t that in danger? However, the answer is no, since it’s Hindus, Jains, Sikhs, Buddhists, etc. that are troubled.

For decades, Muslims are working on an agenda, i.e. to trouble Kafirs and this has been explicitly mentioned in Quran:

Quran 71:26 And Noah said, “Lord, do not leave one family of Kafirs alive on earth. Because if you do, then they will trick your servants and will only breed more sinners and Kafirs.

A quick history lesson: loudspeakers were introduced for public in 1876 and Islam is traced back to the 7th century. The question is, based on the claims of various fanatic Islamists, why is a loudspeaker necessary? Muslims used to pray five times a day before 1876, so why do they need a call now?

So what is Azaan? Azaan is the Muslim call to prayer, made five times a day from a mosque, for believers to join the congregational prayer. Prophet Muhammad instituted this practice after he migrated to Medina, and built a mosque there. As to the method of calling people to the mosque for the five periodic prayers, he deliberated the issue with his companions. Some suggested ringing a bell, some blowing a horn, and some lighting a fire. But, under divine inspiration, the Prophet decided on the human voice, and chose a manumitted Black slave, Bilal, for making the call. (Ref.-Najmul Hoda)

It would be helpful for the Muslims, to conduct an honest self-reflection. The entire Muslim community globally has made the loudspeakers, symbolic of their religious practice of Azaan. The loudspeakers can be termed as a disreputable innovation, and such an innovation is called Bid’at-e-Sai’yya— that is, an innovation which distorts the religion.

Muslims have always played the minority card, despite SC prohibiting Azaan or any loud sound beyond permissible limits. The Supreme Court too dealt with the issue of use of loudspeakers for religious purpose in 2007 in the case of Church of God (Full Gospel) in India V/s. K.K.R. Majestic. It said, “There is no fundamental right to use loudspeakers or similar instruments under article 19(1) (a) of the Constitution. On the contrary, the use of such instruments contrary to the Noise Pollution Rules will be a violation of fundamental rights of citizens under Article 21 of the Constitution as well as fundamental right of citizens of not being forced to listen to something which they do not desire to listen.”

“No religion or religious sect can claim that the use of loudspeakers or similar instruments for prayers or for worship or for celebrating religious festivals is an essential part of the religion which is protected under Article 25.”

Again, in May 2020, the court reiterated its legal stance regarding the use of loudspeakers in Azaan.
“Azaan may be an essential and integral part of Islam but recitation of Azaan through loud-speakers or other sound amplifying devices cannot be said to be an integral part of the religion warranting protection of the fundamental right enshrined under Article 25 of the Constitution of India, which is even otherwise subject to public order, morality or health and to other provisions of part III of the Constitution of India. Thus, it cannot be said that a citizen should be coerced to hear anything which he does not like or which he does not require since it amounts to taking away the fundamental right of other persons.”

Doesn’t it astonish that an entire religious community requires the use of loudspeakers to call Muslims to prayer? The Namaazis say they are devout Muslims, but do they not know the time when to pray? Today, when everyone carries a mobile phone and a watch around, how can one

not keep track of time? Speaking the truth, loudspeakers serve as a symbol of superiority and disrespect for the law.

If there was only sporadically blaring noise, it would have been tolerable. It has become a habit for some to display their self-imposed religious beliefs, which has become a source of annoyance for many. Azaan is not only detrimental to sleep but also disturbs productivity levels due to frequent interruptions.

Despite being an officially secular nation, India’s secularism stems from an infringement on the rights of the majority. Neither the ethical public realm nor social harmony has ever been a concern for the so-called Dara Hua Musalmaan. Muslims behave in this manner as they have an exclusive allegiance to Allah and their Quranic beliefs. Azaan calls made over loudspeakers disturb air quality and are in violation of the Noise Pollution Rules, 2000. Azaan calls were earlier made by a human, as loudspeakers were considered Shaitaani voices until 1970. How did suddenly loudspeakers have become Halal instead of Haram? It’s because Muslims tend to change their modus-operandi according to their convenience and agenda, creating unnecessary complications for others.

There are many different sects/religions in India. It is everyone’s prerogative to maintain their privacy and not disturb others. In order for secularism to succeed, all communities must take responsibility, rather than complain about victimization. Even after being tortured and humiliated for centuries, Hindus have always been treated like easy scapegoats. The issue of loud noise from speakers has been resolved amicably by C.M. Yogi without any communal discontent. This is how exactly it should be panned out countrywide. A certain minority in India needs to stop perpetuating this hoax of victimization. Furthermore, they must be more tolerant, respectful, and uphold the laws of society. For long, Hindus have been marginalized, but it should stop because this is counterproductive to a society that values equality.