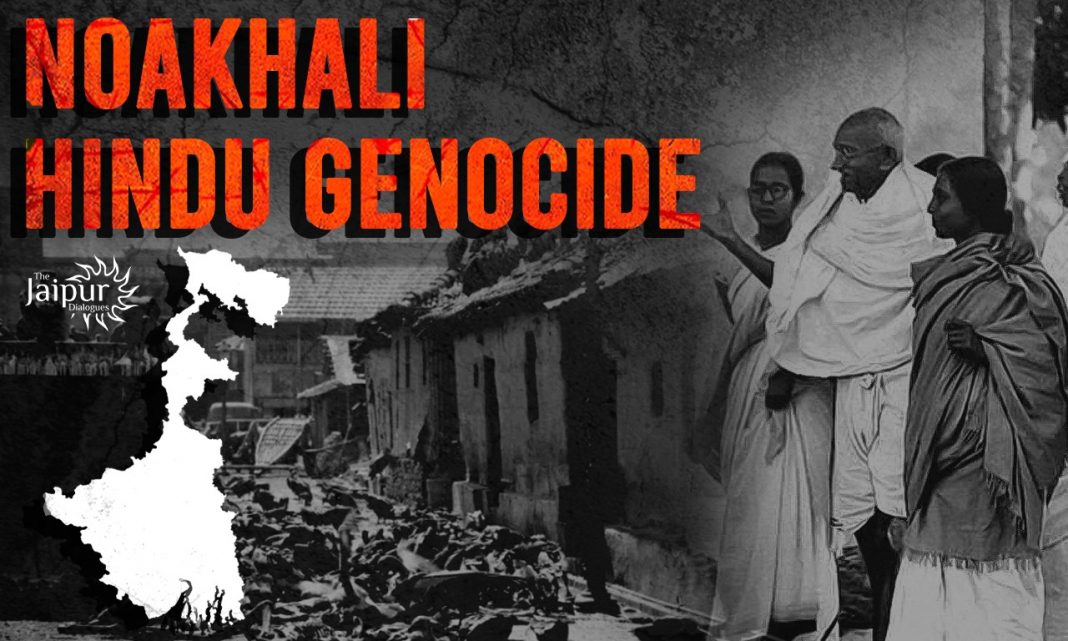 The Noakhali Hindu Genocide was a spine-chilling incident, one which has been relegated to the dark corners in the chapters of Indian history. It is time that pages are shuffled and people be told about the brutal atrocities undertaken by the Islamic fundamentalists against the Hindus.

Hindus have historically been the victims of oppression, both in their homeland and abroad. Abrahamics have deliberately targeted Hindus for centuries and it isn’t a recent phenomenon. Muslims consider Hindus to be Kafirs, and if they don’t convert, they ought to die, just as Christians have outright targeted Hindus and trapped them in their covert agenda of conversion. Being a religious minority, Hindus have faced brutal and horrendous communal violence from every quarter, yet they remain a pariah for the international community.

Hindus have unfortunately been subjected to barbaric attacks far beyond their geographical borders. The attacks have also taken place on Indian soil, which is shameful. Genocide of the magnitude of Kashmir is only the tip of the iceberg; there is a long list of such dark chapters in Indian history that have purposefully been kept hidden by the religious bigots, pseudo-left intelligentsia, and previous government regimes with their own covert agendas. Throughout history, Hindus have been attacked numerous times, not only in an attempt to break their unity but to wipe out their existence in its entirety. As a result of the deliberate efforts made in the past to paint history in a negative light, a large number of people today are blind to the real face of these fanatical and hard-line Abrahamics. Secularism has created a veil that does not allow Hindus to see the harsh reality, a reality full of blood-curdling incidents and gory details.

Noakhali ‘s genocide was similarly grotesque and spine-chilling as if it was a déjà vu for the Kashmir Genocide in 1990-1991. Noakhali, now in Bangladesh, has been relegated to a tiny dot in their geographical territory and to imagine what these barbarian and blood-thirsty Islamic hardliners are still capable of, the recent attack on the ISCKON temple in Bangladesh is a grim reminder. Hindus have been targeted time and time again because they believe in peaceful co-existence, something that has made them cowards in the eyes of fundamental Islamists; a community that doesn’t have a voice of its own… But who is to blame here? The earlier political regimes that kept Hindus outside the scope of justice and made them inherently weak, so that they were vulnerable to continuous attacks.

An unimaginable event occurred in Noakhali on 10 October 1946, as Islamic barbarians slaughtered Hindus in order to purge the area of all Hindus. It was the day of Kojagari Lakshmi Puja, a Bengali Hindu festival intended to seek blessings from the goddess of health and wealth. The so-called peacefuls’ were as usual agitated by this and started attacking the fishermen in Ramganj (this same attitude of intolerance is displayed brazenly, today as well). The very next day, these peacefuls’ reached the doorstep of Noakhali Bar Association’s President Rajendralal Roychowdhury. He was brutally attacked by a self-proclaimed army of local terrorists known as the MIYAR FAUJ, under the command of the local politician Gholam Sarwar Husseini and a Muslim goon Kasem.

Rather than bow to their demands, Roychowdhary chose to fight against them (the mode of operation of Islamic fundamentalists is the same whether they are in Kashmir, Afghanistan, or Noakhali). Armed only with his rifle and whatever weapons he could find, he waged a lone battle from his terrace. Although he fought with the might of a lion, the clan of hyenas managed to defeat a single warrior. Unfortunately, Rajendralal lost the next day, at which point the brutal Islamists stormed into his home and butchered his entire family, with the exception of his two daughters who were treated as trophies (like women under the Taliban or under ISIS rule); meanwhile, Roychowdhary’s severed head was presented to Gholam on a plate. Islam thrives on this semblance of brutality.

Thousands of Bengali Hindus were forced to leave their homes penniless or were forced to convert, in addition to thousands of women who were raped, beaten, tortured, and killed. But when Hindus chose to retaliate with uprisings in Bihar, the drama of conducting and maintaining sham peace was started by our very own ‘Bapu’, who chose to remain silent and a convenient mute spectator when the Islamists unleashed their monstrosity but initiated the drama of ‘fast-unto-death’ when Hindus started replying back to the Muslims, in the language they understood. Gandhi’s supposed secular credentials can be determined simply from the position he took on the issue.

Hindus have always been the focus of these ethnic attacks; otherwise one cannot explain the massive population drop of 20% in Hindus from the 1940s to the present day in Bangladesh (it dropped from 28% to 8%). In Pakistan, Hindu families have been targeted and massacred, young Hindu girls have been forcedly abducted, raped, and killed. Even in Afghanistan, Hindus, Buddhists, and Sikhs, once influential groups, have been forced to flee as refugees under the Taliban regime.

Hindus have been deliberately targeted and their ethnic cleansing has been ruthless, bloody and systematic, yet no one on the global stage bats an eye. Regardless of what all of these platforms proclaim, nobody is willing to discuss the endless agony, victimization and pain suffered by Hindus. This is because the unfortunate truth is that all these platforms are controlled and directed by folks belonging to the Abrahamic faiths’, who only raise their voices when their community is under attack. It is the global leftist cabal that has created a narrative to perpetuate inherent lies and the whitewashing of the violent acts unleashed by the Abrahamics, be they Audrey Truschke, Christophe Jaffrelot, Meena Kandesamy, Nandini Sundar, et al, who have the sole agenda of denigrating Hindus and Hinduism.

Hindus need to learn to fight their own wars, because it isn’t a battle anymore. We should realize this sooner than later, or else what happened in Kashmir and in many other parts of India will be repeated in an unabashed manner across our country by these Abrahamics who have their own greedy agenda to fulfill and achieve, i.e., of global dominance and to eradicate the existence of ‘Kafirs’ or non-believers.