A Hindu Pakistan is a Damn Good Idea! 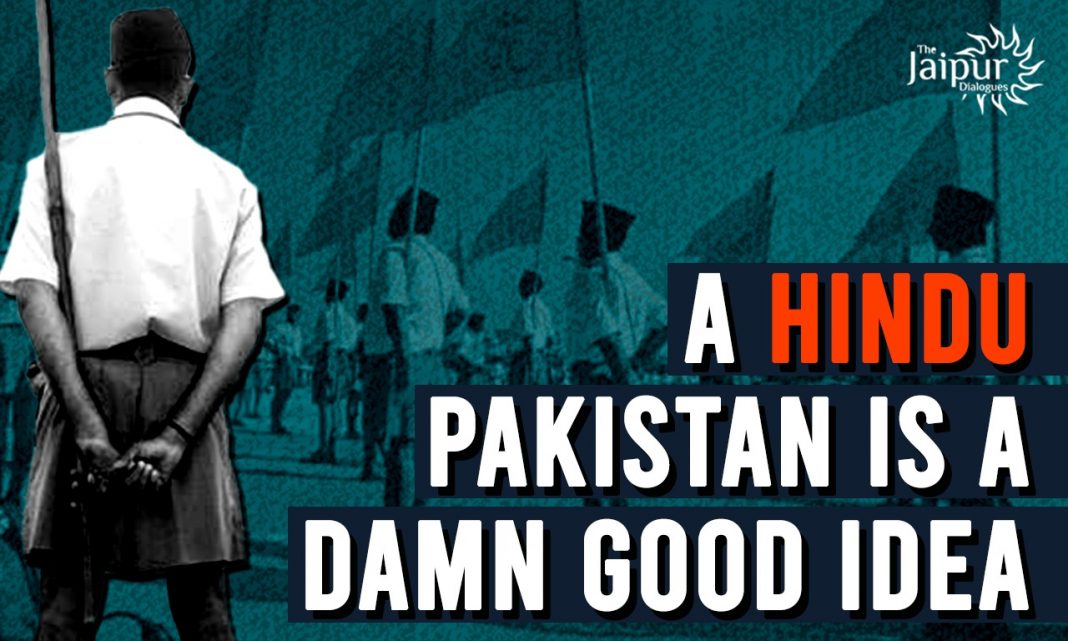 With the recent release of Kashmir files, there has been a lot of outrage in the Left-Liberal Cabal that the movie is trying to ‘Communalise’ the secular fabric of India or the movie is trying to make the nation into a ‘Hindu Pakistan’. Now, although the arguments made here are baseless, the fact that the act of ethnic cleansing of 5 Lakh Hindus doesn’t concern the Left, but their portrayal on screen does, talks a lot about their character and the ideological consistency with the Abrahamic thought. However, this is not the scope of discussion for this article. We need to discuss the latter part. What is a Hindu Pakistan? Is it Good? What’s the status of Muslims or Schedule Castes in ‘Hindu Pakistan’?

Let’s start with the discussion on Pakistan. Pakistan basically means a land of Pure. Although the idea of purity can be traced back to 1400 years, where the entire world was divided in 2 parts: Darul-Harb (Land of Kaafirs) and Darul- Islam (Land of Islam), we can start our story directly from the Mughal Era. Shaikh Ahmed Sirhindi aka Mujaddid-i-Alf-E-Sani was the intellectual inspiration behind the law of Barr-E-Saghir (subcontinent), Fatawa-I-Alamgiri. Shaikh Sirhindi said “Islam and infidelity (kufr) contradict one another. To establish the one means eradicating the other, the coming together of these contradictories being impossible…The glory…consists in the humiliation and degradation of infidels and infidelity. “ This ideological continuity can be seen till date when we hear slogans like ‘Hindutvavaad se Azaadi’ or “Kashmir ka matlab kya? La ilaha illallah”.

The next ideological evolution in the thought of Pakistan was that of Shah Walliullah. According to Shah Waliullah the mark of the perfect implementation of the Sharia was the performance of jihad. There were people, said the Shah, who indulged in their lower nature by following their ancestral religion, ignoring the advice and commands of the Prophet. If one chose to explain Islam to people like this was to do them a disservice. Force, said the Shah, was the better course – Islam should be forced down their throats like bitter medicine to a child.

Shah Walliullah wrote letters to Ahmed Shah Abdali to invade India because the power of the Marathas was on the rise. Maharashtrian historians proudly recall this era as “दिल्लीचेही तख्त राखतो महाराष्ट्रमाझा” means Delhi was under the protection of Marathas. The Red Fort unfurled two flags, one of the Mughals and the other of the Marathas. Although Mughals were a De-Jure power, Marathas De-facto controlled the entire nation. Fearing the rise of Kaafirs, Shah sent a letter to Abdali saying “Allah forbid, if the power of the infidels remains in its present position, Muslims will renounce Islam and not even a brief period will pass before Muslims become such a community as will no more know how to distinguish between Islam and non-Islam.”

In his letter to Najibuddaullah[1], Shah Waliullah said “I appeal to you in the name of Allah and his Prophet that you should not cast your eye on the property of any Muslim. If you take care in this regard, there is hope that the doors of victory will be opened to you one after another”. This advice can be seen in his instructions to Abdali [2] too, where he says “When your fearsome army reaches a place where Muslims and non- Muslims live together, your administrators must take particular care. They must be instructed that those weak Muslims who live in the countryside should be taken to towns and cities. Next, some such administrators should be appointed in towns and cities as would see to it that the properties of Muslims are not plundered, and the honour of no Muslim is compromised”. Any sane person would recognize that what happened 300 years back was no different than what happened 30 years back in Kashmir.

The later ideologue of this idea was none other than Syed Ahmed Khan, who is called ‘Sir’ with delight by our secular friends. Syed Ahmed Khan who established a Madarsa which later turned into Aligarh Muslim University clearly said that- Muslims and Hindus cannot co-exist with each other unless one conquered and put down the other[3]. The practical application of this was seen during the partition of India in Punjab and Bengal. In latter part of 19th century, Sir Syed went for out and out Jihad when he proclaimed in the newspaper Ishtihar “Ye Musalmans, arise, awake! Do not read in the same schools with the Hindus. Do not touch any article manufactured by the Hindus. Do not give any employment to the Hindus. Do not accept any degrading office under a Hindu. You are ignorant, but if you acquire knowledge you can send all Hindus to Jahannum (Hell). You form the majority of the population in this province. The Hindu has no wealth of his own and has made himself rich only by despoiling you of your wealth. If you become sufficiently enlightened, the Hindus will starve and soon become Mohammedans”[4].

This ideological evolution finally led to the consolidation of Territory of Pakistan (Pakistan as an idea is still present in pockets of India). This newly formed nation aligned itself on the lines of religious purity and declared “La Illaha Illalah” as its war cry against Kaafirs. One won’t be surprised to know that the motto of Pakistan’s army is “Iman, Taqwa, Jihad fi-Sabililla” means “Faith, Trust and Jihad for Allah“.

If this is how Radical Pakistan is, why is Hindu Pakistan a good idea?

Pakistan means going back to purity or religious fundamentals. The idea of Pakistan is bad, because the fundamentals differentiate between believers and non-believers. Again believers are differentiated as Shias, Sunnis, Ahmeddiyas etc- Each one of them calling the other a Kaafir. This is an eternal war until the Day of Judgement or ‘Qayamat’.

What are Hindu Fundamentals?

Meaning- I am equally disposed to all living beings; I am neither inimical nor partial to anyone. But the devotees who worship Me with love reside in Me and I reside in them.

In the country based on Hindu Fundamentalism, everyone should be theoretically equal. There should be no differentiation- Not just to humans, but encompassing the nature and animals into the realm of equality. This ideological continuity can be traced back to the recent idea of nation given by Hindutva Ideologue- Veer Savarkar. He was very clear when he said “I wish to relieve our non-Hindu countrymen of even a ghost of suspicion… that the legitimate rights of minorities with regard to their religion, culture and language will be expressly guaranteed: on one condition only that the equal rights of the majority also must not in any case be encroached upon or abrogated. Every minority may have separate schools to train up their children in their own tongue, their own religious or cultural institutions and can receive Government help also for these, but always in proportion to the taxes they pay into the common Exchequer. The same principle must of course hold good in case of the majority too.’’ [5]

But What about Sarva Dharma Samabhav?

Again the idea that all religions are equal cannot be a one way thought. As Hindus, the Sanatana Parampara does not differentiate between two Dharmas. But what if someone is trying to enforce his Dharma on us? Should we tolerate intolerance just because Ahimsa is Parmo Dharma?

The Answer here is a clear NO. Tolerating the intolerance leads to end of tolerance. Himsa and Ahimsa are facets of Chitta, not of Actions. There’s a difference in Karma and Kriya. A Himsak kriya done with the end goal of Ahmisa in mind, is not a Himsa. This continutity of thought can be seen from Geeta to the recent ideologues of Hindutva. When asked about the question of Hindu-Muslim unity, Sri Aurobindo had replied: “You can live amicably with a religion whose principle is toleration. But how is it possible to live with a religion whose principle is I will not tolerate? How are you going to have unity with these people?” [6]. The same thought also echoes in Savarkar’s ideas when he says ‘‘The Hindus will assure them all that we hate none, neither the Moslem nor the Christians nor the Indian Europeans, but henceforth we shall take care to see that none of them dares to hate or belittle the Hindus also.’’[7]

In his Uttarpara speech Aurobindo had made it quite clear that “India rose with the rise of Sanatana Dharma and would die if Sanatana Dharma was allowed to die.” The fact that India survived and Pakistan failed talks a lot about the religious difference between the two countries. The inherent nature of Sanatana Dharma being tolerant has helped India to democratize the power structure among different communities. As Sitaram Goel rightly said in ‘How I Became a Hindu’- “Without Sanatana Dharma, Bharatavarsa for me is just another piece of land, and Hindu society just another assembly of human beings. So my commitment is to Sanatana Dharma, Hindu society, and Bharatavarsa in that order.” Indian Nationalism is not different than Hindu nationalism. Anyways, Sanatana Parampara has no concept of ‘Zimmi’ where people have to pay tax to continue with their faith. Nor does Sanatana parampara prohibit others from following their religion, as Hindus were prohibited by Islamic rulers. The fear of a religious state arises in the minds of Abrahmics based on the knowledge of their own doctrine. They try to view the Indic culture through Abrahamic lens. Based on the theology of treating Non-Believers as second class citizens and denying them any rights to protect and preserve their culture leads to opposition of Hinduization of Indian Polity. Rest assured, Sanatana is all encompassing way of life which makes a person Humanist and Universalist. As discussed earlier, anything associated with Santana is inherently in the welfare of the mankind, the nature and Universe. And since people have a problem with Hindu Hindustan, we would be glad to have a Hindu Pakistan.