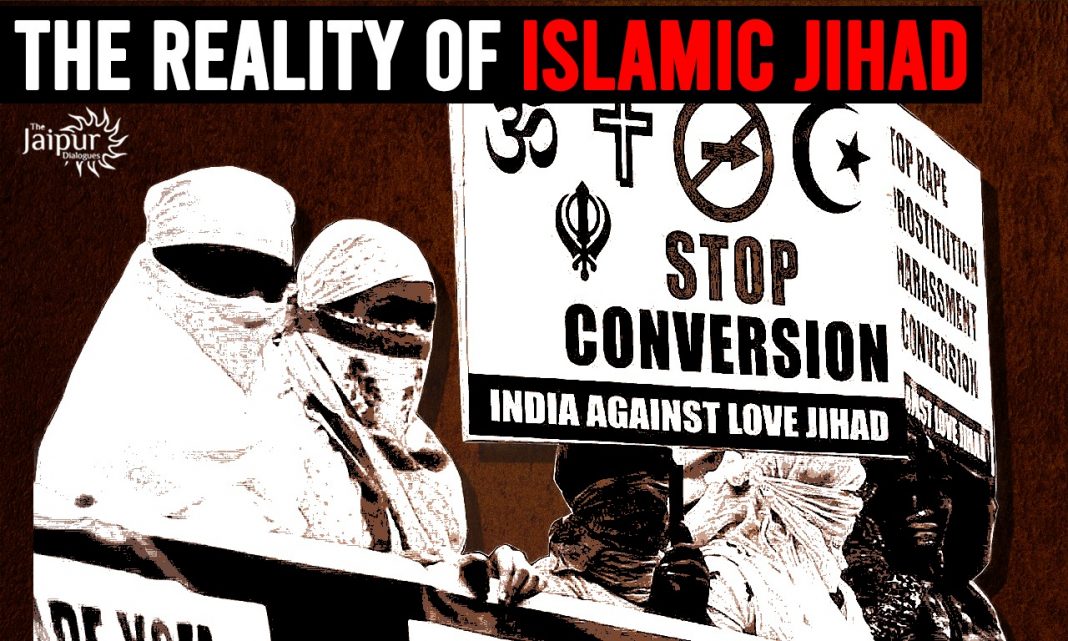 With the movie ‘The Kashmir Files’, some pertinent questions have been raised, one which should have been brought to attention a long time ago to highlight the hypocrisy pursued by the fanatic Islamists, political machinery and the leftist academicians. What happened in Kashmir was just one amongst the many massacres which have been a regular feature in the Indian history, since the advent of Islam. Islamists are driven by the teachings of Koran and Hadeeth(s), and any of their actions taken can be traced back to these books, which form the foundational stone of Islam.

Muslims since centuries have worked upon two basic principles, one to establish their caliphate worldwide and second, to exterminate all the Kafirs. The sooner people understand this basic doctrine of Islam, the better shall it be for their survival and existence. It is imperative for Hindus, especially those who suffer from the disease of Secularism, to understand that nothing such as ‘Hindu-Muslim bhai bhai’ exists, because for Muslims, Hindus were and will always remain infidels and Kafirs. This universal portrayal of brotherhood is nothing more than a sham to hoodwink non-believers, till these Islamists don’t achieve their goals. Here we shall highlight some of the references from Koran and Hadeeth to bring forth the real principles of Islamic Jihad.

As what happened in Kashmir, Moplah, Shaheen Bagh and many other places, it can be understood that Muslims aren’t permitted to live with Kafirs (Quran Surat At-Tawbah 9:28, Sunan Abu Dawud 2645 and 2787) and this being a clear directive, indicates the intolerance shown by the Muslims inhabiting any area. Unsurprisingly, till the time they are in the minority, they start out small and limit their religious practices but the tables turn, whenever they attain the status of a majority. Hindus have either been forced to convert or leave their homes in Muslim majority areas, and this is a sad reality, especially in a country like India where Hindus despite being the said majority still become the unwilling victims of the Sharia laws of Muslims.

In Islam, it is validated to befool Kafirs till the time they aren’t in majority, but in reality, it is a sin to befriend Kafirs or the infidels and if any practicing Muslim does so, they are liable to bear strictest of the punishments as per Koran. Now seeing this in context to what happened in Kashmir, when Girija Tickoo was kidnapped by militants in front of her old Muslim acquaintance or B.K. Ganjoo whose information regarding hideouts was leaked by his own neighbors to the terrorists; goes on to prove that in Islamic Kafirs deserve to die, just for the fact they don’t believe in Islam ( Hadees, ch.3 verse 28; Koran’s Surat no.5 Ayat 51). The reality of Koran when read as it is, is sure to send shivers down the spine of anyone, except those who either have some vested interests or those who willingly choose to remain blinded by the veil of secularism.

The brutal exodus in Kashmir in 1990, wasn’t a one-time thing but rather was the seventh in line, whereas earlier as well six times in the history of India, Kashmiri Hindus faced brutal assaults, where they were forced out of their homes starting from the times of Sikander Butshikan. It is propagated and believed that in Islam, one can deceit people to ensure their survival, but once they gain majority and access, it is imperative for them to expel the Kafirs and this reference can be found on multiple accounts (Al Taqiya (Trimizi Vol 4, Book 1 Hadith 1939, Sahih Al Bukhari 3030). Similarly, what happened with Jews in the Arabic peninsula was exactly the way it happened in Kashmir and this has been mentioned as further, Sahih Muslim Hadith No. 4594. It has been narrated by ‘Umar b. al-Khattib that he heard the Messenger of Allah ( ‌صلی ‌اللہ ‌علیہ ‌وسلم ‌ ) say: I will expel the Jews and Christians from the Arabian Peninsula and will not leave any but Muslim.

The emphatic manner, in which Islamic hardliners and fundamentalists go on destroying Hindu temples and other places of worship across the globe, is a sign of their growing dominance and the very fact that there is no god but Allah. The defacing of idols of Hindu Gods in temples, building of mosques over temples (Ram Janmbhoomi, Kashi Vishwanath temple, Gyanvapi Mosque and countless examples) go on to prove the fact that they have always treated pagans and other non-believers as those who deserve a brutal treatment. It is also stated that Kafirs will have to pay Jiziya and they aren’t allowed to construct anything new and that Kafirs can’t and shouldn’t be treated with respect. It is the right of the Muslims that they will have to fight with kafirs, even if the latter doesn’t. It is an inherent belief amongst Muslims, that they have been sent on the earth for betterment of the society, and if other non-believers don’t understand that, then they can be brutally punished for the same. As has been mentioned in Sahil Al bukhari 3823, it is absolutely justified to break the centers of worship of non-Muslims, now to be fair with so many references running through Koran and Hadeeth(s), how far can one believe Islam to be a religion of peace?

It is for all to understand that Violence and killings will continue till the Day of Judgment, because until then it is a relentless fight for Muslims to impose their faith on others. Now talking about the treatment of women as per Islam, it shouldn’t come across as a shocker the way women have been used as sex slaves and war bounty in the Islamic belief system. The status of Yezidi Girls under the ISIS caliphate or the brutality faced by the Afghani girls under the Taliban rule isn’t something strange or unusual as per Islamic beliefs. The scary and thought-provoking part being the fact that if this the kind of treatment meted out to Muslim females, then will there be any leniency shown towards Kafir ladies? The cases of Girija Tickoo, Sarla Bhatt amongst countless others, along-with Love Jihad is just a precursor of what these people are capable of doing. In Koran, it is absolutely justified to capture women as sex slaves or war bounty and treat them the way they please (Life of Mohammad, pg 466; Al Tabari vol.8 pg 39; Sunan Abi Dawud 4361; Sunan ibn majah, vol.1 book 1, Hadith 89). As per Sahih al bukhari 6603, Narrated Abu Sa`id Al-Khudri:

That while he was sitting with the Prophet a man from the Ansar came and said, O Allah’s Apostle! We get slave girls from the war captives and we love property; what do you think about coitus interruptus? Allah’s Apostle said, Do you do that? It is better for you not to do it, for there is no soul which Allah has ordained to come into existence but will be created. The pitiable treatment against females has been justified time and again under various references (Quran Surah An Nisa 4:24; Surah al-anfal 8:69).

Despite India being the land of Hindus since millenniums, the barbaric and savage Islamic invaders have tried to break the Hindus and dismantle their belief system. In Kashmir, where Hindus were once a dominant majority, after facing brutal onslaughts time and again, they became a minority in their own land. Yet this tiny minority, which was just living off peacefully became an eye-sore to the brutal Islamists. This is so because till and until every non-believer or Kafir doesn’t turn into a Muslim or a believer of Allah, their fight shall continue indefinitely. The responsibility of continuing Jihad is an ongoing process and war with Kafirs is the biggest Jihad. This is proven by the fact that how in a short span of time women and children were killed, tortured and brutalized during the Kashmir massacre, after blaring warnings from the Mosques in Kashmir during the night hours (Syed Bukhari Hadeeth 3012). As per Allah’s messenger, the war shall continue until people don’t accept Allah as the sole god and Mohammad as his messenger (Sahih Al Bukhari 25; sahih muslim 126 Int 21c).

With countless such references and teachings spanning across Koran and Hadeeths’, it is high time for Hindus to change their thinking and adopt an attitude of no-nonsense. With Hindus blindly following the so-called Ganga-Jamuni Tehzeeb, and the other party clearly being non-committal to the love and affection shown, this attitude of too much compassion and adjustment should be thrown out. It is really sad that where Muslims believe in destructing temples, humiliating Hindu beliefs, customs and practices, Hindus on the other hand, have taken the onus of promoting secularism on their own selves. Despite repeated assaults and insults on them, Hindus continue to throng Mazaars, Dargahs for countless reasons, without understanding their long-term implications and the impetus it gives to those Islamic fundamentalists. What happened in Kashmir can still be stopped, if only Hindus wake up from their deep slumber, or else our future generations will have to bear the brunt of our cowardice and failure.

Sant Dnyaneshwar belonged to Maharashtra, a state renowned historically for its leaders and warriors. The writings and preachings of Sant Dnyaneshwar made knowledge of...
Read more