Mookambika Devi And Her Divine Presence in Udupi 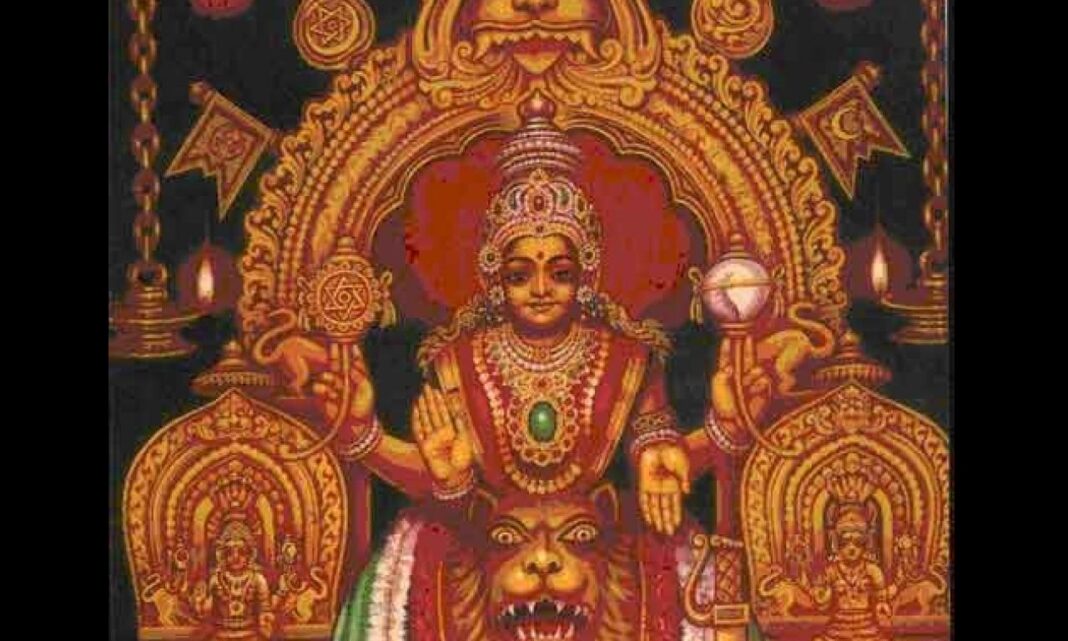 Devi Mookambika is the form of Devi who is worshiped with great reverence all across the Southern part of Bharat. Her most prominent temple is situated in Udupi district of Karnataka in Kollur town. The place is graced by the great mother’s presence. This form of Bhagwathi is the most loved in Karnataka and also has a prominent shiva-lingam here.

The history of the pran prathistha as Shri Mookambika Devi goes back to 1200 years ago.

Mother’s existence in this particular pious form goes back to some legends. There lived a Maharishi Kola, who used to do penance in this region. While deeply in meditation and performing yagnas he was perturbed and troubled by a demon. The demon was living in this region and also was doing penance so that he could become the most powerful of all and dominate people. Since, Devi Parvati knew about the demon, she made the demon dumb, so that he won’t be able to ask for any boons. The demon got frustrated and began to harass the sages around. Therefore, to end this tyranny of the asura who was dumb, that is mook; the sage pleaded Maa Parvati. Eventually, Maa Parvati descended on the earth in Kollur region to kill the Mookasura, and she was hailed with the name Mookambika.

Maharishi Kola worshipped the great Mother and requested her to stay at this place and bless her devotees in the form of Mookambika.

One legend also states that Maa Bhagvati fought a great battle with a demon Kamasura and after slaying him, she stayed here as Mookambika Devi bringing joy and prosperity for the people of the region.

Great Mother in the form of Mookambika is unique in a sense that she is worshipped in all the three forms of Devi. In the morning she is revered as the ultimate symbol of power and strength, Maa Kali. In the afternoon, she presides as Mahalakshmi who is the benefactor of wealth and prosperity, while in the night she presides as the form of great knowledge and learning, Maa Saraswati.

To revere the great Maa Mookambika every year ‘Rathaolsavam’ or the chariot festival is celebrated with great pomp and devotion in the Udupi district of Karnataka. For three days Devi is taken on a visit of the city from Kollur to Sringeri and near the forest. This great procession is taken in with great joy by thousands of devotees who throng to have a glimpse of the divine mother.