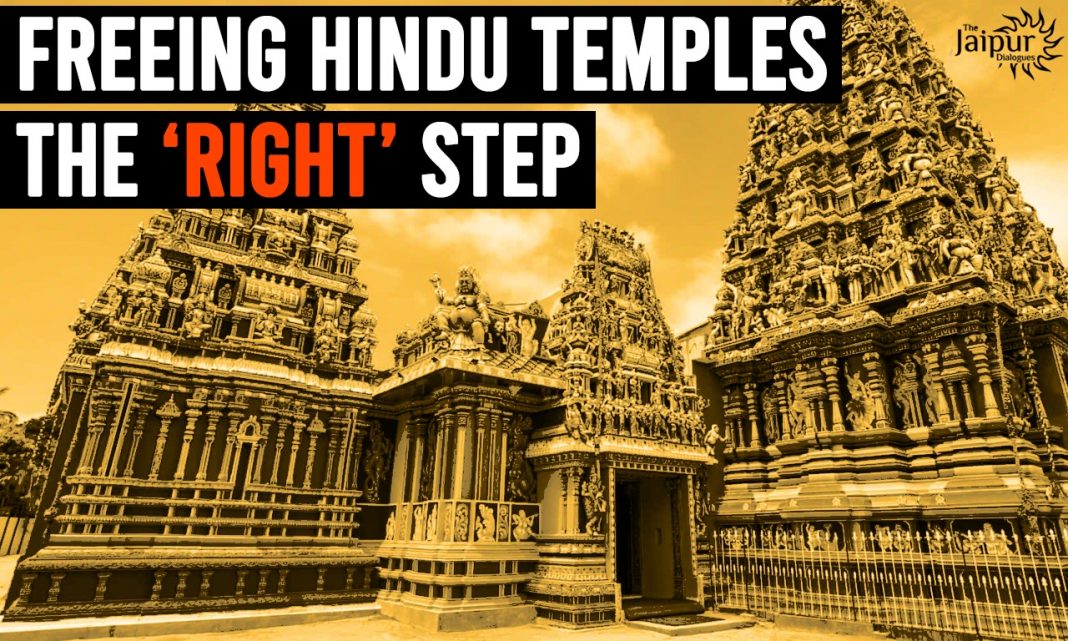 Hindus have long been denied rights to manage their own Hindu temples, but this historical wrong needs to be corrected and the step taken by the Karnataka is in the right direction.

A recent positive development is a proposal by the CM of Karnataka to remove the state’s control over Hindu temples by giving autonomy to those under the Endowment Department. In the long run, Hindus will benefit greatly from the implementation of this plan. So why exactly is it so important?

It is important to understand a brief history behind it, i.e. every right related to religion comes under Art.25-28 of the Indian Constitution. It is mentioned that every religious denomination or a religious organization is free to manage their own affairs in ‘matters of faith’. The state cannot interfere in the exercise of their duties, until and unless they are a threat to public order, health and/or morality. It is up-to the Courts to decide whether a particular a ceremony or a rite is considered essential by the laws of that particular religion.

The right is, however, subject to regulatory power of the state under clause (2) (b) of Art. 25. This implies that secular activities connected with religious institutions can be regulated by state as per law.

Waqf boards oversee all Dargahs, Mosques, Kabristaans, et al in Islam. In India, there are 30 Waqf boards, controlled by the Central Waqf Council India, whereas Gurudwaras are either managed by the Shiromani Gurudwara Prabandhan Committee or local SGPC chapters in Delhi, Haryana, etc. While it is true that not only temples but other religious bodies are accountable to the government, the discretion of using funds and resources is managed by the people overseeing the practices of each religion, but why isn’t autonomy granted to Hindu temples? The ruling dispensation in Tamil Nadu recently sought to melt unused temple jewelry held by temples in the state, a decision shunned after widespread protests. But the point is, why would only the assets possessed by Hindu temples be targeted? Why aren’t resources from religious bodies of other faiths also utilized? We can also apply the same principle to their contributions if we believe everyone has an equal claim to the resources of the country. Due to the lopsided burden shared by Hindus across India, Hindus are being unfairly targeted, and this discrimination is not only unfair, but it has detrimental long-lasting effects.

Why does the government manage temples in different states? It would be useful to examine the history of Tamilian temples and their subsequent control by successive governments. This can provide insights into the current status of temples across India. Sanatan Dharma and Sanskriti have always been associated with temples, which serve as the nerve center of the Sanatani Parampara. Therefore, attacking the temples would be an attempt to weaken the entire community and undermine the belief system.

In 1817, the first Madras Regulation was passed, and the East India Company took over the management of the temples. The motive of controlling temples was simple, for controlling them meant taking land, gold, diamonds, basically usurping wealth, for their own greed and selfish interests. The looters carried everything they could manage to move from the temple while leaving what couldn’t carry away. Just 23 years later, in 1840, they released a directive to let go of temple control; this came after Christian missionaries protested that managing ‘pagan’ temples was against their principles. The fact being that they no longer had any business there, since they had looted all the gold and other wealth. This was convenience and hypocrisy at its finest. Temples became hubs for organizing freedom movements in 1925, which is when the Madras Religious and Charitable Endowments Act was enacted. The temples were kept under government control to ensure they were monitored. Due to vehement protests from minorities, the Hindus were once again cornered. Minority worship places could not be controlled, so only Hindu temples were held under the act.

If a citizen of India reads the fundamental rights given to every citizen in the Constitution and then reads the HR & CE laws, they will find it absurd and outrageous. To deny one community the right to keep its own places of worship is nothing less than apartheid and smacks of inherent bias. Why can those from other communities manage their religious affairs, but the silent and peaceful majority cannot?

Due to the unfortunate control and excessive hindrance caused by the administration, Hindu temples were unable to flourish and develop the way they should, in contrast to other religions’ ever-growing footprints and acquisition of resources. The Hindus have long been at the mercy of others, their emotions are tossed aside with each passing day, and despite the fact that Hindus are in the majority, they have been marginalized and exploited by the political parties, which succeeded in dividing Hindus over futile and falsely created issues, so that they get distracted from the real issues and were prevented from uniting.

Hindus need to recognize that their silence isn’t their strength, but has been interpreted as a sign of weakness. Silence isn’t always golden. The fact that the Hindu community has turned a blind eye to the ever-growing expansionist activities of those belonging to Abrahamic religions has resulted in the current dire situation, which is not only alarming but poses a grave danger to the Hindu community. In spite of Muslims representing roughly 18% of India’s population, the Waqf board owns the third largest amount of land in India, behind the Indian Railways and the Defense Department. Despite the fact that Christians are a minority in terms of population, why does the Catholic Church own the largest chunk of non-agricultural land in India?

It’s astonishing that despite being the majority in India, we are denied the right to manage our own temples. Is this a hate-motivated policy that only targets Hindus? Isn’t it possible for Hindus to maintain their own places of worship? It is imperative for people to understand that contrary to coercion in other religions, Hinduism is based on faith and belief and that any forced guidance or regulations’ aren’t welcome unless sought.

The Hindu outfits have long sought to manage temples, which they now have been granted in Uttarakhand and are in the process of obtaining in Karnataka. It is a crucial and welcome development. The fact that Hindus today are uniting and understanding the importance of their voice and collective communion is positive and encouraging. This is because they can no longer bear the sole responsibility of practicing secularism by themselves. This message shall be heard loud and clear by all.