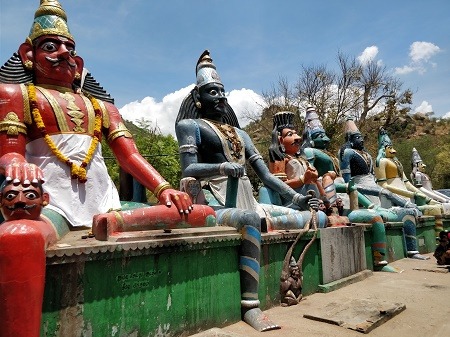 Bharat is filled with pantheon of deities, where every region and culture have their own personal pantheons. This takes us to the flourishing land of Tamil Nadu, where one of the most revered local rural deity is Karuppu Swami. His name implies, ‘the black deity’. He is called by many versions of name like, Kuruppu swamy, Karuppasami, etc.

Legends Related To The Deity

He is sometimes known as one of the forms of Bhagwan Shiva. Also, many consider him to be manifested through Vishnu Bhagwan’s hands. There are strong beliefs of people who consider him to be the 10th avatar of Mahavishnu, the Kalki. Because of his fierce form, holding the sword and riding the horse, which is a similar depiction of Kalki according the Puranas.

In ancient Tamil culture, the warriors who were martyrs, were worshipped as Veerakal and formless stones were erected in their memory.

The warriors who had laid their lives for the good cause of the society were revered as sub-deities.

Lord Karuppu Swami is worshipped in many different forms and also various names are given to him based on these forms. Some of them are-

Kuruppu Swami being a fierce god is guardian of the poor and helpless but never forgives the sinners. His eyes are wide and full of anger. He adorns a big moustache and his forehead is smeared with ash and dark red kumkum.

His shrines are always situated at the outskirts of the villages, so that he could guard the people from any evil powers. His shrines do not have big Gopurams or a definite architecture. Most important aspect of his worship is the non-vedic and non-agamic invocation. In rural parlance, the deity is invoked through folk songs and dances. Such kind of local customs are prevalent in all parts of the country wherever the rural deity is invoked and worshipped. The priest in the temples is of a non-Brahmin clan. There are people who a have a blessing of the god and are highly devoted to the god, then they become the channel of invoking the deity. This is the basic pagan approach of deity worship.

He is also worshipped to get rid of any kind of black magic. The most common offerings given to Kuruppu Swami are milk, camphor rice, ghee, cloves and alcohol. Animals like goats, pigs and chicken are also sacrificed at the altar of the deity.

Original temple of the lord is situated in front of Azghar Koil in Madurai. All other temples all across the state are established after taking mud from here. The great Sabarimala tample also has Kuruppu Swami as the guardian god of the premises.

The annual festivals are celebrated to honour Karuppu Swami, which are differentiated according to the customs of the particular villages. The village committee decides the timings. A flag is hoisted to announce the commencement of the festival and nobody can go out or come in during those 2-3 days of the festival.

Karuppu Swami is the lord of justice, balance and strength and is revered in all of the tamil Nadu.