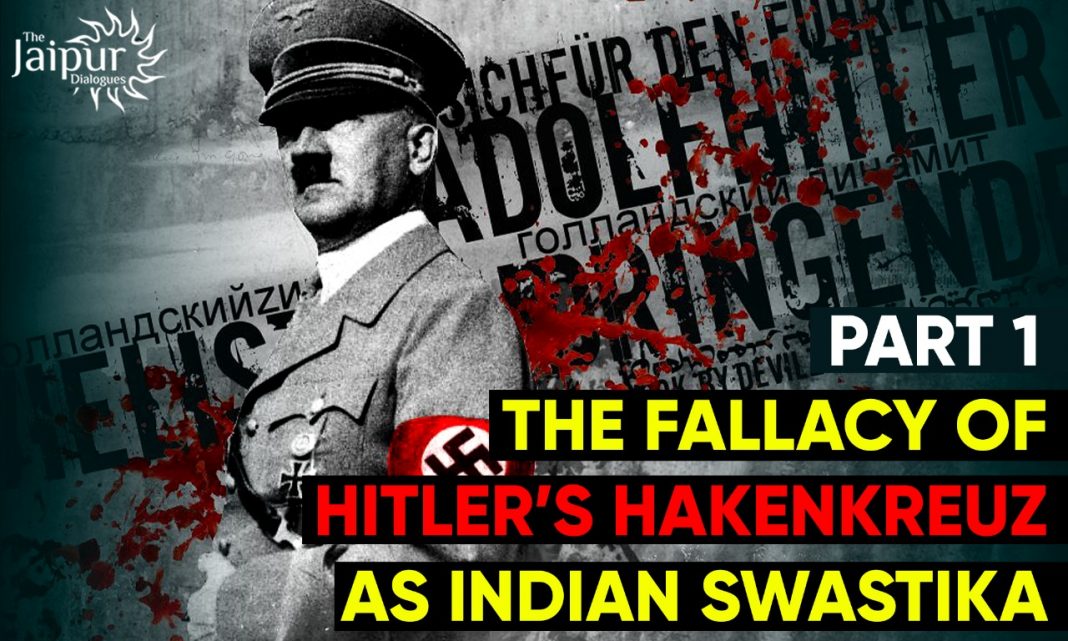 Today we bring forward to our esteemed readers an article on the propelled lies of the western media and the leftist dominated pseudo-secular brigade. In a shoddy and a deliberate attempt to malign the revered religious symbol of Sanatan parampara, the Hindu Swastika was linked with the symbol of the brutal and vicious campaign undertaken by the despotic and fanatic German dictator Adolf Hitler, against the Jews. The facts brought forth in the Article, shall serve as an eye-opener for all the Hindus whose religion has been wrongly stigmatized.

The Swastika is an auspicious symbol for Hindus and carries important religious significance. So, how come it came to be associated with Hitler, for this we need to delve into Hitler’s past. Hitler since childhood was always fascinated by Christianity and churches, this resulted in him developing a myopic view towards other religions. In the book, ‘Hitler- A chronology of life and times’, it is mentioned that he declared his hatred towards Hindus and boasted about association with Britishers and stated that they shouldn’t lose control over India, as losing grip over India would be shameful for the whites, since he believed that Nordic people have the right to rule over the world. Hitler was a propagator of racial superiority and this seeped hatred against other races made him undertake questionable actions on people of whom he believed were non-Aryans.

Hitler delivered a speech on 8th August 1941, where he dwelt about capturing Russia the same way, the Britishers captured and treated India. On 17th-18th September, he yet again declared that if Britishers were to leave India then it would collapse in no time. Hitler publicly proclaimed that India’s slavery is the natural justice of law by calling them of low race. So how can someone who hated Indians, use their important religious symbol of Swastika to be the lynchpin of his entire political career?

Just to inform the readers, a simple Google search yielded the following results for the word Hakenkreuz, which was translated to Swastika; but the real magic happens when it was translated as separate words, it means ‘hooked cross’. This is interesting to note, i.e. when cross is a sign of Christianity, then how did Hakenkreuz become Swastika? Turning back the pages of history, we observe that even before Hitler used Hakenkreuz, it was used by the Finnish Air force and was known as Hakaristi…which when translated to German means Hakenkreuz.  Many other examples of using Hakenkreuz as a symbol include Airplanes of Air forceUnit N-124 in France or on the Rouble printed in Russia post 1917.

In 1913, a textbook of Westfield high school in USA depicted a sign similar to Swastika and below that, the word Gammadion was mentioned.  This word carries immense significance and warrants attention but has been overlooked for centuries.

So now we discuss about the purported use of Gammadion as Swastika. So what exactly is a Gammadion? As per contemporary English, it means a symbol which appears similar to Swastika, but as per The Glossary of Liturgical and Ecclesiastical terms in 1877, a Gammadion simply refers to a cross found in Churches since a very long time. The story behind the use of cross, purportedly as Swastika has its roots in history, which shall shock everyone and establish a link as to why did Hitler mercilessly slaughter around 6 million Jews.

In 1868, a German archaeologist traveled to Greece to find the ancient city of Troy, and by 1871 he was successful in his endeavors and found the ruins of Troy. The remains of the cross found there were similar to the Swastika. In 1885, Heinrich Schliemann’s book ‘Ilios’ was published in French, where he used the word Swastika for this symbol.  But what did he imply by using the word Swastika for Gammadion? By translating this word, it simply meant here that Schliemann had intended to use this word as a cross. In 1891, the book was published in English and multiple times, the word Swastika was used in reference to a hooked cross.

The usage of the word Swastika as a substitute for cross was not appreciated by friends and fellows of Heinrich, especially by Max Mueller. Mueller categorically denied the usage of the word Swastika and believed that it was good enough to be used in India itself as it had its roots from India. He believed that a lot of these crosses originated throughout the world and using the word Swastika to denote the same shall allow people to assume that it has association with India. In the book, ‘The Migration of Symbols’, it is mentioned that Gammadion is a type of Christian cross and not the one used by Hindus i.e. Swastika. So how come India’s Swastika, a symbol of Hindu religious sentiments, was made Hitler’s Hakenkreuz, which wasn’t even connected remotely?

As mentioned above, Hitler in his childhood was enamored by Christianity and wanted to be a priest. Since his childhood he had been observing the cross sign and as per Robert Payne, this sign could be the inspiration of the Nazi Hakenkreuz. The usage of the cross is rooted in his profound love for Christianity and his relation to monastery points to that direction. In the year 1871, the word Swastika was used for the first time in the Oxford dictionary, so what was the word used for describing the word Gammadion before 1871? In The Pursuivant of Arms, published in by the British Library this symbol is referred as FlyFot or Gammadion. The Gammadion has its roots in the word Gamma, this symbol was used by the Christians to protect themselves against genocide attacks, and this was because using a simple cross could invite riots, as the Christians at that time were a demographic minority.

There are many instances where the Gammadion sign has been displayed, for instance be it the 8th century Holywell and cross slab of Saint Brigid in Ireland, 6th century Hagia Sophia mosque of Istanbul, or the Gothic cathedral of Notre Dame, symbol of cross and hooked cross can be seen placed with each other. The Merovingian Dynasty had many types of symbols printed on their coins, one being the hooked cross; the same hooked cross can be seen on gravestones found in Bosnia between 13th-16thcenturies. The same cross can be found across various mythologies related to Christianity and in the present times, even on the floor of Pope’s official residence in Vatican City.

Hitler being a fanatic, believed and proclaimed that he was on this planet to finish the unfinished work of Jesus and this statement was published on 12th April 1922, in the Nazi newspaper ‘Volkischer Beobachter’.

In an interview given later that year, he described that how he was fighting against Marxism and believed Jews were connected to it and that Jesus, himself was Christian. In 1926 he declared that he was there to finish the unfinished tasks of Jesus against Jews. In an interview given on 25th October 1930, Hitler declared Hakenkreuz as an important part of Christianity, and further added that this cross was a symbol of Christian resistance against Jews, Bolsheviks and Marxist. His delusion didn’t stop there as he believed that if Jesus would be re-born then he too, would join the Nazi Party of Germany. He described his work as God’s work and wanted to run the Nazi party as a religious order.

Hitler being a megalomaniac discarded the theory of Jesus being a Jew because he believed that Jews were hardcore capitalists and that they could pollute everything wherever they went. Hitler tried modeling himself on the lines of Christ and even went on great lengths to prove himself as a true blood Christian, this led him to re-create a very famous painting of Christ’s baptizing ceremony, where on similar lines he depicts himself there instead of Jesus.

According to the census conducted in 1933, 67% of the Germans were protestant Christians and the rest were Roman Catholics. In his book Mein Kampf, Hitler mentions that the Catholic church is indifferent to the problems of the German people, because the latter was connected to Rome, whereas the former was the one linked to Germany. This didn’t imply that he was against Christianity but his thought process was different for Jesus and Christianity. Hitler even went on to reject the Old Testament of Bible as Jews also accepted it.

Till now it has been made very clear that our Swastika, a symbol of Sanatan Parampara has got nothing to do with the Hitler’s Hakenkreuz and the latter has its roots in Christianity itself. Hitler was a devout Christian and had nothing to do with Hindus, especially considering the fact that for him Indians were a lowly race. In the next article, we shall cover what exactly transpired amongst the insecure Western nations, who wanted to bully India and Hindus specifically on a global platform by insinuating them and degrading their religious symbols by associating it with an event in history which marks a black blot on humanity, perpetrated by a fanatical and a disillusioned man called Hitler.

Reference- This article is drawn from a documentary by AKTK to help Hindus understand and respect their Sanatan values and for the ignorant leftist cabal who wish to downgrade the Sanatan culture on a global platform, by associating the Nazi symbol of Hakenkreuz with that of Hindu Swastika.