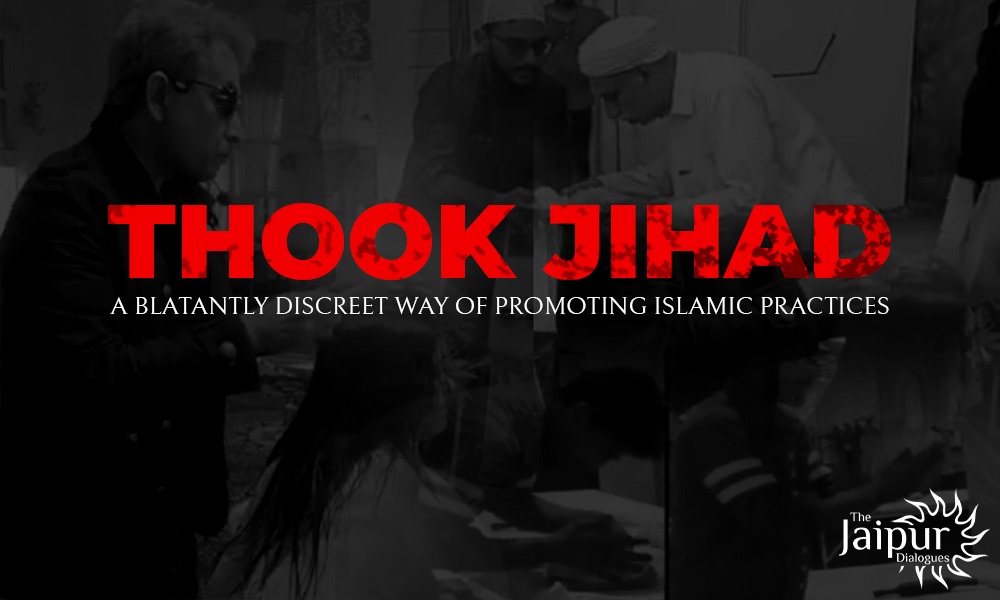 Nothing unusual has sprung from the bag of arsenals possessed by the Jihadists and Islamists, and the recent blatant use of Thook Jihad by a renowned hair-dresser Jawed Habib, has put focus back onto the much displayed rabid behavior of these Islamists. These hard-core Islamists somehow have an innate belief that they have the onus of purifying things, whatever that they might encounter, but it is too simplistic an assessment, the actual goal may be more sinister.

Islam & Jihad are two sides of the same coin. Jihad as a concept carries different connotations for different situations. Jihad is the holy responsibility of the faithful. The Quran (22:39) allows the use of force in self-defence: ‘Permission [to fight] is given to those against whom fighting is launched, because they have been wronged’ as well as in the Qur’an (5:32) states: ‘whoever saves the life of a person is as if he has saved the life of the whole of humankind’. Now to be fair, the meaning of these verses can be defended by the followers and leftist preachers but in reality these verses are taken out of context and used by the Mullahs preaching in seminaries and madarsaas to propagate their line of thinking, and Thook Jihad is just a part of it.

The act of Jawed Habib is a symptom and an extension of the Islamic line of thinking and their belief system. Muslims have been caught at various occasions following Thook Jihad, whether it was a man named Sohail who was caught spitting on rotis in a wedding he was working at or recently when a Maulana in Kerala was caught spitting into food. So why is their spit so pious or why is this act of spitting so important? This is because it’s called ‘Fatiha Jalana’. It’s done after the food is cooked. Some Quranic verses are read over the food to either pray to Allah to cure diseases or make a wish to Him. Some blow air and some don’t. It’s Fatiha where you take out some food and ask for Barkat (good fortune),” and this has its roots from here, i.e. in Islam, spitting helps in warding off the ‘evil spirit’ or ‘Satan’. According to Sahih al-Bukhari, Volume 4, Book 54, Number 513, spitting to your left is a way to be safe from bad dreams. This belief is re-affirmed in Sahih Muslim, Book 026, Number 5463 which states that spitting to your left thrice thwarts the interference of Satan.

The readers of this article would appreciate the SO CALLED great service, these spit dispensers are doing to the humanity by warding off the interference of Satan. The entire humanity shall be indebted to them forever!! Right?? So spitting in food is one aspect but can anyone explain how does spitting on someone’s head be equivalent to spitting on food? To drive home the point, what Javed Habib did was a clear and simple case of violating someone’s body rights….how can anyone violate the personal rights of others, especially that of a woman and without her explicit permission? Adding salt to the wound, he shamelessly declared, ‘agar aapke parlour mein paani ki kami ho toh aap customer ke baal thook kar bhi kaat sakte hain… aur mere thook mein kitna dum hai ye dekho”.

Hindus need to understand that there is a deeper malice behind this, this isn’t and won’t be a one-off event and is not limited to spitting. On the contrary, it underlines the systematic attempts by these fanatics to propagate Islam, by hook or by crook.

The way Jawed Habib mistreated the lady in the circulated video, goes on to show the real face of these Muslims and how they treat women, where the latter have no say on their body rights, what is scary is the fact that if he had the audacity to commit such an atrocious act in front of public, then what happens with females behind the closed walls, shouldn’t come as a shocker to people.

Jihad can be practiced in any manner and may relate to everyday aspects of our life be it, Thook Jihad in food, Land Jihad for illegal occupation of land by converting public spaces into unwarranted mosques and mazaars, Love Jihad where Hindu girls either on a false pretext or otherwise are forcibly targeted by Muslim men for marriage.

It is true that Muslims in the garb of secularism promote rather force upon people their ignorant practices and beliefs whereas Hindus rather timidly prefer wearing the cloak of secularism, which ultimately is leading to their decline but no one is ready to wake up from their self-imposed deep slumber. Promoting these practices on a larger level shows the reality of the hard line Islam. Such instances have surfaced time and time again. The silence of Hindus is deafening to say the least which further gives ammunition to this peace-loving community and its followers. It is high time that these Jihad propagators are dealt with an iron-fist, as this sham of an apology tendered by Habib is nothing but a shallow drama enacted to fool Hindus, because yet again Hindus will start flocking to his salon chain and he shall be minting money. This never ending saga of forgiveness and forgetfulness by Hindus doesn’t bode well for their future.