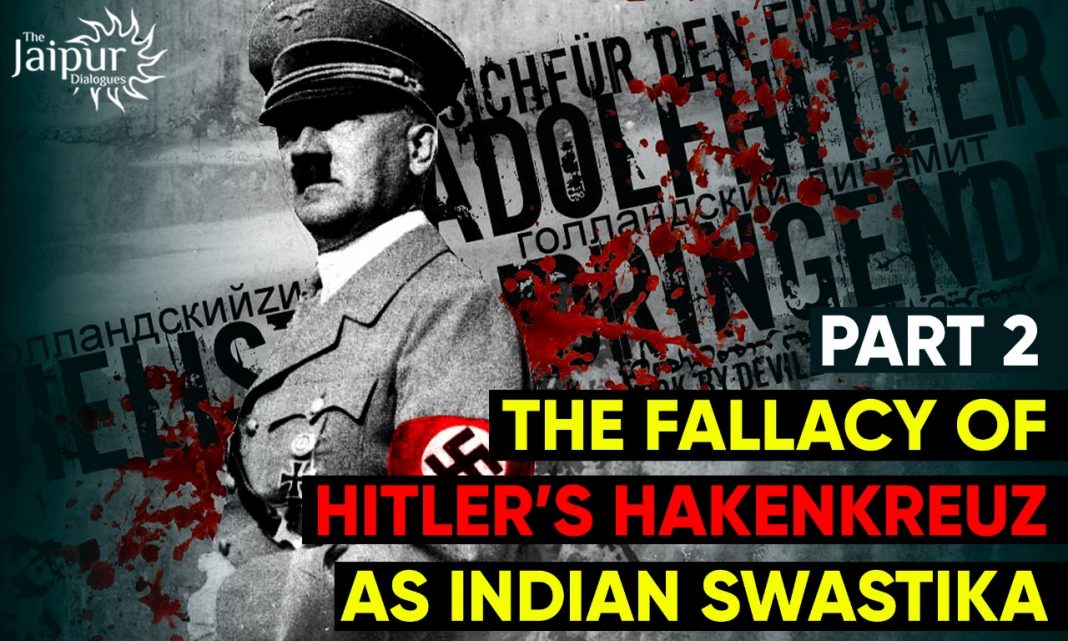 With regards to our previous article on the fallacious connection of Hitler ’s Nazi Party’s symbol of Hakenkreuz as the Swastika for Hindus, we bring forth to you the final chapter in understanding the fiendish role played by the western media and why should we now stop encouraging this false notion of Hakenkreuz as Swastika.

In 1920, Nazi Party of Hitler, published ‘25 points of German religion’, where point no.24 mentions that Christianity was the base of the Nazi party. As mentioned in Hitler’s book, Hitler’s true regime practices are mentioned in the book, i.e. how the German Christian movement was running along with the help of Nazi party. The insignia of that movement was a combination of a simple and a hooked cross. The published magazine ‘Evangelium’ of the same organization carried the same insignia.

A 1933 portrait of the German artist John Heartfield, highlights the reality of that time, wherein Jesus is standing with a cross and a Nazi party worker is seen converting the normal cross into a hooked cross. In 1938, Hitler published a stamp where he was standing outside a Church with a Latin cross on top and a hooked cross flag. Multiple branches of Hitler’s unified armed forces ‘Wehrmacht’ had a cross and a hooked cross on every flag. The ‘League of Nazi Women’ awarded to German women and the ‘Honor cross of German Mothers’ honoring the mothers of soldiers or the ‘German Order Medal’, the German air force and even the artifacts, all carried the cross and the hooked cross, together. This goes onto show that originally the hooked cross was used as a symbol for Hitler’s Nazi Party and there is no remote mention of the same being called or referred to as Swastika.

In 2010, Pope Benedict declared that Hitler was an atheist and wanted to remove the existence of God from the face of the earth, but to be honest all of this seems a blatant hogwash to disassociate Christianity with the fanatical Hitler, as that was distorting their image of a peace-loving community. But in all ways, the words and actions just don’t match, because Hitler’s love for Christianity and his statements stating the same, paint a different picture than what was said by the pope.

Further evidences prove that the belt worn by Hitlers soldiers on the battlefield had written on them ‘God with us’ in German. In 1933, a Jewish lady named Edith Stain had converted to Christianity and became a nun herself. She wrote a letter to Pope Pius stating the agonizing repression of Jews in Germany, in hopes that he will highlight this issue on a global level. Today there is evidence, that even though the Pope had read it, he due to whatever circumstances, chose to ignore and neglect it and she herself unfortunately, breathed her last in a concentration camp in Auschwitz. Though today she is known as a martyr in Christianity, but at that time the Pope read and ignored her letter…doesn’t this all appear in juxtaposition of what is preached and what is followed by the religious heads of the said faith. To highlight this deafening silence of the pope on this entire issue, Carlo Falconi wrote a book ‘The Silence of Pius 12’.

In 1942, Pope Pius in his Christmas speech criticized the Nazi Party, but ironically did not mention anything about Hitler, even though Jews were man-slaughtered by him in a terrifying dance of death, choreographed by Hitler himself. Whether Hitler was impacted by Catholic Christianity or not can be questioned, but he was impacted by Christianity for sure. An English daily depicted Hitler as a chimpanzee who was shown carving a simple Latin cross into a hooked cross and it was mentioned below,’ New Christianity-100% Aryan’. This goes on to prove that this hooked cross was nothing more than a symbol of destruction and hatred and was not at all linked to Indian Swastika.

So how did this saga of linking the Hooked cross with the Indian Swastika come into picture? Now comes into picture, a vicious trap set by the western media to gradually start defaming Hindus, who had no link whatsoever with Hitler and his carnage but to protect and clean their own bloody hands by defaming Sanatan.

On 21st November 1922, New York Times published an article about Hitler in which his followers were called as followers of Hakenkreuz. In this article, Hakenkreuz wasn’t described as though it was understood that people knew what the symbol meant. In 1933, after Hitler came to power New York times, again wrote an article where Hooked cross was written along-with the word Swastika, where it was mentioned that Swastika reached Germany from India, showing no link or any proof, as such at all. So what link does the hooked cross have with the Indian Swastika, the answer was given in a 31st December 1939 Article of New York Times, talking about the ‘Antique Crosses of Christiandom’, where it was mentioned that there are hundred types of crosses but core are basically of 5 types, and one which is the hooked cross has links to the cruel symbol of Swastika. The same New York Times in 1933 mentioned the hooked cross as swastika, yet again in a blatant role-play of victimization in a 1939 article, they stated that the hooked cross was a victim of Swastika. Irony died a thousand deaths and no one shed a tear and why would they?? It was and still is the same old story of Hindus being victimized, time and again.

The Basque museum in France which has been printing its bulletin since past 80 years has the same symbol similar to the Gammadion which is called as the Basque Cross. It goes on to mention that Swastika doesn’t exist in the Basque region and such types of crosses are very common.

Prof. Max Mueller too emphasized that the symbols found in the Troy excavation aren’t similar to Swastika. The word Hakenkreuz is found in the German dictionary Adlung in 1878, which means a cross adorned with hook, but there’s no mention of the word Swastika, implying there was no link between Swastika and Hakenkreuz.

So the question which arises is, Christians who earlier referred to the Swastika as a cross suddenly started addressing Hitlers Hakenkreuz as Indian Swastika? The answer lies in a vicious planning hatched against Indians. In his book ‘Mein Kampf’, Hitler describes the significance of his party’s flag colors and symbols and Hakenkreuz symbolizes the goal of his party, which was to achieve the victory of the Aryan race and was also anti-semitic. Hitler though mentioned that he would start a creative work for the same but didn’t mention the nature of creative work he shall undertake for Jews, ultimately in future that creative work turned out to be nothing but the infamous Auschwitz camp. In this camp more than 11 lac people were killed and more than 9 lac people who were killed were Jews. This figure is only specific to Auschwitz, because within this timeline, he killed more than 6 million Jews. So, the main goal was the elimination and destruction of Jews and this is where the conspiracy to convert Hakenkreuz as Swatika was hatched.

In the English translation of ‘Mein Kampf’, Hakenkreuz has been translated to hooked cross and nowhere the word Swastika is mentioned. In 1933 after coming to power Hitler started to plan a conspiracy against Jews and in 1939 Hitler destroyed Poland, this is the turning point in history when ‘Mein Kampf’ was re-translated in English. This time by James Murphy and now Hakenkreuz was translated as Swastika. Hitler in his book mentioned Hakenkreuz to be fatal to Jews and this could have turned out to be a black spot for Christianity, so what do you do? Play the victim card by crying hoarse and blame Hindus and their auspicious religious symbols, and for this, a well planned and executed international strategy was put into motion. The translator James Murphy was himself a priest and couldn’t bear to associate Hakenkreuz with such a big stigma and most importantly, not damage Christianity as a religion and this is the reason why in his translation he denoted Hakenkreuz as Swastika.

Though Hitler never used the word Swastika for Hakenkreuz but in a systematic fashion, it was linked to Swastika. American journals and other publications clearly indicated and linked this symbol with the word Gammadion but this sudden change of linking it to Swastika can be traced to a Hollywood movie Proibido, where it clearly mentions the hooked cross as the Indian Swastika. This is where exactly the deliberate perpetuation on the use of Swastika as Hitlers hooked cross can be seen.

Hence, it is very clear that the malicious and evil plan of defaming Hindus and their auspicious religious symbols wasn’t something done suddenly, but in a planned and well-thought manner. The Western media was the one behind unleashing this stigma on Indians just to disassociate their religion from the brutality Hitler associated it with. But all being said and done, it is important for Indians to now raise their voice and defend what has been portrayed wrong in the history for last many decades. Unfortunately, even today any random search over the internet on Hitlers Nazi Party symbol is re-directed to linking it with the Indian Swastika and this needs to change, on an urgent basis because this stigma is not for us to bear, anymore.