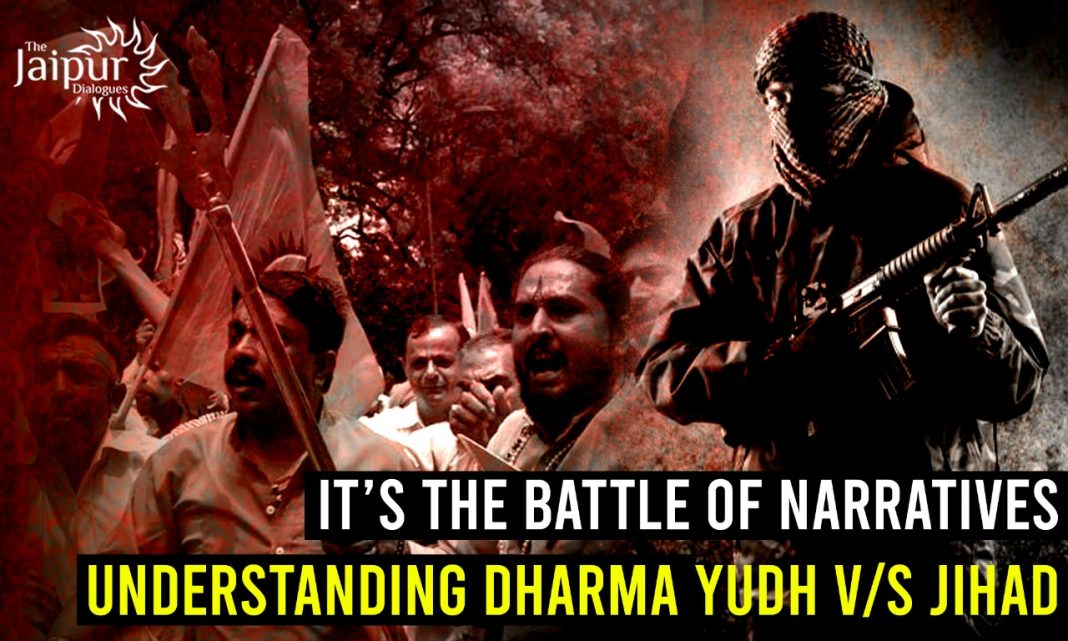 Time and time again, a false narrative is deliberately pushed and run by the leftists and the pseudo-seculars of our nation, with a focused agenda, i.e. to defame the Sanatan Dharma and equate it with Islam and its barbaric practices. This is done with malevolent intentions and is a blatant attempt at trivializing Hindus and their Dharmic beliefs.

Islamist apologizers and sympathizers have built a false web of narratives to influence the general public that Hinduism propagates violence in the name of Dharma. The secular and leftist cabals brazenly misquote and misrepresent our ancient scriptures like Ramayan and Mahabharat to portray that Bhagwan Krishna in Mahabharat instigated violence against Kauravas using unjustified means. The cherry on the cake being that they create a potpourri of negative emotions to stir communal hatred and propagate a feeling of inferiority amongst Hindus by placing the fanatical Islamists and Mullahs on a higher pedestal which they do by cleverly camouflaging the odd, brutal and regressive practices of Islam.

So what exactly is Jihad? In its literal sense, Jihad means struggle and it finds mention in Koran multiple times as Jihad-E-Akbar and Jihad-E-Asghar, the latter is defined as the Jihad of the sword and is communal in nature. The Koran mentions about fighting against those who attack Muslims, albeit, if the other side is the first one to do so. Having said, it becomes imperative to understand that the very basis of communal Jihad arises from the fact that Muslim fanatics in majority of the cases are the aggressorsand indulge in activitiesthat go against the set rules of any civilized society and disturb the communal balance.In the book Al-Hidayah, Jihad is mentioned as ‘Shariat me deen-i-haqkiaurbulaneaur use qaboolnakarnewale se jangkarneko Jihad kehtehai’.But Muslim apologists don’t call it a holy war but it refers to a human struggle of right or wrong, whereas in Koran, Verse 9:29 calls for Jihad and means dominance over other religions, and to fight the non-believers.

In the past 1400 years, Jihad had been initiated against millions of Hindus by Ghazni, and Islamic onslaughts in other parts of the world had nearly wiped out Buddhism from the Indian subcontinent and Zoroastrianism from Persia. In Islam, the motto to attract people was to promote materialistic quests, which meant, a political war, and people were inspired to fight for Jihad. Recently, a Bareilly based cleric MaulanaTaukeer Raza Khan stated that, “The Day Muslims Decide to Take Law in Their Hands, Hindus Won’t Find Space to Run”, is a pointer in the same direction. Agenda of Koran is to promote the feeling of Jihad in the Ummah and it conditions the behavior of Muslims to act in a certain way. Koran is taken to be the book which offers the right path and is taught to every Muslim. In Islam, mental graphic imagery is very violent which promotes ego-centrism amongst Muslims and inspires them to kill people and promote acceptance of Islam. In Hinduism, war is only an option for self-defense.

War has been the only option for Muslims, as to what they did in Mecca, despite being small in number and openly mocking polytheists and considering the fact they entered Medina as refugees, where they were invited. Forte of Muslims is that they only attack when they gather arms and a have a ready force of people to fight, just like pack of wild dogs attacking lion.

A false narrative has also been attempted to equate the teachings of Koran and Gita, but the reality is that they don’t teach the same thing.The fundamentals of both the books are different; Koran is based on militancy and extremism, whereas Hinduism works on Dharma, and advocates good over evil. Islam is war centric, whereas war in Hinduism is based on justice v/s injustice. In Hinduism, there are laws of wars and have to be accepted by one and all and to ensure the natural flow of justice, there are steps taken to avert a war before initiating it, i.e. diplomacy, sacrifice, reaching to a mutual decision, war being the last option.

In Hinduism, there are codified rules to fight a war, whereas Koran is a total war based doctrine, unleashing terror and threat is an integral part of it. In Mahabharat, Krishna tried to pacify Kauravas, and convinces them to not fight the war, whereas when Muslims went to Medina, they ran a campaign of slaughtering natives of Medina by not only killing able-bodied persons and teenage kids but also women, who were held as captives and treated as slaves.

In Islam, Jannat is promised as a source of pleasure and there are seven types of Jannat identified, the last being Jannat, where Allah himself is there to welcome the person who enters there, which is known as Jannat-e-Firdaus. Though in Islam, idol worshipping is a taboo and is strongly discouraged as Allah is believed to be formless, then how does he possess all positive godly virtues? In contrast to Islam, in Sanatan, Bhagwan is beyond any human attributes and encompasses one and all.

Allah is like an alter ego of Mohammad; created to promote Islam. Islam per se is about aggression and not self-defense. The examples of the same perpetuated ideology can be seen in today’s times be it ISIS, Taliban, Pakistan and other Islamic nations, where brutality, crimes and killing is the order of the day.

In Sanatan, union of God with human beings is possible (aham brahmasmi), whereas in Islam, humans and Allah are different. In Islam, idol breaking is common because they don’t understand the importance of idols due to the teachings they are imparted by the Muslim clerics, these people won’t talk about virtues, morals, ethical or non-material things, but focus solely on materialistic virtues and expectations. It is important that Muslims need to recognize what is idol worship and they need to understand that idol is a personification of physical properties of God. Unfortunately,any physical manifestation becomes an idol for them.

We need to understand that DharamYudh is spiritual in nature and signifies righteous warfare and equals fight equal, with fair rules and lives of women, children, farmers, and prisoners of war were to be treated as sacred. Dharma Yudh signifies a war that is fought for the upkeep of Dharma and principles of righteousness and not for personal gains or selfish reasons. Whereas, Jihad is used as a tool for propagating Islam and that can happen by various means mostly by coercion and forced conversions.

Hence, the comparison between Dharma Yudh and Jihad doesn’t arise because the ideologies which these concepts stem from have absolutely different roots and value systems. Sanatan is not a religion or a cult but a value based system which works for universal brotherhood, love and growth whereas Islam is based on spreading the tentacles of their faith by subjugation and brutal killings of Kafirs as a way to display their dominance and establishing a world order as per their whims and fancies, all with a selfish motive in mind.

Therefore, it is for the Hindus to understand what is meant by DharamYudh and not let others dictate or superimpose there understanding of righteousness. It is the battle of ideologies and to ensure our survival and existence, we have to unite and come out strong in order to fight against all those who are out to subdue and threaten our identity.