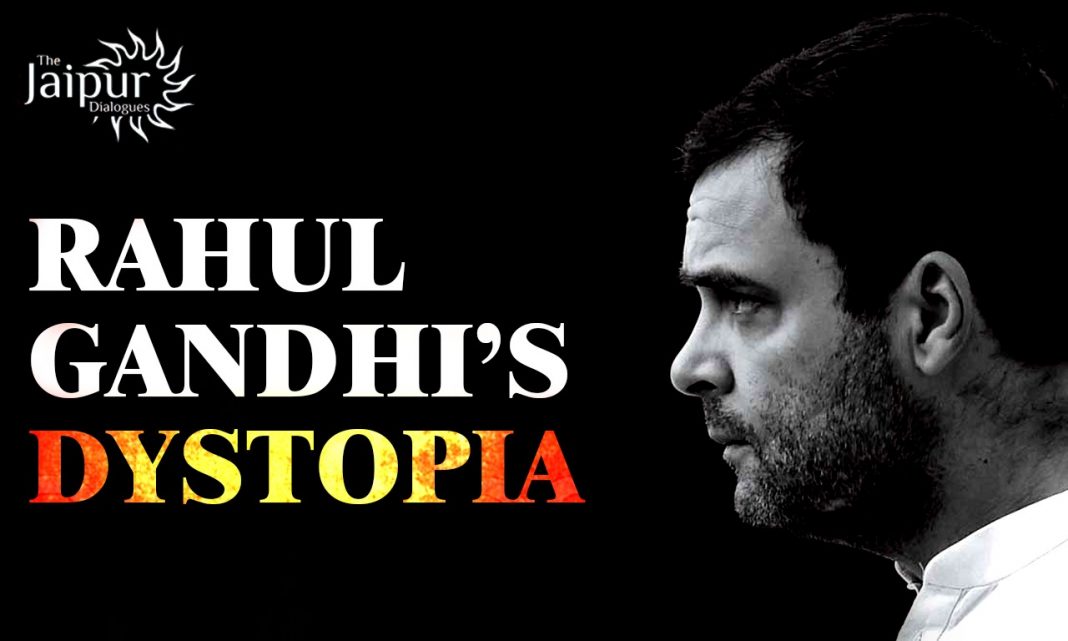 Is it any wonder that the Gandhi dynast was in the news recently, as usual, speaking against national interests and supporting anti-India forces, a stance he has taken time and time again? This time, the ‘Enlightened’ Rahul Gandhi said that India is only a ‘union of states’ and not a nation. This was a deliberate, well-designed plot to stir the debate of sub-nationalism in India, taken against the background of the fact that a large section of the Indian population is sensitive and assertive for their cultural identity. This statement was preceded by a statement underlining the separate cultural identity of Tamil Nadu.

The Gandhi family has a reputation of playing on the religious and cultural sentiments of the people to achieve their political goals. The family has been known to promote divide and rule policies in the country to create chaos and further their own political goals. Rahul Gandhi has set a dangerous precedent this time in expressing his hate and displeasure against the ruling dispensation by stating, “India is described in the Indian Constitution as a union of states and not a nation. One cannot rule over the people of a state in India. Different languages and cultures cannot be suppressed. It is a partnership, not a kingdom”. This statement shows Rahul Gandhi ‘s political immaturity because he believes that the centre-state relationship in India is based on negotiations. According to him, India is not a holistic national identity, but rather the result of an agreement between different provinces. The word province is key here because the existence of states in India is a utopian notion for him. Isn’t it surprising that his party, the Congress, is fighting state elections at the moment and not provincial elections?

Someone whose knowledge of Indian history is confined to the post-1947 era, and that too is flawed, constitutes a significant threat to national integration. In 1947, after traumatic partition, several provinces that were British Indian provinces, directly ruled by the British Empire, merged to form India as a nation. In addition, there were the remaining 565 princely states that enjoyed relative autonomy while under the British rule. After all, Rahul Gandhi ‘s forefathers and ancestors were themselves involved in the brutal and traumatic partition of India. Therefore, it’s not surprising that he is completely clueless about Ancient Bharata and its unity. For someone who never truly understood what Akhand Bharat was before Abrahamic forces invaded, understanding the richness and majesty of what Bharat meant, is indeed a tall order.

Since ancient times, India was known for its ‘unity in diversity’, not the diversity mainstream today but the diversity of cultures, traditions, and practices from the past. Diversity is being fed to us today as acceptance of Abrahamic religions under the guise of promoting brotherhood when, in fact, it is an attempt to obliterate Hinduism and Sanatan Dharma. As a result of the Gandhi-Nehru clan’s time in power, the mockery of Hindu sentiments and their spiritual identity has been perpetuated and aggressively promoted by the Congress administration.

The most egregious display of Rahul Gandhi ‘s ignorance was his misquoting of Article 1 of the Indian constitution and public display of the idea of a ‘Union of States’. As per Article 1 of the constitution, India is described as, ‘India, that is, Bharat, is a ‘Union of States’. In keeping with his sinister ideology, Gandhi misconstrued what it meant to be a ‘Union’ in order to make a speech about ‘Federation’. Gandhi, in his unprovoked attack, not only deviated from the actual meaning of the Union of States, but also from the reasoning behind using the word ‘Union’ instead of ‘Federation’ that was crafted specifically by the drafting committee. There was a belief among the members that the word ‘Union’ accurately described the relationship between two units because the union of India is not the result of an agreement between old provinces, and it prohibits the processes of seceding/separating from the Union or changing the boundaries of the States at their own discretion.

Dr. Ambedkar stated that the Indian Federation was not a union of states like America, which was based upon mutual agreement, and that Indian states cannot secede from the Indian Union. Hence, the federation is a union because it is indestructible. There was danger and trouble in the Gandhi scions’ repeated references to Tamil Nadu and his direct challenge to the Union Government to establish control over the state. It’s important to understand and appreciate the fact that Northern and Southern parts of India have such different cultures, and it becomes all the more imperative to respect the feelings of all parties involved and address issues in a non-partisan manner. The hereditary heir (pun intended!) of the political party has repeatedly failed to stir up sentiment amongst the people of India, formerly on the basis of religion and caste, and today regarding regional identity, in this case, the sole aim is to create tension within the country to gain traction.

Following Rahul Gandhi ‘s venom-spewing speech, PM Modi educated the self-appointed heir about our ancient wisdom and knowledge, as well as displayed to the entire Congress party the reality of the past 50 years, when they ruled the country. As per PM Modi, according to the Vishnu Purana, the Sanatan Dharma has been influenced by sages for centuries, and it was and shall remain the land of saints and sages. According to PM, the people of India are referred to as Bharati in the Vishnu Purana. The vast land of India has successfully merged cultures and traditions from around the world over the ages, which have been present here since time immemorial.

A quote from the Vishnu Purana by the Prime Minister surprised not only the Congressmen, but also those belonging to the leftist and pseudo-secular ecosystem, which considers Indians to be weak and divided, undermining their traditional values and inherent strength. This falsely portrayed picture by the anti-state characters is far from the truth and this reference was not just a one-off statement by the PM, but is an indication of the coming times when Bharat will regain its lost glory and the anti-India forces will be sidelined.