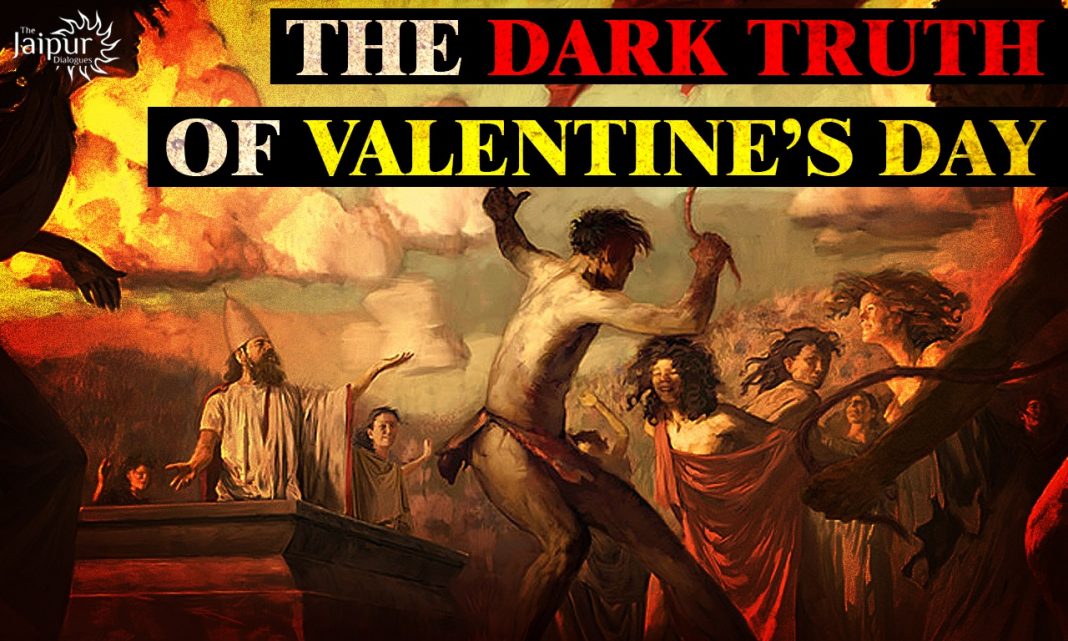 As youngsters today will blindly ape the western concept of celebrating Valentine ’s Day, we delve deep to understand that why we need to stop adopting this slavic mentality and not waste our time, money and efforts on such celebrating frivolous events.

As the date of 14th February approaches, mad frenzy over professing undying love for each other ensues. The celebration of love is pushed to unimaginable levels, with one day designated to declare one’s love for the other forever, but how does one celebrate this? By spending thousands of rupees on products that symbolize love, who knows that true love could end the next day? Each year companies push forward the agenda to promote Valentine’s Day so that they can earn millions. To be completely honest, there is no emotion involved, just pure business.

Valentine’s Day has never been a part of ancient Indic culture and celebrations because, in ancient India, love is a commitment for a lifetime, one that promises mutual unity and support for each other, unconditionally. The Abrahamic system has imposed a timeline on everyone because they believe that time has a finite value, while in the Sanatan Dharma, time is ever-changing and multi-existent, spanning many realms. Is it possible to celebrate love only on one day, and what about the rest of the year? Hindus need to understand the dark truth behind the all-rosy picture painted about Valentine’s Day and why we shouldn’t fall prey to the advertising stunts perpetrated by the west to fuel their own nefarious covert agendas.

So how did we start celebrating Valentine ‘s Day on the 14th of February every year? Besides being dark, muddled, and bloody, the origins of this festival have also been murky. The story takes place during the Roman Empire, when the Roman men celebrated Lupercalia (the Festival of reproduction) from February 13th to 15th. Men from the festival sacrificed a goat and a dog each, but they followed an incredibly disgusting practice by whipping women with the hides of the animals they had just killed. Noel Lenski, a historian at the University of Colorado at Boulder quoted the following, “The Roman romantics “were drunk. They were naked.” This absurdity would not end here; rather young women would line up to be beaten up by men. It was believed that this would make them fertile. The question is whether they did it voluntarily or forcefully, but either way it was shameful and reflects a deeply misogynistic society. Compare this to our ancient Sanatan Dharma, where women were treated on an equal footing with men and enjoyed complete freedom in many aspects of their lives.

The ordeal for females did not stop there, to add further to this menace of celebrating ‘love’, a fete was organized, where men would pick up names of young women from a jar and post that they would be coupled with each other for the duration of the festival or even longer.

This sounds belittling and against a lady’s natural rights, doesn’t it? The so-called modern western society of today, which prides itself on being unorthodox and open, conveniently forgets its troubled past in which women were subjugated and were exhibited as objects of desire.

Pope Galasis-I connected the date of 14th February with Valentines in order to destroy Roman idol worshipping and Christianize their culture further, by instituting the tradition of celebrating ‘Valentine ‘s Day’ and not let this blot of a festival destroy the so-called peaceful image carved by the Christians. Until the Fourteenth century, there was no connection between ‘Valentine ‘s Day’ and ‘Love’.

During the time of Claudius-2, Rome’s king in the second century, he wanted the youth to join the army, and in order to do so, he ordered them not to marry, as he believed that getting involved in acts of love and marriage would distract them from their duty. The decision of his did not sit well with his people, one of whom was a Saint (yes, a Saint) called ‘ Saint Valentine ’. Upon instigating the youth to rebel against the king, the king ordered for the saint to be imprisoned and hanged. Lo and behold, this is where the story gets interesting, i.e. a saint who renounced worldly pleasures while accepting sainthood fell in love with the jailor’s daughter. Hence, this begs the question, shouldn’t everything and anything associated with the western Abrahamic religion be confined to the western world. So, what connection does it have with India, particularly the Hindus?

Valentine ‘s Day emphasizes on physical and materialistic connection rather than mental and spiritual. Besides the superficial, unrestrained display of love, there’s also the obscene display of wealth, where people give expensive gifts to their loved ones, creating insecurity among those without the means… hence, propagating a blind race towards materialism. So the moot point is, as the westerners themselves do not value familial relationships, what culture do they promote? At a time when their parents need love, support, understanding, and care, they send their parents to old-age homes. Why is love restricted to physical attraction? Love is sacred when it is shared with one’s near and dear ones, whether they are blood relatives, towards their Guru, or even towards their motherland. The selfless freedom fighters like Shaheed Bhagat Singh, SC Bose, Lala Lajpat Rai, Pt. Madan Mohan Malviya and many others sacrificed their life for their country; isn’t this an act of true act of love or should it have been restricted to the 14th of February? If that would have been the case, it would have meant that we wouldn’t be a free country today, and this forms the very foundation of how differently relationships are regarded and valued within the Sanatan Dharma.

To be fair, what role does St. Valentine play in Indian culture? It is highly unfortunate that today’s youngsters have followed wrong idols, whether they were conscious of it or not. Is it not possible for us to emulate great men like Shivaji Maharaj who, at the age of 16, swore to establish Hindavi Swarajya?  In today’s society, young people must create their own strong identities, ones that are unique from the culture adopted from the west.

There is no spiritual significance behind celebrating Valentine ‘s Day, whereas our festivals are based on scientific principles. Our learned rishis and sadhus have recorded in scriptures the importance and benefits of celebrating festivals and this is the reason the same festival falls on different dates every year, as opposed to the western culture where the date of celebration is fixed, which shows the scientific advances propagated by our ancestors since ancient times. As there is no scientific proof to support their significance, such cultural events have a lot of detrimental effects on students and youth, as they divert their focus from developing solid and lasting relationships to superficial ones, which is detrimental both mentally and physically. It is high time the youth of this progressive nation understood that events like these are nothing more but a cultural distraction designed to pull us further away from our Dharmic roots. Besides destroying our ancient cultural practices and belief systems, this causes a fall in morality in our society, which we can see today as a result.