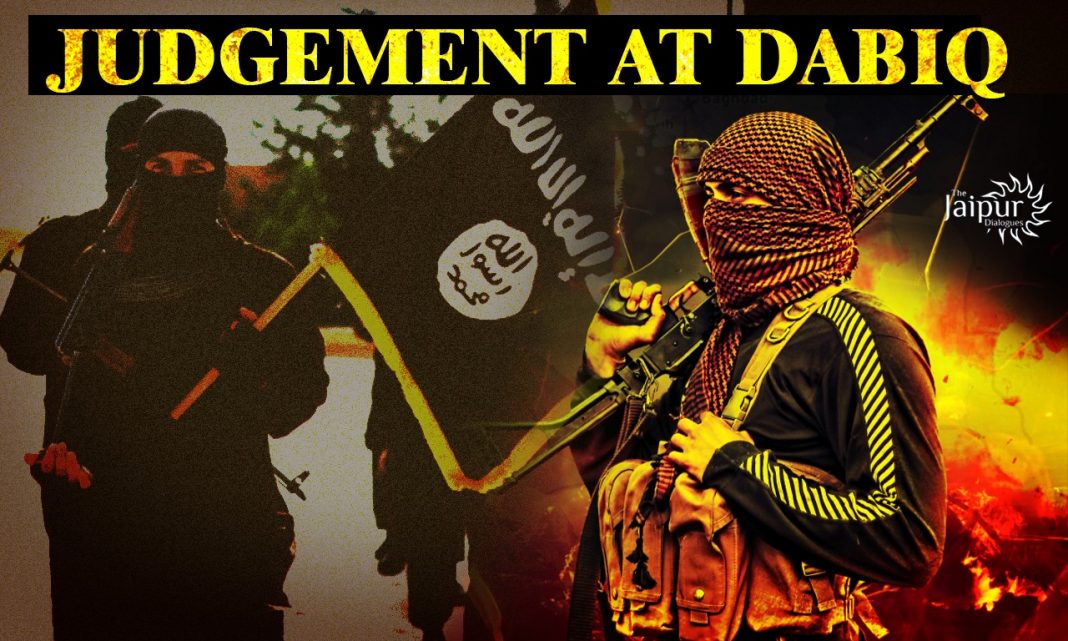 A short story of faith and betrayal

The sun was setting across the Euphrates. Shazia had just fled Raqqah. Her husband Makhtoum had died the previous day. The public on whom he had ruled was looking for ISIS fighters and their wives and killing them mercilessly. She had fled the city along with another local Syrian fighter Al-Mujahid, literally meaning the warrior for Allah.

They weaved their way through the outskirts, took a pick-up to reach the M4, got down at checkpoints of various militia, skirted them, hiked, walked and crossed the Euphrates in a boat near Sarrin just after dawn. They had reached the town of Al Bab by nightfall the next day. They hid in a house belonging to a friend of Al-Mujahid, Al-Mansoor. Daesh was probably between them and Dabiq, or maybe in Dabiq. They did not know.

Shazia got up early next morning for the prayer of Fajr. She did the unthinkable. She changed the qiblah, and prayed facing Dabiq instead of Mecca.

Her prayers had been answered. Ever since she married Makhtoum, she had longed for the Day of Judgment that was promised by Allah at Dabiq. She was sure in her mind that Allah had willed her to Syria, and then within a nodding distance of Dabiq because Christ was coming to join the Prophet, peace be upon him, and deliver the promised salvation.

She prayed facing Dabiq, her Salafi style prayer. She remembered her years as Alice; a young, carefree girl studying medicine in Calicut when she met Makhtoum. She was tall and slender for a normal Keralite. Her eyes spoke eloquently. She loved playing music and taking part in theatre. She was outgoing and actively participated in athletics event, doing well in 1500 metre runs.

They had a tempestuous love affair. She was so madly in love with Makhtoum that she thought nothing of converting to marry her. She did try to test Makhtoum briefly, asking him to convert instead. Makhtoum expressed his inability. He said his community would kill him, as apostasy was punishable by death in Islam. Her friends warned her against giving up her privileges as a woman provided by the Indian Constitution. Her friend Roopa advised her to marry under the Special Marriage Act without having to convert. Makhtoum was cold to this suggestion as well. He quoted a verse from Qur’an to say that he was not allowed to marry an unbeliever as that would be apostasy and punishment for apostasy was death.

Alice was so besotted and blinded that she decided to convert and marry without even consulting her doting father and mother. They were so shocked that her mother Mary even tried to commit suicide twice. Her father suffered a brain stroke and barely survived. Her younger brother went into depression. She suffered pangs of guilt when she came to know about it, but she buried herself into lessons of Qur’an, Hadis and Sir’a that hardened her. In these times of doubt, she would remember the 135th ayat of the 4th Surah. ‘’Be with the Truth, even if it be against your own family”.

Makhtoum’s cousin who used to work in Qatar fascinated her. He brought videos of the fighters of the Islamic Caliphate. He was the one who radicalised an already devout Makhtoum. Shazia was totally fascinated by the promise of eternal heaven. When Makhtoum was killed in his jihad-fi-sabillillah, she envied him because he had gone directly to heaven without having to wait for the Day of Last Judgment. She had heard of the last fight at Dabiq between the Maghrib and and the Momins. As a woman, she considered it her duty to serve the Momins who would rid the world of the pestilence of unbelief and bring in the last battle. She was now barely 20 miles away from the scene of the last battle. She did not have a clear idea but she thought that the Caliphate Army was in control of Dabiq, and as the West-backed forces attack them in Dabiq, Christ and the Prophet would appear, the forces of unbelief would be defeated, and she would get her Judgment to go to heaven. She felt blessed. Prophet had said that women were only half of men, and not more than 20 percent of them would go to heaven, but she was sure that she had done so much piety that she would get the Judgment. All she needed to do was to be in Dabiq when the Judgment is pronounced.

Al-Mujahid joked with her. “Why do you need to be physically in Dabiq. All corpses and skeletons would come to life anyway and face their moment of Judgment”.

Shazia shushed him. She had donned her full burqa. She wanted to be in Dabiq before nightfall. They slunk out.

By late afternoon, they had reached Akhtarin, less than 7 miles from Dabiq. They had food in the house of a friend of Al-Mujahid. The friend was not sure of the battle situation. He had heard sound of shells falling on Dabiq all of last week. The battle that Shazia wanted to witness was probably over, and possibly against the Caliphate.

Shazia’s mind reacted with a numb negation of whatever was being said. Her heart was dictating her mind. Her consciousness seemed to ebb away.

“How can that be”, she thought. “Dabiq cannot be lost to the faithful. It is our Last Post. I have seen Christ in my dream. He was heading in this direction. It cannot but be for heading to join the battle and defeating the Dajjal”.

She refused to believe that Daesh could be defeated. Prophet had said that Dabiq would be the Final Battle. She came out of the house in her burqa and headed towards the last battleground. Al-Mujahid refused to go with her. He was convinced that the evil of Daesh had been defeated. If they have retreated, they would be right outside Akhtarin. The Alleppo railway line just outside the town provided excellent defences. He would rather go to Kobane that was totally safe under the Kurds.

Shazia shouted at Al-Mujahid. She told her that he would burn in eternal hellfire for being fearful of the infidels. “I am going”, she said. “I have seen Christ heading to meet the Prophet. Nothing can stop me”.

Al-Mujahid pleaded with Shazia one last time. “Sister, let us be realistic. Daesh defences are just outside. You know the Daesh protocol. If you are seen in the company of a non-family member, you know the Shari’a punishment. It is not possible to cross the Daesh lines”.

“Are you telling me that you do not believe in the day of Qiyamah? You should not call yourself a believer any more. You will burn in eternal hellfire”. Shazia shrieked.

Al-Mujahid shrugged his shoulders. He wanted to physically prevent her from moving out. He owed it to his late friend.

She stepped out into the lane outside and ran towards the linking road. Al-Mujahid followed her.

As she came on the road, a pick-up bearing Kalashnikov wielding fighters screeched to a halt next to her. They were flying the Daesh flag. Al-Mujahid saw it from where he was. He froze. He knew what would happen to Shazia now. If only she had not believed in the Books blindly. If only she had been less devoted to the Word. He could see the portents. Clearly.

“Stop, you slut. What are you doing here on the road, alone?”

Terrified, she blurted out in broken Arabic that she was invited to Dabiq.

“You Hindi”, laughed a fighter derisively.

All the others joined them.

An elderly looking man, probably their commander, shouted at her — “You prostitute, you are a spy for Al-Nusra here. What are you doing here”?

Shazia took out her Daesh identity card and showed it to them. In her broken Arabic, she tried to tell them that she had fled from Raqqa when Daesh lost the city, and was headed for Dabiq for the Final battle.

They conferred among themselves.

“Where is your husband, or brother? How is it that you have come out alone? Don’t you know the Shari’a?”

“Then you are fit to be a concubine”, the Commander grabbed her and pulled her over. “She is my property, he shouted”.

All others kept quiet. They sped out and reached a dilapidated house.

The Commander prised her out. He grabbed her by her hand and yanked her to a room. Rudimentary arrangements were available in the room. The door had been blown out. There was a torn curtain on the door. A ramshackle bed occupied one side of the room.

The Commander ordered her to take off her clothes. Shazia did not comply.

“I have taken you as my sabiyya. You cannot refuse me”.

“Stop arguing, you slut. All non-Arab women are sabiyyas”.

Shazia’s burqa was pulled out. Her illusion was also being pulled out. She lost her will to resist.

Commander was brutal. He tore off all her clothes. She was thrown on the bed. Then he paused to pray.

She was brutally raped by the Commander. She remembered the dream she had. She had dreamt of a perfect world, a fair land, and a heaven in which there was no pain, and no savagery. How did she land in this hell. These brutes were not ready to listen to the teachings of the Prophets. After the rape, the Commander took some water to purify himself, and sat down for a prayer again.

Summoning all her willpower and strength, Shazia ran out, without clothes. Soldiers were relaxing. They were startled. By the time they could gather their wits, pick up their weapons and run after her, she was gone a mile. She was flowing through the streets as Alice used to flow through the track as an ace runner. She had reached the embankment of the railway line. As she climbed the embankment, she could see the outlines of Dabiq clearly. She had seen this picture in the Daesh periodical Dabiq quite often. She stood mesmerised. She expected Christ to appear any moment and take her to the Prophet.

She did not realise when the bullet came. There was a burst from behind her.

As she saw blood spurt out, she felt a searing pain in her heart. She looked in front. She looked for Christ, she looked for Prophet. She did not see anything. The pain had become unbearable. Consciousness was ebbing away. She fell forward. As she fell, she saw a razzle-dazzle of stars. Where was she? Was that the promised heaven? It did not seem special. Just a blur.

Night was falling; an Azan was going on in the distance, calling the faithful for Ish’a prayers.

A vulture came and sat near the fallen faithful, giving her company.