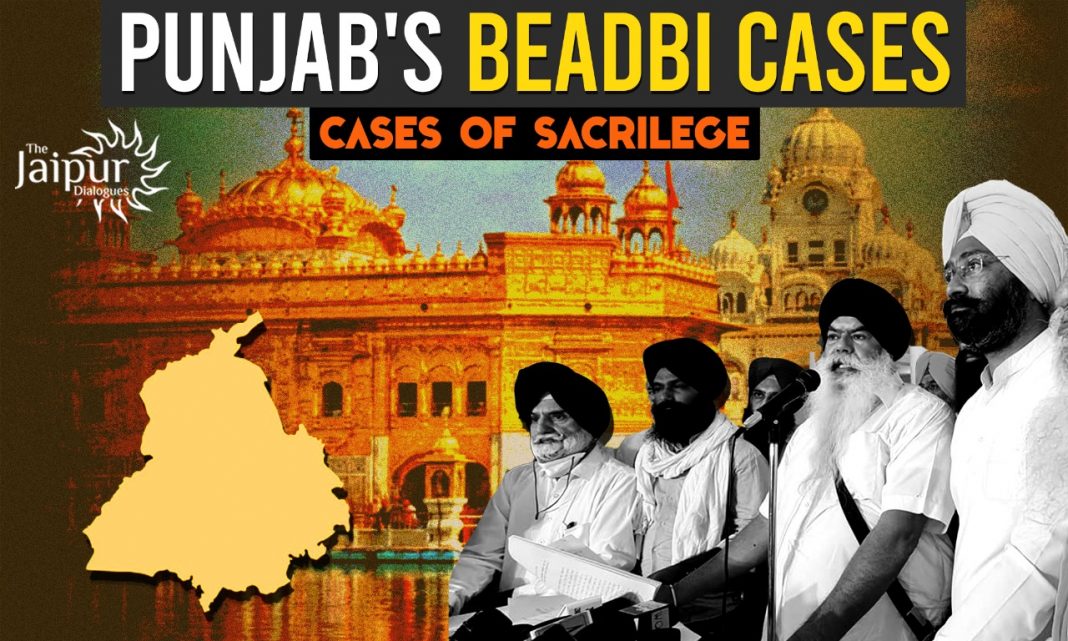 The recent cases of Beadbi in Punjab have created a stir amongst people, especially
amongst the Sikh community. So what is sacrilege? It is an act to insult a religious object,
symbol or a religious book which carries the sentimental value for its followers. In Sikhism, the Guru Granth Sahib, as well as the Nishan Sahib is accompanied with a kirpan and a turban, carry religious-emotional value. Any insult towards this is called Sacrilege.

Recently three alleged cases of sacrilege have been reported in the State of Punjab, one
at the Golden Temple, next at Kapurthala followed by at Eena Kheda Village. In both the
previous cases, the accused were beaten to death. On December 18th, a young man jumped the railing of Akal Takht at Harmandir Sahib Gurudwara, Amritsar and attempted sacrilege, as claimed. After being caught, he was apprehended by the angry crowd and later his body was placed outside the Gurudwara.

The very next day on 19th December, a man was beaten to death, yet again for allegedly
disrespecting the Nishan Sahib at a Gurudwara in Kapurthala. Upon further investigation it was found that there was no evidence of sacrilege. Rather, it was an unfortunate turn of events, where the alleged accused beaten to death was mentally disturbed and in all probability was at the Gurudwara for having Langar Prasad.

Yet again on 27th December, a mentally challenged youth, as claimed by his father attempted sacrilege and tried to run away with the Guru Granth Sahib, at the newly established Gurudwara Baba Bidhi Chand in Malout district. The youth was stopped within the Gurudwara premises when he attempted to run away with the sacred book, but was stopped by his father and other Sewadaars. As per Granthi Gursewak Singh, the boy initially disrespected the sacred weapons kept in front of the Guru Granth Sahib and then picked up the holy book.

According to the statement of DSP Jaswal given to OpIndia, “The incident took place at
around 9 AM, but the Police were informed at around 8:30 PM. We have detained the accused, but as he is mentally challenged, the Granthi has not recorded any statement yet.”

These are few unfortunate cases, where knowingly or unknowingly sacrilege has
happened, which shouldn’t have happened in the first place. However, in the larger scheme of things, is it possible that the brutal lynching and subsequent death of the mentally challenged beggar at Kapurthala could have been avoided? Indeed, it could have been, considering the fact that the lynched person had poor mental faculties and his intention was just to be fed well.

The Sikh community since its inception has been known for their magnanimity,
generosity and warmth but what happened at Kapurthala was quite to the contrary.

In a sad turn of events, it was informed via different reports, that as stated by Police, the
man was spotted eating chapattis at the community kitchen which is on the ground floor by
one of the Sewadaars. The point to be noted here is that, only the sewadaar and the Granthi live on the ground floor and the Guru Granth Sahib is on the upper floor.

As per information provided, the deceased was trying to escape and when apprehended, he tried to run away. Later on, he was kept hostage by the angry mob who didn’t even allow the police personnel there to intervene and beat the man to death. The point to be noted here is that, there were eight deep gashes on his body that purportedly were inflicted by a sharp edged weapon like sword. The man who was badly beaten was declared dead when he was brought to the hospital by the police. As reported by the Hindi daily Dainik Bhaskar, some policemen received injuries while trying to save the deceased and controlling the violent crowd.

It was informed that the police couldn’t find any evidence of sacrilege at the Gurudwara,
and this was mentioned by the police in their press conference that Nishan Sahib and the Guru Granth Sahib were found intact. In the earlier statement of police, they (Police) had mentioned that a murder case was registered against unknown persons but later changed their stance and said no case was registered against those who beat them.

In a viral video on social media, it can be seen that the Gurudwara in charge is telling the
people that the alleged accused was caught taking Rotis from the langar kitchen and was
subsequently caught and beaten. Further, he goes on to proclaim that the man tried to touch and disrespect the Nishan Saheb. All in all, everyone has an equal place before the almighty, and killing someone whose intention was just to have the blessed Langar Prasad at the Gurudwara, can’t ever be appreciated by God, irrespective of the religion one believes or follows.

Sikhs have always been known for their exemplary valor and strength, as well as for
being a community of open-minded people but such events force people to reassess the
perception of the great community, whose Gurus attained Shaheedi for the greater good of the mankind and are respected and revered across the world for their Balidaan and chivalry.