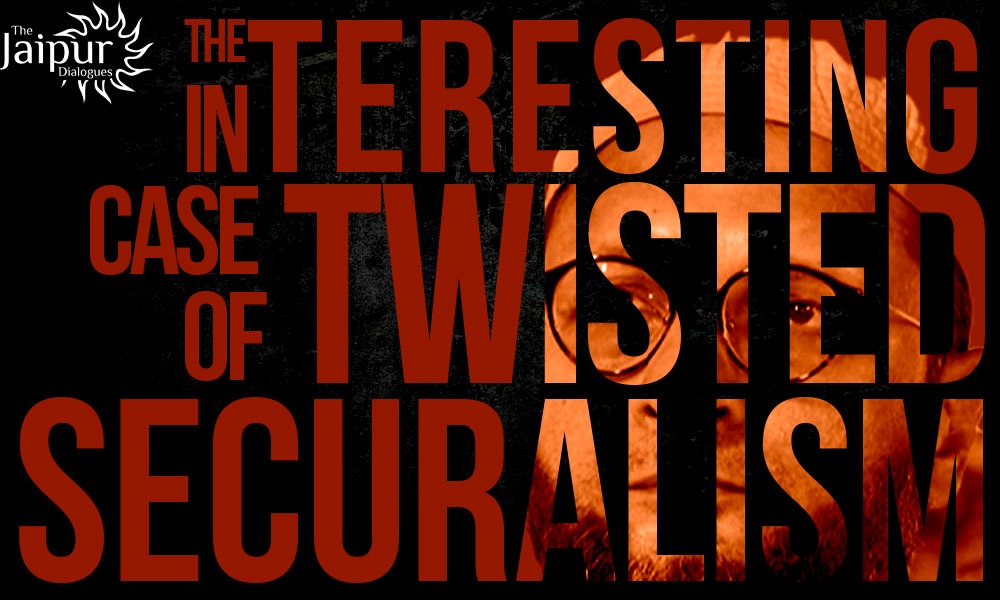 India practices a very contorted form of secularism, that accords different level of religious and freedom of speech to people of different faith…this is a sad irony. India, which is the only major country in the world with a majority Hindu population, has a more dominant and a controlling minority, which openly and brazenly issues diktats against the Hindus. The reason being, that Hindus have been forced fed to be more tolerant, accepting and secularism but the same can’t be said for the ever increasing intolerant so-called minorities (read Christians and Muslims). The atrocities that Hindus have been facing at the hands of the monstrous regimes of the two cults since the past few centuries has been systematically erased and have been trained to believe that they were always meek and weak and lived by the grace of these tyrants.

A recent speech delivered by Owaisi was a reflection of what these cult members believe in and follow. A thought which was brought out in the public as these so-called minorities felt that their unbridled and un-restricted freedom to spew venom against Hindus was being repressed.

Muslims have always believed in their own regressive, oppressive and outdated Sharia laws and the cherry on top being their no regard for the laws of the land they stay at (undoubtedly their USP). The Islamists, under the present ruling dispensation have been made to act and behave like normal civilized citizens, which obviously doesn’t come easy to them and that’s making them feel oppressed, conveniently forgetting the fact that majority of the time, their Imams, preachers and so-called leaders have delivered open threats, displayed brazen attitude and shared seditious speeches yet no one in the past batted an eyelid. Recently, a FIR has been registered against the Dharma Sansad speakers but none against Owaisi.

What Owaisi said was a direct threat to the law enforcing machinery and indirectly to the Hindus, i.e. without the shield of these leaders, the Islamists would take revenge, hinting at inciting violence. This speech should serve as a wake-up call for the so-called secular Hindu brigade to come out of their ivory tower, the exodus of Kashmiri Hindus in the past, should serve as a reminder. Islamists practice their version of secularism i.e. one of convenience and hatred. Owaisi has threatened to launch a stir demanding punishment for the Hindu seers in Haridwar regarding the recent Hindu Dharam Sansad and a reflection of that can be seen in if his speech at Kanpur, “Please remember, Yogi will not be the Chief Minister always. Modi will not be the Prime Minister forever. We Muslims will not forget your injustice. We will remember this injustice. Allah will destroy you through his strength. Things will change. Who will come to save you then? When Yogi will return to his mutt and Modi will retreat to the mountains, then who will come?”It would be naïve to dismiss these words as bluster; they are a pointer towards the future.

Hate and violence inciting speeches are a trademark of Owaisi and his party-men who gain popularity, mass acceptance and a feeling of superiority amongst their followers, who blindly follow them and identify with their covert agenda of establishing utopian Islamic caliphate. The younger brother of Owaisi has also been in the limelight for delivering provocative speeches targeting the Hindus. These speeches reflect the mindsets and insecurities which these cult followers feel, just when Hindus have started realizing their worth and the importance of Sanatan unity. To put it in context, this won’t be the last and a one-off reaction, as elections approach, these Agent Provocateurs shall be at the top of their game to spew venom against Hindus and their leaders, as they see it as their last chance to redeem their position. However, each dark cloud comes with a silver lining i.e. with their brand of fake secularism and double standards, Hindus have started to gradually realize and appreciate their identity and a slow but marked process of their coming together is now visible.