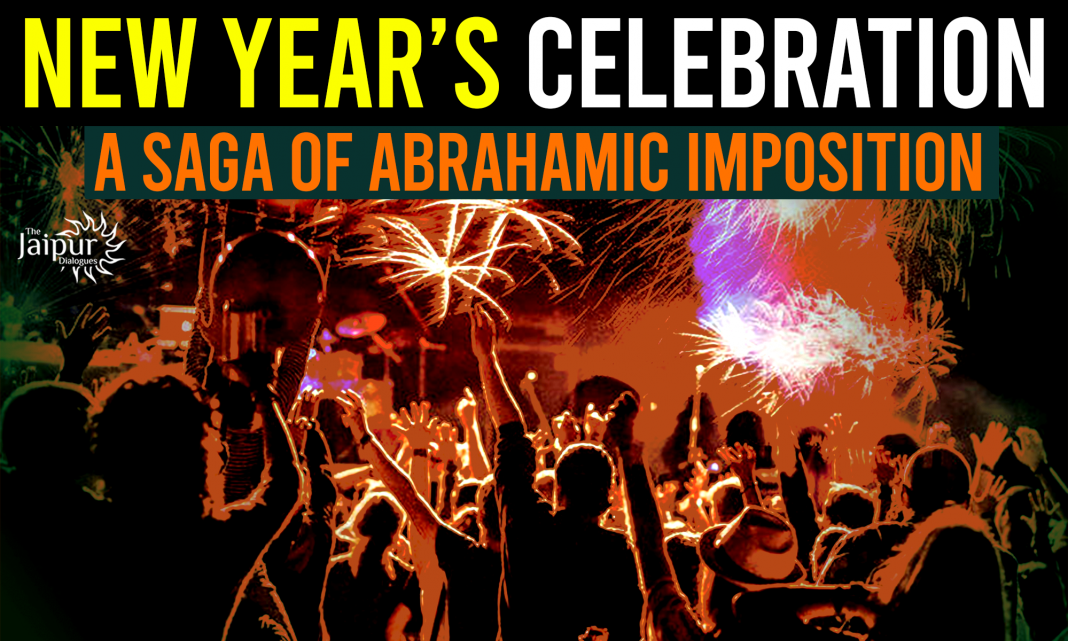 “When I read the Bhagavad-Gita and reflected about how God created this universe
everything else seems so superfluous.” – Albert Einstein

The world has entered in 2022 and party revelers have enjoyed celebrations on the New
Years Eve and why not?? Indeed everyone deserves to enjoy and let their hair down once in a while (with caution), and especially when times have been tough due to the pandemic. But do we know that how we came to celebrate New Years on 31st December, every year? Was it always like that or is there something more to it?

Celebrating New Year Eve is a merry and a joyous moment for people worldwide, as it
ushers a new period for all. This signifies new beginnings, renewed hopes and a brighter
outlook for the future and definitely anything which gives positivity should be celebrated. But today we shed light as to how exactly New Years came to be celebrated on the said date and what are its repercussions.

This is for all the readers to understand that till 1752, New Years was celebrated
worldwide in the month of March and the date was eventually shifted to the month of December and has now come to be adopted as the ‘New Style’ calendar, which is in current use. We need to understand that this was one of the initial steps taken by the Westerners, to alienate Hindus from their scientific Sanatan practices.

Sanatan Dharma has always been science and rule based, wherein our learned sages and seers calculated the date of New Year celebrations as the first date of Chaitra Shukla Paksh. Initially, the New Year was celebrated across the world as a joyous occasion but later on the date was changed by the Christians in abid to mark their dominance and so I was deliberately pushed to co-incide the celebrations with the birth of Christ. The history of date change dates back to the change to the times of Julius Caesar, ‘In 45 B.C., Julius Caesar ordered a calendar consisting of twelve months based on a solar year. This calendar employed a cycle of three years of 365 days, followed by a year of 366 days (leap year). When first implemented, the “Julian Calendar” also moved the beginning of the year from March 1 to January 1. However, following the fall of the Roman Empire in the fifth century, the New Year was gradually realigned to coincide with Christian festivals until by the seventh century; Christmas Day marked the beginning of the New Year in many countries.

By the ninth century, parts of southern Europe began observing first day of the New Year on March 25 to coincide with Annunciation Day (the church holiday nine months prior to Christmas celebrating the Angel Gabriel’s revelation to the Virgin Mary that she was to be the mother of the Messiah). The last day of the year was March 24. However, England did not adopt this change in the beginning of the New Year until late in the twelfth century.

Because the year began in March, records referring to the “first month” pertain to March; to the second month pertain to April, etc., so that “the 19th of the 12th month” would be February 19. In fact, in Latin, September means seventh month, October means eighth month, November means ninth month, and December means tenth month. Use of numbers, rather than names, of months was especially prevalent in Quaker records.’

So, as it can be seen and understood, celebration of New Year on 31st December has got nothing to do with the Sanatan Dharma but with the systematic brain-washing efforts
undertaken by the Abrahamics to perpetuate their own customs and beliefs on others. To be fair, these foreigners always wanted to make Indians feel inferior and disregard their
knowledge trove of centuries as they knew that what they practiced was far inferior to what
Hindus believed in and practiced. They knew that if they could successfully fool Indians to
forget their Dharmik-Dharohar and believe in their peddled lies then they could easily impose their outdated customs and the celebrations’ on 31st December was one such thing.

At the same time Tamsik-Rajatva gunas get released in the environment which peak at
midnight and act as a conduit for release-exchange of negative energies. Later on, it is these negative energies which channelize and take-over the mental faculties of people and causes them to experience psychological and physical distress, as a result they are blissfully unaware of their own negative actions. Therefore, hearing of fights, scuffles, untoward incidents, accidents and many such negative incidents on the eve of New Years shouldn’t come as a surprise to anyone.

Abrahamic cults have long imposed their beliefs on people across the world and consider
others as infidels and inferior and carry the so-called ‘White Man’s Burden’ (Feel bad for these oh-so burdened white supremacists). Abrahamics worldwide have taken the onus of spreading their irrational and unscientific beliefs on people, by luring or imposing their beliefs on them and that they did by looting countries and subjugating them….convenient isn’t it!!

What atrocities Francis Xavier did in Goa can’t be overlooked and shouldn’t be either. This is
just one amongst the many examples what these Christians did to other nations and forcefully brainwashed people to believe in their out-dated and outrageous customs. This was done systematically which involved creating curriculum tailored to suit their needs so that they could alter the history and create ‘educated slaves’, which they have been successful in doing without any doubt. It’s high time that Hindus are made to look at their glorious past and follow their scientific rituals and not fall in the trap of these greedy Abrahamics, who have build a false narrative tailored to suit their needs. Otherwise, what goes on to prove that Annunciation day which was earlier celebrated in March coinciding with New Years had to be shifted nine months down the line to coincide with Christmas?

It’s time that Hindus start re-discovering their glorious past and experience the new chapter of life by discarding these imposed and unscientific traditions. The celebration of New Year should be as per the date which coincided with the birth of Universe and see the positive change which will not only impact them but also create a positive change on the entire world and show these Abrahamics that their propagated lies and covert agendas carry no value and no further interference from their side, shall be tolerated anymore. All our Hindu scriptures have no mention of 31st of December as a date of celebration for New Years and being Sanatanis, we should definitely respect that. It’s an irony that Indians are living in a false bubble of western hypocrisy by forsaking their identity and on the other hand, the structure of Western society is undergoing rapid degradation whereas the westerners are looking to India to solve their troubles via spirituality and scientific wisdom offered in India.