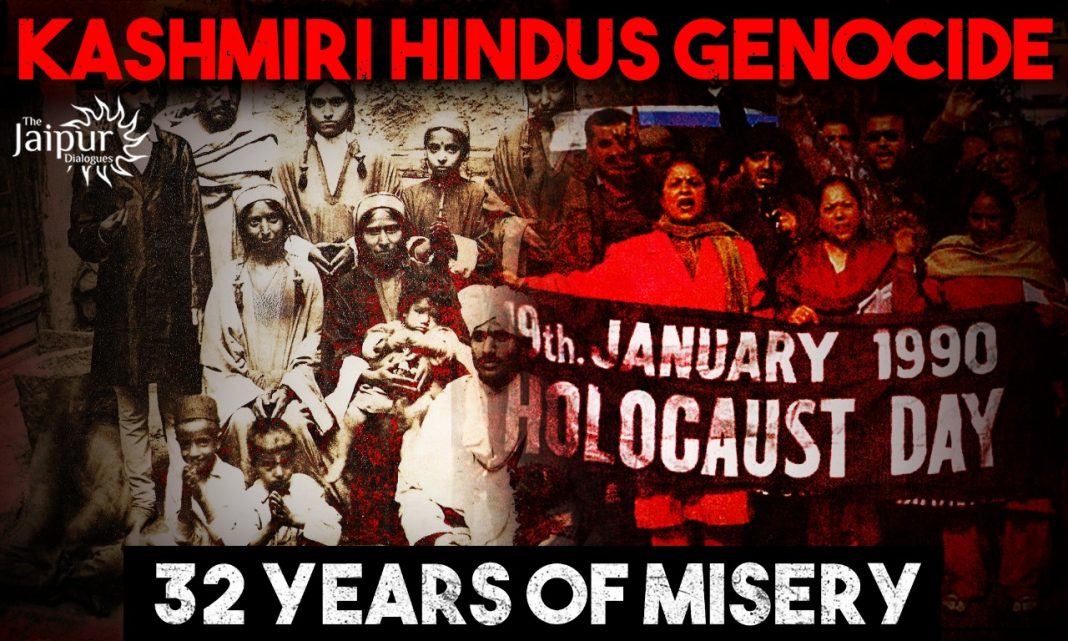 What happened to Kashmiri Hindus 32 years ago is a sad and a painful memory not only for them but for Hindus worldwide. Sadly, the Global powers and Human rights bodies have conveniently overlooked the atrocities meted out by the Islamic fanatics and fundamentalists till now and justice is still awaited.

What happened in 1990 to the Kashmiri Hindus wasn’t a new or one off incident. The truth being that Hindus since centuries, have been at the receiving end of the onslaught initiated by Abrahamics, who always perceived progressive Sanatan Dharma as a threat to their rigid and orthodox religions’. More than three decades have passed since the deadly and barbaric genocide against Kashmiri Hindus was undertaken by the hate filled Muslim fanatics in the valley. A systematic attempt towards Ethnic Cleansing of the valley was undertaken by Pak trained terrorists & their valley based cohorts, just to remind to Hindus all over, that this wasn’t a simple attack but one undertaken to remind Hindus that what the fanatical Islamists were capable of, if their line wasn’t towed. Unfortunately, even after so many years, this brazen attitude continues by these Mullahs and their sympathizers.

The date 14 September 1989 is significant, when the first major killing of a Kashmiri Hindu leader, Pandit Tika Lal Taploo, occurred in the Valley, setting the tone for the mass exodus of Kashmiri Hindus from the region on 19 January 1990.The dark night of 19th January, saw the unleashing of terror when Islamist fundamentalists stormed the streets and the then administrative dispensation sat peacefully to see the savage destruction unleashed by the cold-blooded terrorists. One, where many families were torn apart and scarred forever, men were held hostage and brutalized, ladies were raped and killed, and innocent children were molested and tortured. All this happened in broad daylight and the pseudo-secular intellectual class didn’t even bat an eyelid. The dare-devilry of these Islamists can be understood by the fact that this dance of destruction undertaken by them went on and on, ravaging innumerable lives over two days and this happened in front of people, where a Hizbul Mujahideen sponsored newspaper ‘Aftab’ threatened Kashmiri Hindus to leave the Kashmir valley with immediate effect.

They tried imposing Sharia laws over the state in an overdriven zeal and during the intervening night of 18th and 19th January, a blackout took place in the Kashmir valley except that of mosques, where inflammatory/threatening and divisive messages were played across all mosques in the valley, asking Hindus to vacate their homes overnight or else face repercussions. This incident itself reeks of a well planned and a well coordinated conspiracy, as to why only Mosques were supplied electricity during the entire sudden blackout?

These terror inflicting and human rights violators also attacked our armed forces personnel at Rawalpora, this implies how much they cared for the law of the land. Being a traitor comes naturally to these people. All this happened so naturally and organically because of the free hand given to the Kashmiri separatist leaders like Yasin Malik, Syed Shah Geelani, et al. Coupled with this was the fact, that some of our media houses openly portrayed these fanatics as poor, downtrodden revolutionaries against the wealthy Kashmiri Hindus. All in all, it was a hogwash meant to fool Indians and people worldwide so that these Islamic fundamentalists could enjoy global sympathy.

This pre-planned diabolical attack was a glaring example of how the Indian state failed to protect its own citizens where 350,000 of their own Kashmiri Pandits, who constituted 99% of the then total population of Hindus living in Muslim majority area of the Kashmir Valley, were forcibly pushed out of the Valley by Muslim terrorists (terrorism has no religion!!!) since the end of 1989. Unfortunately, Kashmiri Hindus have been forced to live in exile in their own country, outside their homeland, and all this was done by the vicious Islamists by unleashing a systematic campaign of terror, murder, loot and arson.

It isn’t surprising to know that none of the so-called International Human rights bodies like Amnesty International, Asia Watch, etc. did nothing substantial per se, to alleviate the sufferings of the displaced and pained Hindus. To be fair, anything substantial is a long road, till today the Global order is yet to accept it as a planned Genocide, a tear was not shed nor did anyone cry…why? Because it was the peaceful Hindus and their existence which was at stake, unlike brutal, ignorant and fanatic Islamists who are perpetually troubled minorities!!!

Just a grim reminder to all the Hindus who are blindfolded by their love for secularism and believe in ‘Hindu-Muslim Bhai Bhai’ need to refresh their memory that what happened with Girija Tickoo or Sushil Kotru or Mrs. Roopwati and countless others wasn’t a one off incident rather it’s a prelude to what these Sharia law following, blood thirsty, cruel and barbaric fundamentalists are capable of doing, if given a free hand. It’s time that Hindus gather together and raise their voice against the growing dominance of these Islamists to not let this past spine-chilling incident ever repeat in the future.