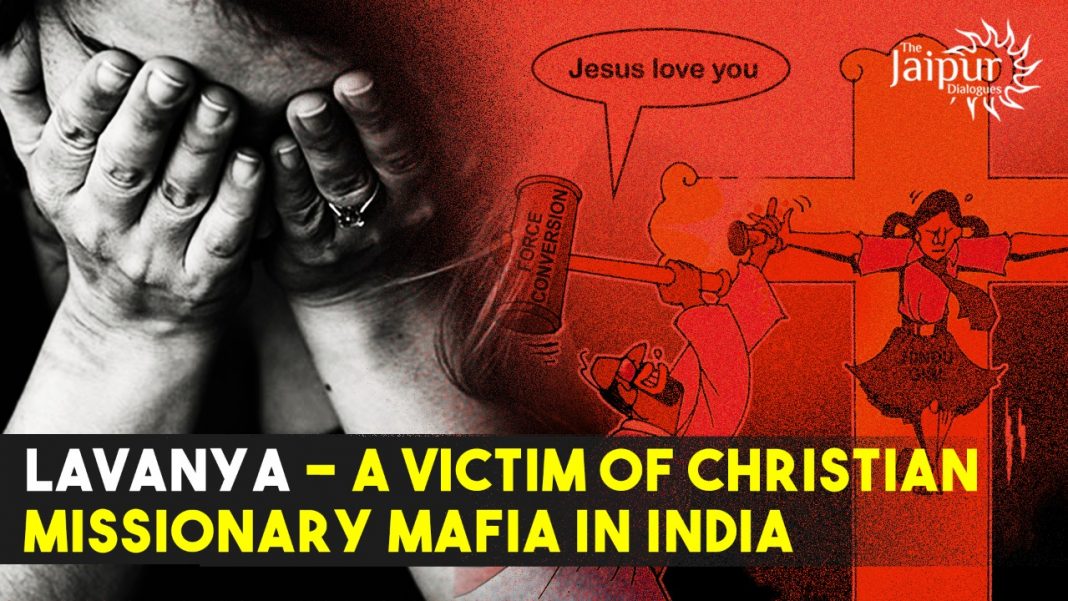 With the rising menace of forced attempts of conversion by Christian missionaries, the recent unfortunate case of suicide by Lavanya, a young girl in Tamil Nadu is a prelude to what shall happen, if we don’t put a stop and tighten the noose against them. The secular fabric of our country has put our national interests in peril and this tragic incident should serve as wake-up call for Hindus.

A not-so shocking case of forced attempt for conversion came to fore, when Lavanya, a young girl committed suicide in Tamil Nadu by consuming poison. Lavanya was unduly pressurized by her school authorities at the Sacred Heart Higher Secondary School, Thanjavur to convert to Christianity. Such was the apathy displayed by these Missionaries that upon seeing her worsening condition, they asked her parents to merely collect her from the hostel premises, without informing them about the reason of her serious condition. It was only when Lavanya was taken to the hospital, were the parents informed that she had taken poison. The school in question has been notorious for their forced illegal conversion and alleged activities to further the same, i.e. by imposing corporal punishments on those students who didn’t follow their unscrupulous diktats causing mental agony to them.

How could this happen at the first place? This shouldn’t be surprising, especially since the missionaries have become brazen in their attempts for conversion, as their actions go unabated for due to lack of fear of law or any stringent punishment. The current dispensation in Tamil Nadu is considered to be soft towards these missionaries.

Though in this case, it was highly unfortunate that a young girl had to die because of these ruthless greedy missionaries, but she stood up against them and didn’t bow down unlike some people who easily convert for money and kind, by foregoing their Sanatan Dharma and its values. This incident also serves as a lesson for those parents who are blinded by the false belief of the Western superiority perpetuated by these Convent schools. Convent schools carry the biased legacy of the Britishers, one which thrives upon Hindu hatred and demeaning the Sanatan Sanskriti. It is high time that Indian parents understand the value of teaching their children the true cultural ethos and ancient knowledge and make their children proud of their legacy rather than subjecting them to regressive and outdated western concepts.

The missionary mafia is operating and spreading their tentacles in full swing to change the demography of India, of one from a majority Hindu nation to that of a Christian majority state and the converted Jesuits are actively working towards it, to say the least. It is because of the callousness of the state machinery and the ingrained secular fabric structure of our country that today we have at-least four Christian dominated states, i.e. Kerala, Manipur, Meghalaya and Nagaland. This situation is aggressively getting out of hand in many other states, the way conversion mafia is working be it Manipur, Arunachal Pradesh, Jharkhand, Punjab, Chhattisgarh, Andhra Pradesh, Tamil Nadu, etc. This is an alarming situation for Hindus because now it is not a silent monster hiding in the backyard anymore; rather it is now the ubiquitous monster lurking on our doorstep.

A systematic effort to decouple our real religious beliefs and our associated identity with it has been undertaken by these missionary mafias who are now attacking on the grass-root levels. They have multiple baits up their sleeves, what earlier was limited to only ‘rice-bag converts’, presumably for those people belonging to the disadvantaged socio-economic strata of the society is now spreading to the higher-ups and there are various reasons behind it. How conveniently these missionaries have woven their narrative with our religious beliefs is visible when erstwhile Mazhabi Sikhs are now singing Tappe, Gidde and Boliyan in praise of Jesus, in Punjab. In Tamil Nadu the Evangelists are threatening the locals in Trivandrum and Kanyakumari to convert to Christianity. What is interesting to note here is the fact that these converted missionaries have different tricks up their sleeves for different communities and are successfully increasing their footprint over the Indian land. What was once a gradual and a masked move, today has become an over-zealous drive by the missionaries, and this must be brought to the fore on an urgent basis, before we lose the plot.

This is a case for India to learn before it is too late to curb this menace of fast spreading attempts of Abrahamic proselytizing by vested interests from across the globe, who don’t want Indians to rise and shine but trap and enslave their mindset and gain control over their resources. What happened in Africa, should not happen here, as goes a famous saying by Desmond Tutu which still rings true for the current turmoil we see in the continent, once so rich with resources and natural culture i.e., “When the missionaries came to Africa they had the Bible and we had the land. They said ‘Let us pray. ‘We closed our eyes. When we opened them we had the Bible and they had the land.”

The above statement itself communicates the way Africans were fooled by the cunning colonialists who wanted to control the resource rich continent by conveniently fooling the locals and this they did by diverting their attention towards Christianity in the garb of promoting modernity and down-playing their indigenous belief system. The fact is undeniable that whenever the Abrahamic wave hits any country, it wreaks havoc and stirs tension there.

In a study done by a USA based Nigerian researcher, Jacob Olupona who studied African history prior to colonization and covered numerous aspects of indigenous African culture. A lot of similarity existed between the native African culture and the Indian traditional system. In the native African systems, elders were treated with respect and adulation & had an important role in the family structure and had shrines dedicated to them.

Just like in Hinduism, the ancient African knowledge was never codified and oral tradition of passing knowledge from one generation to the other existed. This gave the cunning Abrahamics a chance to twist and turn the knowledge as per their convenience and they got an opportunity to propagate their religion by misusing this system by inserting their own customs and traditions into the daily learning’s of Africans. Unfortunately, the latter couldn’t recognize this threat which caused them more harm than good; ultimately they fell in the trap of their colonizers. Olupona stated the underlying importance of indigenous religious practices in every culture and said, “We would lose a worldview that has collectively sustained, enriched, and given meaning to a continent and numerous other societies for centuries through its epistemology, metaphysics, history, and practice”. His view carries considerable weight considering the fact that both Islam and Christianity negatively affect the indigenous way of life in Africa. In fact, Islam has led to the rise of militant terrorism in Nigeria, Mali, Niger etc.

Jacob opines that the binary division of religion doesn’t exist in Africa for sure. He believes that the division of culture in Africa into polytheistic and monotheistic isn’t the way forward. Further, this concept diverges from the African spirituality and beliefs in various deities and spirits. The root cause of spreading the binary concept of religious practice is the handy-work of Abrahamics. Gradually and coercively the African way of life and culture was extinguished by these Abrahamics, which is proven by the fact that within the past 120 years, the Christian population has seen a staggering increase from 7 million to over 450 million today, with Islam following the same trajectory. This sadly has led to a systematic decline in the traditional African population, which currently is only 10 percent of the total population.

This unfortunate truth of Africa, should serve as a wake-up call for Hindus that if they don’t tighten the reins now, it shall be destructive not only for them but also for the future generations. The Tamil Nadu incident isn’t one off but is a precursor for the future; if we let the conversion cartel go unrestricted and unhindered forgetting about our deep rooted progressive ancient knowledge systems.