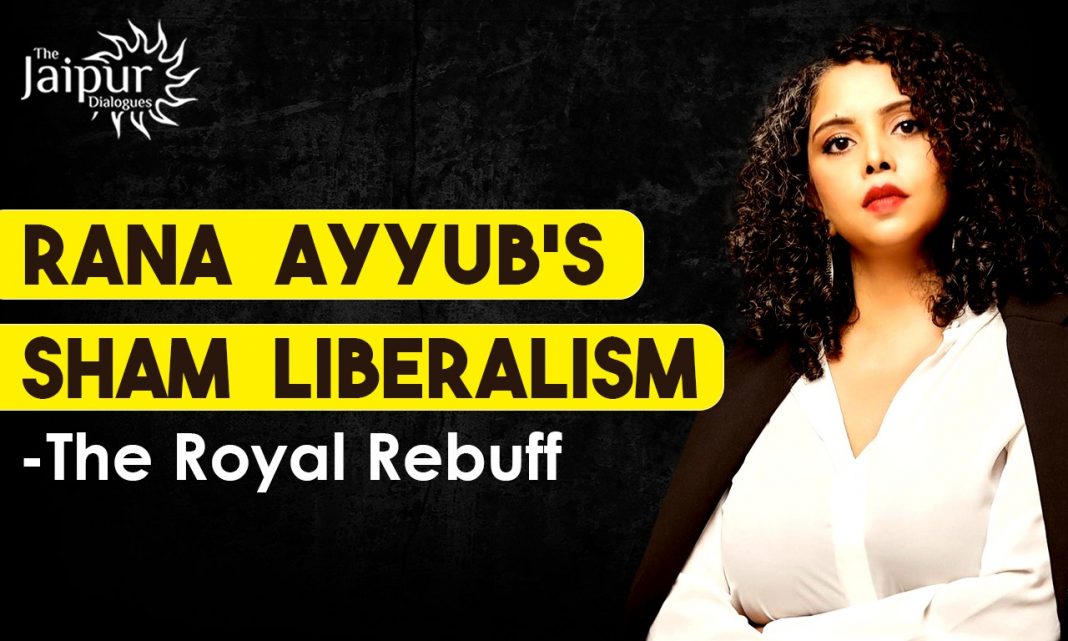 Not being new to controversies, Secular brigade gang leader Rana Ayyub has aptly put herself in a new controversy by jumping in between the ongoing Yemen and Saudi Arabia tussle this time and is being mocked worldwide for her brand of secular journalism!!

She did it again, Ms. Rana Ayyub has yet again courted controversy, and in any case, controversy and Ayyub go hand in hand. Ayyub has the uncanny ability to generate controversy where none exist.Playing a victim card and crying hoarse has been her forte and perform stunts in order to hog limelight. Rana Ayyub has proudly self- assigned herself to be the ‘Messiah’ of the downtrodden, marginalized and the ubiquitous Becharas or the secular brigade of India. One can often spot her up in cudgels against any and everyone who doesn’t subscribe to her sickular ‘ideals’; she is naturally inclined to carry her diatribe with any person subscribing to contra views.This predilection has landed her in an embarrassing state of affairs, she has waded into a situation which was totally unwarranted.

Recently, Houthi rebels of Yemen carried a drone attack near the Abu Dhabi International Airport in the Musaffah Industrial region where three fuel tankers exploded. In this unprovoked and unfortunate incident, a couple of Indian lives were lost. Houthi is an Islamist political armed movement which is purportedly supported by Iran to fight against the Gulf coalition led by Saudi Arabia. Not one to take it lying down and rightly so, the Saudi Arabia led coalition retaliated aptly by carrying airstrikes at a detention centre in Saada at Yemen, which is reportedly a stronghold of Houthi rebels and at a telecommunications facility in Hudaydah, leading to nationwide internet disruption.

Till now here it seems an international dispute with no links whatsoever to India or the Modi Government, but that’s when Ms. Ayyub decides to jump in by tweeting an unwarranted statement i.e.,

“Yemen is bleeding and there is nobody to stop the bloodthirsty Saudis. These are people who call themselves the custodians of Islam. As a Muslim I am ashamed that these savages are guardians of the holy mosque. The world CANNOT stay silent thru this genocide.”

This unwanted tweet of hers wasn’t taken well by the Saudis and other guardians of Islam who accused her of creating unnecessary tension and spreading false news. Many Saudi nationals responded to her by stating that the Saudi Arabia’s administration is supporting the recognized Government of Yemen, whereas she is supporting an Islamist terror group trying to overthrow that government. Unsurprisingly, after facing a barrage of comments giving her a reality check, poor little Miss Ayyub had to disable her reply section… so much so for being an innocent terror sympathizer.

Interestingly, it has turned out to be a catch 22 situation for Ms. Ayyub, where she is supporting an Islamist terror group by crying for the so-called injustice meted out to them by their Islamist brethren from Saudi and Emirates. But this time her publicity stunt backfired and in a wondrous fashion, who thought that she will be rapped from all the corners of the world and her minority card won’t turn out the way she had planned it to be?

Stupidity, it is said, has no boundaries. The idiosyncrasies of Rana Ayyub have no limit, because in her own utopian world she has conjured a theory that the Saudis and Emiratis are in cahoots with the Modi Government. This fertile imagination of hers gave her the ammunition to spew venom against the right-wingers. She tweeted, “Saudi trolls are being cheered on by Modi supporters in India. You missed nothing.” She added further, “Indian right wing is dancing with glee because Saudi trolls are attacking me for my tweets on the genocide in Yemen.” So much so for speaking up against Islamophobia, that she gets brutally trolled and criticized by custodians of Islam, i.e. the Saudis and was aptly given a lesson by them on Islamic values by being told how to behave and dress like a proper Muslim lady.

When we introspect, we observe that the Indian State offers too much of openness and freedom of speech. Wherein, in the garb of secularism, such sham liberals are sheltered and allowed to spew venom against their own country. This protection of laws is abused by these anti-state agents. This incident shows that despite being an Islamic state Saudi Arabians didn’t tolerate this hypocrisy and unnecessary interference of such self-appointed secularists. This should serve as a template for Indians to not tolerate such divisive, greedy, seditious and obstructive adversaries of the state. Such enemies of the state would have been severely punished had they attempted any such thing in the Islamic states.

Not to be amazed that none of the secular brigade flag bearers or the likes of Ms. Ayyub, who cry against the so-called Genocide against the peaceful minorities in India which she astonishingly concocts in her mind, didn’t blink an eye or bother raising their voice against the gruesome killing of Kishan Boliya of Gujarat. The youth was shot dead in broad daylight by miscreants of the so-called peaceful community and the crime was that he allegedly committed ‘blasphemy’ against Islam, fanaticism touched new heights!! Undoubtedly these are worrying times, where the so-called minorities are trying to impose their Sharia laws in the land of Kafirs.

Such shocking and gruesome incidents have gradually become the norm of the day, and the reason being that majority Hindus have deliberately become silent, blindfolded and a weak community and this current situation is absolutely unacceptable. We should be alive to the fact that should such situation continue in the future, then what is happening with Hindus in Pakistan and Bangladesh could happen with us, here as well…..the future always belongs to the brave and not to the cowards!!