Gandhi was way behind his Time 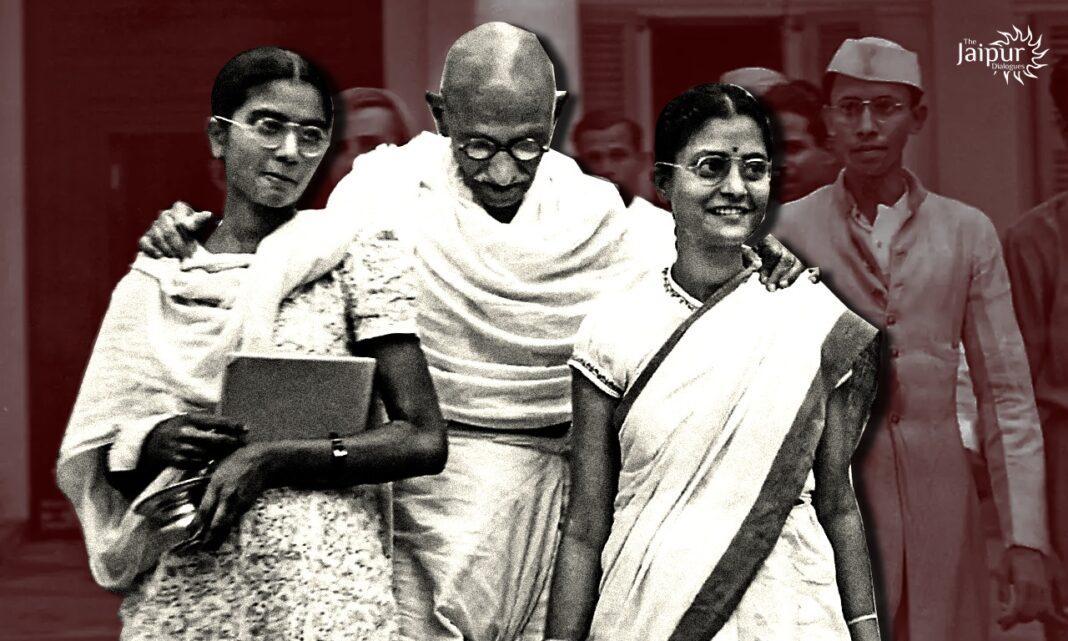 In an excerpt from “Partitioned Freedom”, a book by Ram Madhav, he claimed that Gandhi was way ahead of his times. A mystic with saint-like innocence, Gandhi was a man of convictions. But the question here is, was Gandhi really as great as he’s portrayed to be? Or are we just falling into the trap of Congress propaganda trying to establish Gandhi as the centre of the Freedom Movement of India? Because literally speaking, without Gandhi Congress had no relevance, and hence Nehru had no legitimacy to become the Prime Minister of India. To tie everything around, Gandhi was a necessary figure for Congress. But why are the nationalists walking down the same path? To understand Gandhi, we’ll have to look at the views of his contemporaries.

In an interview to BBC, Dr. Ambedkar said “Gandhi was never a Mahatma; I refuse to call him a Mahatma. He was just an episode in the history of India, not an epoch maker”.[1]https://www.youtube.com/watch?v=TrS8vkRQhSQ But this was not just about Ambedkar, even spiritual leaders like Aurobindo held the same view. In the informal talks with his disciples, Aurobindo exclaimed that “The Congress at the present stage-what is it but a fascist organisation? Gandhi is a dictator like Stalin, what Gandhi says they accept and even the Working Committee follows him; then it goes to the All-India Congress Committee which adopts it, and then the Congress.” [2]From “Talks with Sri Aurobindo” Leaders like Savarkar and Tilak were also strong opponents of the methods of Gandhian freedom struggle.

What was Gandhi’s Non-Violence About?

In simple words, the Gandhian non-violence meant Hindus should be non-violent even when the ‘peaceful community’ tries to slaughter them. In the interest of communal harmony of the nation, Hindus should be ready to sacrifice their necks to the sword of Islam. He proclaimed during the Khilafat movement-

“I tell all the Hindu sadhus that if they sacrifice their all for the sake of the Khilafat, they will have done a great thing for the protection of Hinduism. Today the duty of every Hindu is to save Islam from danger.”[3]Complete works of Mahatma Gandhi, Vol XIX, pg 254

Technically speaking the Gandhian Non-Violence originated from the thoughts and ideas of the Bible. Sri Aurobindo even went on to say that “Gandhi is a European – truly, a Russian Christian in an Indian body… When the Europeans say that he is more Christian than many Christians…they are perfectly right. All his preaching is derived from Christianity, and though the garb is Indian the essential spirit is Christian”[5]India’s Rebirth, Sri Aurobindo, A conversation from July 22 1926.

The Sanatan Dharma believes that Non-Violence is a state of Mind. When Arjuna said it
would be better to die unarmed and unresisting than to fight and cause such chaos,[6]Bhagvat Geeta 1:45 Krishna explained to him that the responsible state leaders need to avoid violence as much as possible, But the purpose of peace is to promote civic order and spiritual progress in society. If leaders in their pursuit of peace lose sight of its purpose, they end up harming society far more than any war might.[7]Bhagvat Geeta 3:23, 3:24

What were Gandhi’s views on Future of India?

Gandhi was a regressive person who envisioned a backward India ridding it from evils such as doctors, lawyers, heavy machinery, medicine and contraceptives. He termed this goal as “Spiritual Swaraj”. In the early days, when he started implementing his doctrines during the Non-Cooperation movement, Congress helx this up thinking he was a Messiah.

But if we look at the political track record of Gandhi, we see that apart from 1942, Gandhi always asked for dominion status. He was always hesitant for complete Independence. In his Nanded speech of 1918, he said “We should suffer to the utmost of our ability and even lay down our lives to defend the empire. If the empire perishes, with it
perish our cherished aspirations. Hence the easiest and the straightest way to win Swaraj is to participate in the defence of the empire”.[8]Collected Works of Mahatma Gandhi, Gandhi’s appeal in a speech in Nadiad, 22/06/1918.
http://www.gandhiserve.org/cwmg/VOL017.PDF

Gandhi kept his defence of the British empire even after they left. He wanted to mark the Indian Flag with a Union Jack, a symbol to keep the Indian minds colonized eternally. He also said that if he possessed the power he had earlier, he would’ve personally taken the task for installing Union Jack.[9]Collected Works of Mahatma Gandhi,Speech at a Prayer Meeting, New Delhi, 19/07/1947,
http://www.gandhiserve.org/cwmg/VOL096.PDF Maybe that’s the reason why the British called him as the best policeman they had in India.[10]Ellen Wilkinson, British MP and Member of Cabinet 1945-’47 after his visit to India

Gandhi wanted to create a weak India based on his biblical principles. He believed that violence was a clumsy weapon which created more problems, hence he was against the whole idea of the Military. His idea of India was built on the concept of non-violence. He believed the Military brutalized men.

His views on the state were equally ridiculous. He wanted to create a Utopian world in which India was thrown back to pre-modern times with an apolitical state. He believed that the state does great harm to mankind by destroying Individuality. The solution for this was a stateless society, where people follow self-governance. As rightly said by Judith Brown “Gandhi visualized a loose linkage of village republics as the ideal form of state..he can therefore be called as an anarchist”

In his letter to Henry Polak in 1909, he wrote, “India’s salvation consists in unlearning what she has learnt. The railways, telegraphs, hospitals, lawyers, doctors, and such like have all to go, and the so-called upper classes have to learn to live conscientiously and religiously and deliberately the simple peasant life.” Gandhi was against any mechanisation and Industrialisation. In an age when leaders like Ambedkar, Bose and Savarkar thought that the economic freedom which was the essence of Socio-political freedom, could be achieved through modernisation and development of Industry, Gandhi believed that modernisation was an evil of the wealth thief capitalists.

As rightly pointed out by R.C. Mujumdar, Gandhi combined in himself the dual role of a saint and an active politician…unfortunately, Gandhi’s followers did not make this distinction and gave unto the political leader what was really due to a saint.

Gandhi was a shrewd politician who kept intermingling with his two personalities. When his politics failed, he adapted the role of Mahatma, when his credentials of Mahatma were in danger, (like his “Experiments on Brahmacharya”) he turned back to Politics

Gandhi’s vision of India was regressive and way behind his times. In an era when we were looking to find a place for ourselves on the world table, Gandhi wanted India to be a weak dominion of the British. His ideas of religion and nation were inspired by Abrahamic thoughts and he tried his level best to delay the Freedom, and if achieved, continue the colonial legacy.

It is high time that Hindus stop worshipping these false prophets and turn back to their real role models. It is time, we question this false idea of ‘Father of Nation’. Bharat has been existing for eternity. It has produced great men like Bhagvan Ram, Bhagwan Parshuram, Bhagwan Shri Krishna and many others. If we really want a title like ‘Father of Nation’, it would be right to give it to the people who brought glory to this civilization, not someone who gave up our civilizational values to please the foreign masters. In the end, I’ll just conclude with the statement of B.R. Ambedkar- “If there’s any ‘ism’ which has made full use of religion as an opium to lull people into false beliefs and false securities, it is Gandhism. Following Shakespeare, one can well say: Plausibility! Ingenuity! Thy name is Gandhism.