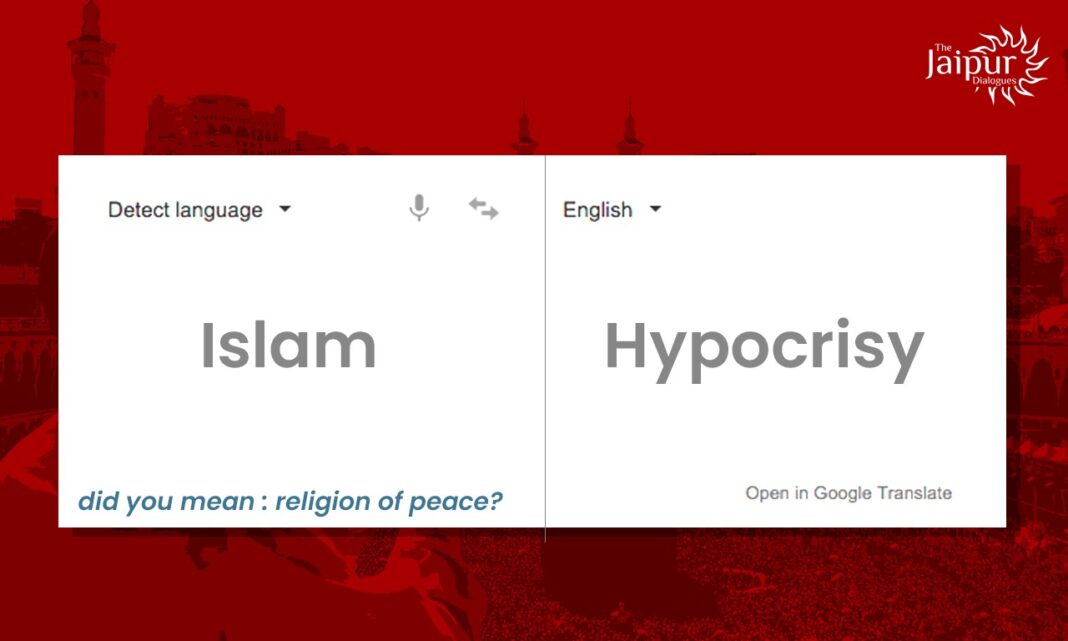 How does Islam define the Great Event? From Surah 78.1 to 78.40, one can get an idea of why Islamic fanatics are working hard to establish an Islamic caliphate. As stated in the Quran, true and devout Muslim believers will be treated extravagantly once they reach heaven. Muslims who practice and preach Islam in its true sense will receive this ostentatious treatment. This opulence is what is driving many Muslims to spread Islam across the globe, by any means, be it by using violence as a crutch.

The beauty of all this is that who can verify what has been written? In practice, one is forced to consider, how is it possible that an indulgent affair can wait for someone who has passed away. The great Event is an event of enticement for Muslims, as well as a time of punishment for non-believers.

The following verses have been highlighted:

78.31. For the God-revering, pious there will surely be triumph:

78.35. They will hear therein neither vain talk nor falsehood.

78.36. (All this as) a reward from your Lord, a gift according to (His) reckoning in full satisfaction

78.37. The Lord of the heavens and the earth and (all) that is between them, the All-Merciful. No one will have the power to address Him.

78.38. On that Day, the Spirit and the angels stand in ranks. No one will speak except him whom the All-Merciful allows, and he speaks what is right.

78.39. That Day (of Judgment) is the Day absolutely true (on which the truth will prevail). So whoever wills, then, let him take a way of return to his Lord.

78.40. We have surely warned you against a punishment near at hand. On that Day, a person will look at what he has forwarded (from the world) with his own hands, and the unbeliever will say: “Oh, would that I were mere dust (instead of being a responsible being with consciousness and free will)!”

In these verses, hypocrisy is evident, especially in 78.33 and 78.34. Alcohol is forbidden in Islam and it is mentioned in the following verses:

Linguistically, khamr (Arabic for “wine”, is alcohol derived from grapes. This is what is prohibited by specific texts of the Quran (see 5:90). Therefore alcohol is categorically unlawful (haraam) and considered impure (najis). Consuming any amount is unlawful, even if it doesn’t create any drunken effects.  The Prophet Muhammad of Islam said, “Intoxicants are from these two trees,” while pointing to grapevines and date palms. Alcohol derived from dates or raisins is also prohibited, again regardless of the amount consumed, as explained on the Islamic site Seekers Guidance.

78.34- The fact that alcohol is considered a sin and served as a reward to a Muslim once he dies seems bizarre, doesn’t it? Why is wine, which is considered a sin on Earth, served with elan’ in Jannat? If one isn’t a Muslim, how does one differentiate between the two references?

78.33- After death, a god-fearing Muslim is promised the company of youth, full-breasted maidens of equal age. The hypocrisy advocated here can be considered apart from the blatant misogyny. In the Islamic world, they believe that ‘Paradise will be a place where both the human spirit and the carnal soul (which will have been trained and purified) will be satisfied with the (pure) pleasures particular to each. – Said Nursi

If one is to read 24.31 and understand (Sahih International)- And tell the believing women to reduce [some] of their vision and guard their private parts and not expose their adornment except that which [necessarily] appears thereof and to wrap [a portion of] their headcovers over their chests and not expose their adornment except to their husbands, their fathers, their husbands’ fathers, their sons, their husbands’ sons, their brothers, their brothers’ sons, their sisters’ sons, their women, that which their right hands possess, or those male attendants having no physical desire, or children who are not yet aware of the private aspects of women. And let them not stamp their feet to make known what they conceal of their adornment. And turn to Allah in repentance, all of you, O believers, that you might succeed.

In this case, if this is the way women should dress while alive, why do the rules suddenly change after death? The majority of women following Islamic traditions wear restrictive and prohibitory clothing. Even if these verses do not reflect the exact way of dressing. Women are dressed in Burkhas and Abayas under extreme Islamic rules. Currently, women and young girls who defy public dictums are subjected to harsh punishment under the Taliban regime or in Iran, Iraq, Egypt, and elsewhere.

In addition, what does it mean to have full-breasted maidens of equal age? Isn’t it blatant sexualization of a woman’s body? Further, what is implied by maidens of equal age? Why are women classified and treated as mere sex objects? How come the self-proclaimed champions of women’s rights never object to this demeaning classification? Too many questions, but not a single reliable answer.

There is a resounding sense of male dominance and outright misogyny in Islamic practices and beliefs, one that is incompatible with any social standard. Islam is blindly propagated under the guise of religious equality and secularism, making people unaware of its inaccuracies. There is a duality in the propagation of Islamic values and culture that all Kafirs, especially Hindus, should understand. There’s a large difference between the reality of Islam and its exterior face, and Hindus shouldn’t be swayed by whatever they see is true. This ugly truth must be realized by Hindus right away, or else it might be too late for them.