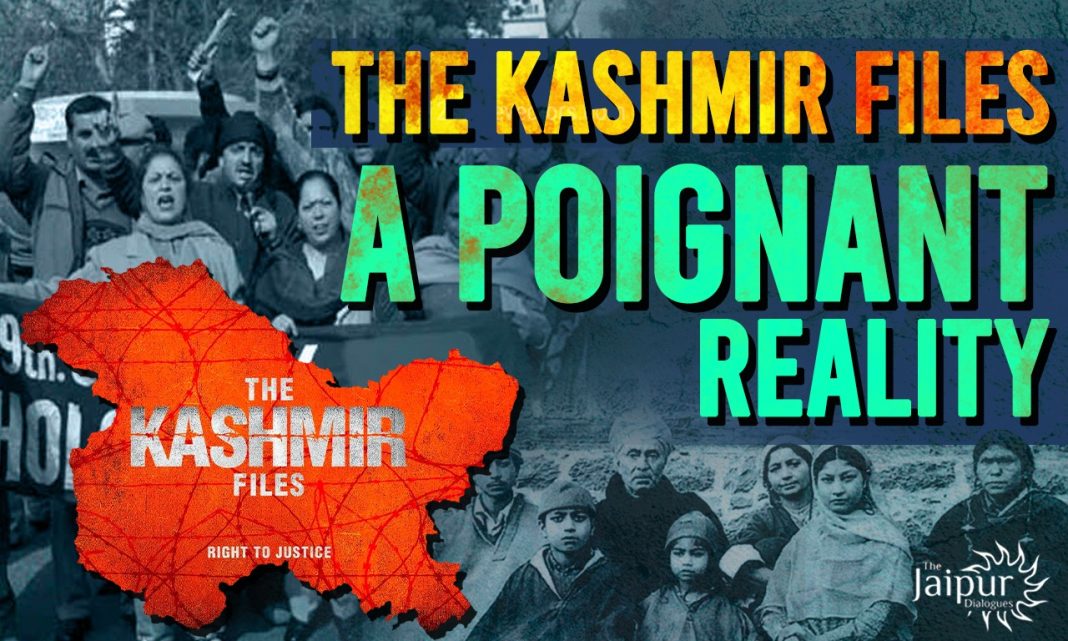 The Kashmir Files brings to the Indian audience a hard-hitting depiction of the brutal trauma faced by the Kashmiri Pandits in their own homeland, at the hands of fanatic Islamists. This movie needs to be seen by one and all to understand the trauma faced by the heavily persecuted community and the resilience shown by them.

It ought to be stated upfront that The Kashmir Files is not a film but a virtual description of the atrocities faced by the painfully persecuted community of India, viz. The Kashmiri Hindus. Thirty-one years have passed since one of the most horrific ethnic cleansings in history took place nearly throughout the Kashmir valley. Unfortunately, we do not yet have any solid strategies and plans for rehabilitating the Hindus of Kashmir, and, most importantly of all, how can we make them forget those turbulent, disturbing, violent and spine-chilling events? Hindus are the victim of blatant ignorance displayed by the Abrahamics precisely because they are tolerant and open, but most importantly are a global minority.

Islamists have been disturbing India’s social peace for centuries, yet many ignorant Hindus do not recognize the threat they pose to our existence. We cannot and should never forget how Hindus in Kashmir were killed in broad daylight, females were raped and brutalized, and children were tortured. Systematic attempts have been made to whitewash the atrocities committed by these Muslim marauders. Can you imagine what it would be like to recount that horror every single day of your life? Families have been ripped apart, uprooted forever, for what? In order to demonstrate their authority, the Islamists forced people to convert or die, their call being “Ralive, Tsalive, Galive”, in other words, “you can convert, run, or you can die.” Added to this was also the ennobling abdication of responsibility by then Chief Minister Farooq Abdullah. What would you do if you were forced to spend your entire life in a miserable tent, only because you were a Hindu? Hindus are regarded as weak because they are ever-tolerant, ready to accept any and every attack, without retorting back. This serves as a wake-up call for the entire Hindu community if they do not remove the veil of secularism and believe in community friendship, because Islamists clearly don’t. The earlier Hindus realize that Islamists work to fulfill the prophecy of Ghazwa-E-Hind; the better it will be for them.

Even today, the Indian state still lacks the capacity to recognize and call out Islamic fundamentalism and the courage to dismantle the terror infrastructure. Islamists carrying out disturbing and dangerous activities are always encouraged in the name of supporting secularism. Hindus retaliating against it are taken as a threat to society and the oppression of minorities. The question then becomes, where did the majority oppression manifest in the case of Girija Tikoo?

Because of Vivek Agnihotri’s meticulous efforts in directing the film, the film shows the horrors that Kashmiri Hindus endure on a daily basis, even today. The work is a masterpiece because it evokes real emotions, those that touch a chord with the viewer and also put him/her in the position of the actual victims. A raw nerve is touched in the movie, which urges Hindus to wake up from their self-imposed slumber. In addition to illustrating the brutality and harsh realities of life facing the Kashmiri Hindus, this film also projects a glimpse into the future. This is a result of the failure of Hindus to understand the looming threat posed by the radical Abrahamics.

As per some estimates, 80 million Hindus have perished, making them one of the most brutalized and traumatized societies in the world, at the hands of followers of the fundamentalist Abrahamic religions. In spite of successive assaults on their culture and identity, this story reveals how a small community survived and resisted relentlessly. Imagine the agony, anguish, and pain of the Kashmiri Pandits when our former PM Manmohan Singh invited separatists like Yasin Malik for ‘so-called’ discussions and indulged in happy photo ops. This is a clear indication of how Congress supported these terrorists tacitly. The Congress party showed a clear display of arrogance by mocking their emotions. The film shows gory details that shake the conscience of one, but as usual, the hyped liberal-left intelligentsia and our usual Bollywood cabal, chose to involve themselves in dirty propaganda and highlight anti-India and anti-Hindu narrative in pursuit of entertainment and freedom of expression. The treatment meted  out to people connected with film is a textbook example of the hatred reigned by the Bollywood gang. This is what Kapil Sharma did to the cast and crew of the film recently, in addition to the blatant ignorance displayed by Anupama Chopra in her review of the film. By playing the secular card and claiming the movie is an attempt to spread propaganda, she not only trivializes the entire genocide but also deliberately ignores the travesty of the Kashmiri Pandits. However, the most ‘un’surprising part is that she is the wife of Vidhu Vinod Chopra, who belongs to Kashmiri descent and is closely linked to the Kashmir Genocide of 1990… Irony just died a thousand deaths!! Unfortunately, such an attitude of apathy, disdain, and criticism is contrary to what one would expect from the people in public domain.

We must learn from our history, which shows that Muslims cannot ever be our faithful friends or well-wishers, as Prithviraj Chauhan encountered after releasing Muhammad Ghori, who killed Chauhan at the first opportunity he got. These examples abound throughout history, yet Hindus deliberately avoid facing reality. Unfortunately, our politicians indulge in appeasement politics and pander to minorities without considering the long-term effects. It is true that more valuable insights and information are delivered by this movie than we can ever discover from our biased media or leftist academicians, unfortunately, whose viewpoints affect how Indians perceive themselves. Hindus should take this as an important wake-up call, since if they don’t learn to fight, then they must be ready to accept their fate, which is to perish.