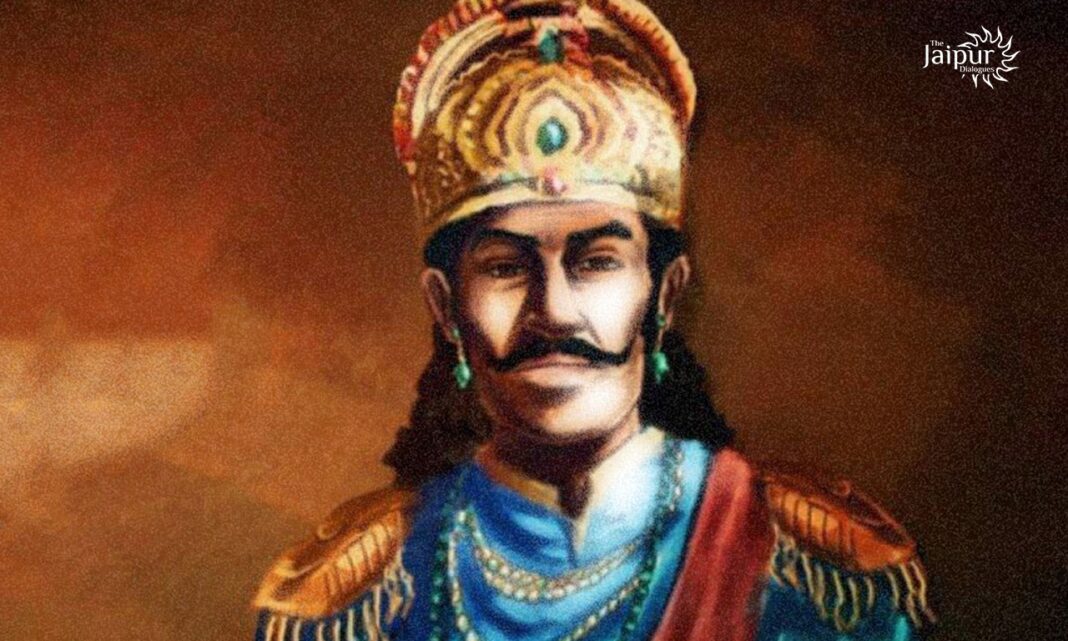 Five to six years before only few history lovers would have known the name of a Great King Lalitaditya Muktapida of Karakota dynasty. Banishing people to know about their past and ancestors was a tried and tested method for the Leftist cabal who was running the academia of the country for several years.

But at this point when the society and the history is being churned, if you ignore the life and times of this forefather of yours, you are missing on the dopamine rush and the strengthening of your faith in your Rashtra and Dharma.

In the year 724, lalitaditya Muktapida was born to the Karakota king of Kashmir, Durbhalak-Pratapaditya II.

That was a phase of reversal in the history of Bharat, when the incursions and invasions of foreign religions had begun. Sindh, which was under the Arab rule was trying to expand to Kashmir. Civil wars in China had caused many states to disintegrate and migrate to different adjacent parts of India.

Lalitaditya, being only 20 years of age, ascended to the throne. During his reign, the provinces of Peshawar, Multan, Swat, and the Kingdom of Sindh were all conquered by the Arabs, and the West began its assault. As Arab monarch, Mohammad Bin Qasim threatened to invade and control Kashmir and central India,King Lalitaditya had to deal with the Arab invaders.

Lalitaditya had shown courage by first engaging in battle against some more traditional foes, including the Bhuttas of Ladakh, the Kabhojas, and the Daradas. Toppling regional kings, he led his army alone and took charge of all those areas.

He was able to prevent the Arabs from entering Kashmir with the help of Yashovarman, King of Kannauj,whose kingdom included what are now the states of Jharkhand, Chhattisgarh, Bihar, UP, and a portion of Bengal.

It wasn’t as easy as it sounds to wipe out the Arabs. Involved Lalitaditya’s foreign policies as well. He reached out to the powerful Tang Dynasty, which ruled China in the seventh century but had to cede territory in central China to the Tibetan Empire. In the battle against the Arabs and the Tibetans, Lalitaditya prevailed. They used the Chinese ruler’s supply of advanced infantry armour and heavily armoured Sassanid-Chinese cavalry to crush the Tibetans and take over Kucha and Turfan. Tibetans were  also defeated by Lalitaditya and lost Assam and Bangladesh.

Lalitaditya conquered Dardistan, which included sections of Pakistan in the north, Kashmir in India, and some parts of north-eastern Afghanistan, and then forced the Arabs to shave off half their heads as a sign of submission.

He continued to try to teach the Arabs a lesson after this. And he took over Transoxiana, which was in Central Asia, and Turkestan as well (modern-day Uzbekistan, Tajiskitan, southern Kyrgyzstan and southwest Kazakhstan).

After that, Lalitaditya entered Turkestan via Kabul and won all four wars against Mumin Bukhara. The king gave in and agreed to pay tribute.

After so many victories, Lalitaditya declared his intention to rule the world. His acquisitions in India were extensive. His empire covered much of central China, earning him the title “Chinese Alexander.”

During his last years in power, he amassed an incredible fortune. He dominated the military in India and central Asia. His dominion covered territory as far away as Tibet, Iran, and Turkestan.

To put it simply, Lalitaditya was a global ruler. A considerable chunk of his life was spent in military expeditions. After a long war, he attacked Antarvedi territory and ultimately defeated Yashovarman. Antarvedi’s capital city, Kanyakubja (now known as Kanauj), fell under Lalitaditya’s rule. Consolidating authority here he proceeded to eastern seas and reached Kalinga and Gauda.

Lalitaditya Muktapida further proceeded to Kamatas in southern region, to Dakshinapatha, seven Konkanas, Dvaraka, Avanti, Uttarapatha and more. He returned back to Kashmir with great amount of wealth that were collected through the conquests.

These lists of his conquests and expeditions prove him almost equivalent to a Chakravartin Samrat.

In his capital city Parihasapura Lalitaditya Muktapida built several images of Vishnu. One was image of Parihasa-Keshava which was made of 84,000 palas of silver. Another was image of Mukta-Keshava constructed of 84,000 tolakas of gold. Simultaneously he built images of gold Maha-Varaha and silver Govardhana-Dhara. He also built the most famous Martand Surya Mandir, which was later destroyed by the Islamic invaders.

Shri Lalitaditya Muktapida was a great king and conqueror, who led invasions beyond the natural boundaries of Bharat. There are many people who say that India never invaded other countries in a thousand years, but they eventually forget this great warrior and king and his endeavours. It was the duty of a Kshatriya to expand the boundaries of his land to establish a long lasting empire. Erasing a part of history does not only mean removing a chapter from the history books, but it is the crippling of the psychology of all the generations and abstaining them from flourishing.

Still, there are many numerable facets of his life and death which need to be unearthed and brought to the light so that his legacy remains as a living memory in all of us and inspire the generations of Bharatiyas to march forward on his path.