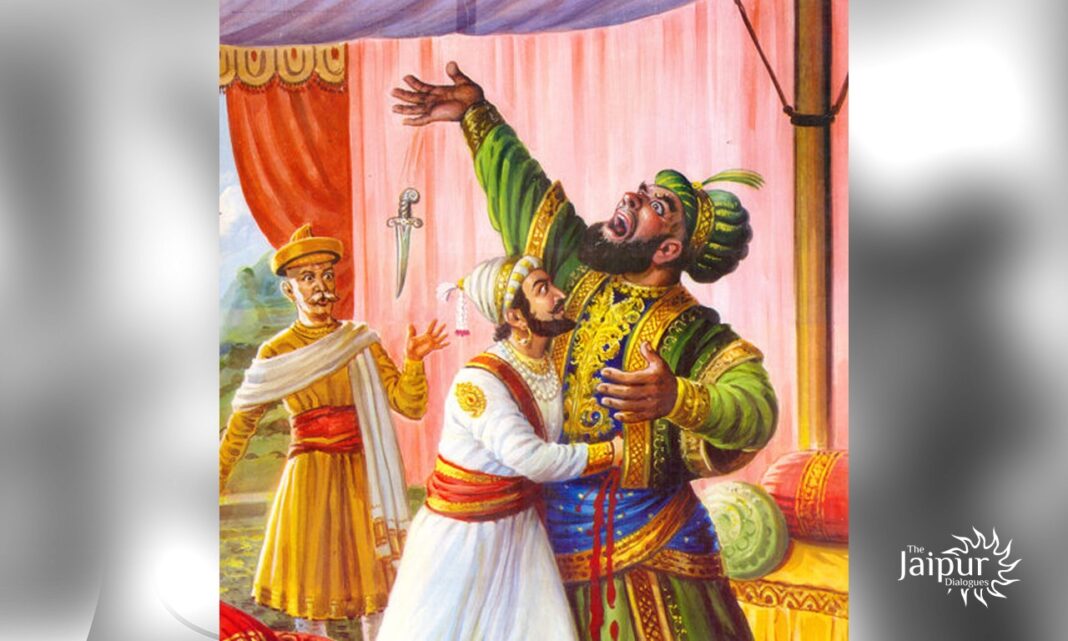 A great King loved to the extent of God and who stands unique in the whole paradigm of Indian history, is Chhatrapati Shivaji Maharaj. Each of his stories fill your mind with thrill, feeling of pride and utter joy starts brimming out of heart. On this very day of 10th November, Maharaj Shivaji killed a demon who razed the temple and vigraha of Maa Tulaja Bhavani.

Afzal Khan was the general of Adilshahi Sultanate. He wanted to prove himself a true ‘ghazi’. He was a regular antagonist towards Shivaji Maharaj’s father, Shahji Raje Bhonsle. In a battle he had stealthily killed Shivaji Maharaj’s elder brother Sambhaji Maharaj. And was adamant on killing Maharaj himself. Adilshahi’s patron Badi Begum was constantly under threat by Shivaji Maharaj’s policy of expansion and capturing forts. Therefore, she relied upon Afzal Khan, who was also a smart and vile strategist and a ruthless murderer. This made Afzal Khan a matter of terror even among other Generals of Adilshahi. He was given a cavalry of almost 15 to 20 thousand and along the way to Wai he had gathered around 30 to 35 thousand of army. He vandalized Maa Tulja Bhavani’s temple and vigraha and Pandharpur’s Vithoba temple. This was a jihadi act, a criminal act which could never be tolerated by any Hindu. Afzal’s brutalities are incomparable. He killed and burnt almost 200 women slaves and wives so that he could focus on his ultimate battle.

He was an arrogant man, and all along the communications held between Maharaj and him, Afzal tried to show his supremacy. But in real, he was filled with fear of defeat. While Shivaji Maharaj, was calm and pensive, strategizing every move with caution.

More than a direct or a guerrilla war, this was a psychological war, played from both the sides. Afzal’s actions of terror were to shock and provoke the Marathas. By using his spies, Shivaji Maharaj got to know the actual height and robust figure of Afzal Khan. According to which he used to practice one on one wrestling fight. He devised a body fit armour and using the Agni-purana he ordered his ministers to build a unique weapon which can help in such one to one combat. And thus came the legendary, wagh-nakh, and a bichwa- dagger which was to be hidden under his sleeve. The inspiration to which lies in Shivaji’s rough design.

Shivaji Maharaj used to send his envoys to Afzal stating that he is very frightened to face the magnanimous general of Adilshahi and could never dare to surpass him.

Gopinath Shiva, was that clever and an old messenger from Maharaj’s side. He played a significant role in moulding Afzal’s psychology against Afzal himself.

Shivaji Maharaja’s espionage system is world known facet of his rule. He used them to the best, which was the most neglected on Afzal’s part. The communication system in Maratha army was very minute and streamlined. Afzal’s arrogance and despotic attitude made his subordinates fearful and lethargic. Nobody dared to speak truth even they saw something fishy. While Maharaj, accumulated all the Maratha sardars, and united them into an army aiming to achieve one target.

The day of 10th November, 1659 was chosen for a meeting between Shivaji Maharaj and Afzal Khan. There was an air of suspicion and fear that Afzal is surely going to kill Shivaji. However, it was decided that this is a meeting for peace treaty and nobody will get weapons or army. Only few bodyguards will be there with the two parties. And obviously, this was a condition kept by ‘fearful’ Shivaji. Afzal’s army was dispersed here and there in the jungle.

There was an arrangement of signalling created by Shivaji Maharaj. Near the tent where the two were going to meet, a person who blew the gong was kept. If at any point movements were felt inside the tent he should start blowing the gong and then find a place to run and hideout. And on the fort, cannons were kept, that, as the sound of gong is heard they must shot the cannon and thus, the Maratha soldiers would be ready to attack.

Maharaj was especially keen on showing a frightened and submissive self before Afzal. This even boosted Afzal’s over-confidence. However, the tent was curated by Shivaji’s side which was decorated with precious gems, luxurious chandeliers and gold plates. This was shocking for Afzal because being the general of Adilshahi he had never seen such splendour.

This instigated his jealousy and anger. And the demonic Afzal under the spell of arrogance, fear, jealousy and anger tried to embrace Shivaji. While he was not so much inattentive but, this was a final shot. And Shivaji Maharaj was confident enough to crush the demon. And then Afzal attacked at first, which was ineffective due armour. But Maharaja’s attack proved fatal to Afzal. That was the momentary incident for which Shivaji Maharaj had resolved to achieve.

When his servants started to run away with the wounded Afzal, Sambhaji Kavji beheaded the monster.

Then the united and alert army of Marathas fought against the already fearful army of Afzal. Through this battle of Pratapgarh  Marathas gained 4,000 horses, 1,200 camels, 60 elephants and 10 lakh rupees and many precious jewels. In 18 days Marathas regained all the areas which were looted and exploited by Afzal Khan during the expedition of almost 3 years.

This is not just story of bravery and pride but an accurate and pointed strategy of fighting against a mighty enemy with a clear vision and uninterrupted control. Shivaji Maharaj’s life is whole research on leadership, farsightedness and Hindu jagriti.

On the day of Afzal-vadh, Maharashtra government demolished all the illegal constructions around Afzal’s tomb. A strike on the people who still believe him to be a ghazi. This is a psychological move to remind everyone that legacy of Maharaj still remains intact in the heart of every Hindu which will be reignited.

Shivaji Maharaj never showed mercy on his enemies, he had a clear idea of ‘shatru-bodh’ (clarity about enemy) and never was infected by the sadgun-vikriti (righteous fallacy).